Review: The Cabin in the Woods 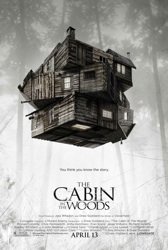 Do not read this review.

If you have any intention of ever seeing The Cabin in the Woods, the new horror movie from geek idol Drew Goddard and co-written by Goddard and Joss Whedon, do not read this review. Do not read any review. Do not watch the trailers. Avoid the TV spots. If someone near you is talking about it, politely excuse yourself. The best way to see the movie is to go in totally blank.

And the best way to do that is to go see it as soon as possible, before it can be spoiled for you in the countless future articles about how The Cabin in the Woods sat on the shelf for three years, tangled up in the financial collapse of MGM, was subjected to an ill-conceived 3-D post-conversion (that ultimately didn't happen) and held captive by a studio that didn't know how to market it, before finally being released and sinking like a stone. Because I suspect that's what is going to happen to this movie. And it's wrong. Fucking wrong.

I say this knowing that the movie is designed to appeal to a fairly small section of the movie going public. Casual audiences or teenagers who showed up opening weekend because it was a horror movie may like sections of Cabin in the Woods, but there's a lot that's going to bore or confuse them. This is not a "turn off your brain" movie (no movie really is, even though that's why a huge percentage of people go to the theater), and I suspect that some of the folks who go in blind are going to resent having to do the work that this one requires. That's ok. Let them have The Devil Inside or Silent House or whatever shit "found footage" horror movie is coming up next.

I don't even want to say much about the movie, because I know that there are still those people who read Roger Ebert's review of Super despite me warning them a bunch of times not to. Some people just can't resist the temptation. This makes reviewing it very difficult, but it's a movie that I want to talk about. It's a movie that needs to be talked about, and one that I think horror geeks and movie nerds are going to be picking apart for a long, long time. There is an embarrassment of riches of layers to the film, and that rarely happens anymore -- particularly in genre cinema, which we fans are usually supposed to be satisfied with just by nature of the fact that a movie belongs to a particular genre.

So here are some thoughts on the movie. I've tried to keep them as spoiler-free as possible, but you still shouldn't read them until you've seen it. You shouldn't have even read this far. LISTEN TO ME.
There is so much more to say about The Cabin in the Woods, but it will have to wait until more people have had a chance to catch up with it.  If you get the opportunity to see it in theaters, you must. Movies like this have to be supported. As film fans, we are constantly complaining about the need for something original or movies that are about more than just mindless escapism. Here is something that's both. It's also inventive and smart and bloody and fun. It's the horror movie that we've been waiting for. The horror movie we deserve. Let's not take it for granted.

Posted by Patrick Bromley at 12:32 AM