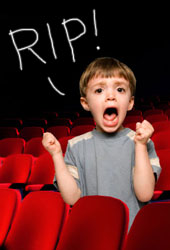 I know you're itching for the latest trailerz, but I have a few questions first. Has anyone else seen those WeatherTech commercials advertising vehicle floor liners? The one where the guy points a red light at a car's carpet and the narrator tries to convince us that the mats are "laser measured" (I don't even know what that means!)? HOW IS THIS COMPANY IN BUSINESS? Is America's demand for all-weather plastic floor coverings that out of control? Am I oblivious to the hundreds of thousands of car interiors whose carpets are RUINED by snow, spilled coffee and (I'm assume) semen? Don't commercials and sponsorships cost a lot of money? Are floor mats from the car's manufacturer really that expensive? Or it because they're made in America, and I'll be dead in the cold, cold ground before I put my boots on plastic liners made in China? I get the feeling that this business is propped up by some insane Howard Hughes-like molded-plastic magnate who will not stop dumping money into this crazy scheme (probably the brainchild of his deadbeat nephew) until he's buried beneath a pile of his own urine jars. I'm just so confused, is what I'm saying!

A Fantastic Fear of Everything
Release date: TBA

It's wrong to only associate Simon Pegg with director Edgar Wright (despite their joined-at-the-hip business behavior [writing projects, appearances on "Doug Loves Movies," etc.]), as it's obvious here that the man is capable of making a quirky, dark comedy without his pal. I was also wrong to assume that a movie starring Nick Frost sans Simon Pegg wouldn't be that great, and Attack the Block turned out to be F'ing awesome. There's so much about British comedy that I either don't "get" or that I choose to ignore; however, I'm really digging the trippy vibe of this new film from Crispian Mills and Chris Hopewell. But what's with the fear of laundry?

OK, seriously, WHAT. THE. HECK? I was really hoping that the recent teaser for the Total Recall trailer was a fluke, but now Rian Johnson (The Brothers Bloom, Brick) is doing it too? F that guy, if only because this practice NEEDS TO STOP. Are people really that stoked about the PREVIEW for Looper that they're willing to sit through a lame one-minute YouTube clip of forced interviews, bad jokes and Bruce Willis adoration? That being said, the little footage they showed of the film looks cool, but the name "Looper"? That's pretty lame.

Who keeps letting this nut make movies? And, judging by the trailer, it looks like there are three TOTALLY DIFFERENT STORIES BEING TOLD. Stop it, Oliver Stone!

RIP waterlogged cocaine. #dodougsjobforhim
Posted by Patrick Bromley at 7:48 AM