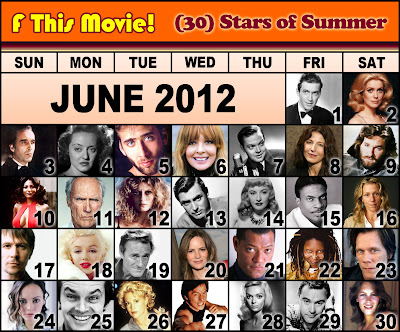 This June is going to be awesome.

Announcing (30) Stars of Summer, a new game that we're playing at F This Movie!

Check out the calendar above (click on the image to see it full size). For every day of June, the goal is to watch a movie starring the corresponding actor. Whenever possible, watch a movie you've never seen (or at least haven't seen in a long time) -- the idea is for us all to expand our horizons and turn other readers on to new stuff.

How will you do that? Well, after you watch the movie, head over to the comments section for that day and post a short review/reaction. Seriously -- short. Like, 50 words or less. That way, other readers can chime in with a "Hey, I've never heard of that movie and now I want to see it!" or a "If you liked that one, check out..." The idea is to keep the discussion flowing quickly and easily, so we can't get bogged down in huge epic write ups. In order to make sure that this happens, we're going to reserve the right to delete posts that willfully ignore this rule. We don't want to do that. Keep it short.

We're getting the roster out ahead of time so you can secure any of the titles you may need. Don't have anything to watch starring Melanie Griffith? You've got until June 26 to track down a copy of Milk Money!

This is our big summer event, sandwiched right between F This Movie! Fest and Scary Movie Month. Let's make it a big success! (30) Stars of Summer!!
Posted by Patrick Bromley at 12:43 AM