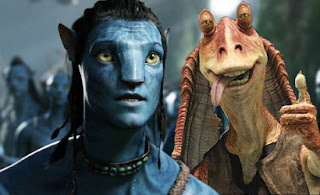 On Monday, the internets exploded with an interview from James Cameron from the New York Times, in which the filmmaker made the following, headline-making statement:


Last year I basically completely disbanded my production company’s development arm. So I’m not interested in developing anything. I’m in the “Avatar” business. Period. That’s it. I’m making “Avatar 2,” “Avatar 3,” maybe “Avatar 4,” and I’m not going to produce other people’s movies for them. I’m not interested in taking scripts. And that all sounds I suppose a little bit restricted, but the point is I think within the “Avatar” landscape I can say everything I need to say that I think needs to be said, in terms of the state of the world and what I think we need to be doing about it.

We don't usually do "news" stories on F This Movie!, but there was a particular sentence in that quote that really bothered me. I'm sure you already know what it is.

The Avatar business. It's disheartening in so many ways.

Even the use of the word "business" is depressing. There is no mention of art. Going forward, this is a business. Yes, I know, "the Avatar business" is only a figure of speech -- a way of saying he's only making Avatar movies from now on. Only it isn't just a figure of speech. Avatar has become its own industry now, and that's all that Cameron is interested in protecting. This is the director telling us that the James Cameron we once knew is gone. This will be the end of him as a storyteller. The end of him as an innovator. He will more than likely keep devising new ways to present Avatar -- I have no doubt he will pioneer whatever is going to follow 3-D -- but all that's changing is the delivery system. He's devoting his career to repackaging the same product from here on out.

Let's be clear about something up front: as anyone who listens to our podcast with any regularity knows, I like Avatar. I didn't care for it much when I first saw it, but have come around on it for some reason and now I dig it. Not ironically, either. I really like Avatar. I'm aware of all of its flaws -- they're the same ones that made me not like it back in 2009 -- but for some reason I've changed while the movie hasn't. Sure, it's become something of a running joke at FTM (I take a lot of shit for being the guy that likes Avatar), but I refuse to pretend I dislike the movie just to earn some extra cool points or protect some reputation I don't even have. It's one of the things I value most about everyone who contributes to F This Movie!: we like what we like, and we don't apologize for it or get embarrassed about it. I know it makes me lame to say I like Avatar, but I won't be embarrassed about it.

So I will gladly go see Avatar 2. First day, first show. Same with Avatar 3. I'm on board for some Avatar sequels. I'm not on board for "the Avatar business."

James Cameron is a bit of a douche. He has an incredibly inflated sense of self. He has made awful Oscar acceptance speeches. He has been a bully in the press. But he is a very talented filmmaker (not writer, mind you; that is very different, and he's not good at it). Almost all of his movies have been good to great: The Terminator. Aliens. The Abyss. Terminator 2: Judgment Day. I don't even dislike Titanic as much as some people on this site. I think his only outright bad movie is True Lies, and even that has some incredible set pieces. The problem there is that Cameron is NOT FUNNY. The humor in his movie is almost always what falls the flattest -- think of some of the "comical" marine banter in Aliens, or the stupid one-liners in Terminator 2. It's the weakest stuff in either movie, so it makes sense that his most overtly comedic movie is also his worst.

The point is this: the guy is a good director (again, NOT writer). He's on a fairly short list of directors whose every movie, good or bad, is worth seeing just because he made it. A new movie from James Cameron is something to look forward to. So hearing that he's only going to be making Avatar movies from now on is heartbreaking, because he has more to offer the world than big, blue alien cats and "We are not in Kansas anymore." He is capable of creating WONDER, and not a lot of filmmakers are able to do that. Remember the first time you saw the enormous, hissing Queen in Aliens? The underwater alien "tentacle" in The Abyss? At least a dozen moments in Terminator 2? Those expansive shots of the Titanic breaking apart? Jake's first flight in Avatar? That last one is important, because that's the only kind of wonder he's going to create anymore, and now that we've seen it, that's going to be harder and harder to do. By returning to Pandora over and over again, he'll just be giving us variations on a theme. 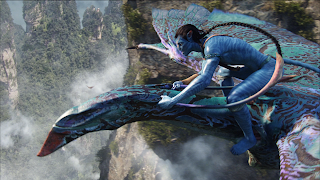 When Cameron says he's only in the "Avatar business" now, I can't help but think of another filmmaker who had a big success with an FX-driven sci-fi epic and turned it into his "business."

Yes, with this latest career plan, James Cameron is in danger of becoming George Lucas, a guy who stopped being a filmmaker roughly 30 years ago in favor of being in the Star Wars business.

During our 2011 podcast on Star Wars Episode I: The Phantom Menace, I theorized that part of what ruined the prequel trilogy was the fact that Lucas had spent 20 years trapped inside a Star Wars cage. The original movies were so big and so beloved that the fans weren't interested in Lucas doing anything else, and Lucas was more than willing to meet them halfway. He gave up being a director in favor of becoming the CEO of the Star Wars machine, finding new ways to market it and protect the brand. He stepped outside the cage every once in a while -- he produced Howard the Duck and no one wanted it. He produced Radioland Murders and no one wanted it. Get back to making Star Wars, George, they repeated. (Yes, I know he was an instrumental part of the Indiana Jones series, but a) that was launched before he was locked in the Star Wars cage and b) is exempt because most of us tend to think of those as Spielberg's babies, except Kingdom of the Crystal Skull, which was all Lucas; Spielberg has said as much. THAT SHOULD NOT BE IGNORED). So Lucas stayed inside the Star Wars cage, and something started to happen. He was starving, so he began cannibalizing the whole thing. He obsessed over every detail. He wanted the Ewoks to blink. He wanted Sy Snoodles, the lead singer of the Max Rebo band in Return of the Jedi, to blow raspberries at the camera. He had to come up with a scientific explanation for The Force. He invented new planets and new alien races, and constructed elaborate -- and, ultimately, inconsequential -- back stories for many of the story's major players. He created entire governments, and then gave those governments trade route and taxation disputes, as though those should be things. The longer he spent focusing solely on Star Wars, the more he dissected the things that made it special until it no longer resembled what it once was. And that was the point at which the technology finally caught up with what Lucas wanted to do. The prequels were born.

And now James Cameron is voluntarily locking himself in an Avatar cage. He wants to go back to Pandora and explore a bunch of stuff that doesn't matter. He wants to expand the universe and come up with new kinds of alien animal hybrids (like the dog/oil slick creation) and new plants that look like a black light poster hanging in my brother's room during his days as a Dungeonmaster. And, like Lucas, there's a good chance he's going to drift away from storytelling and more towards world building.

I think part of this -- and I could be waaaay off base here -- is that Cameron is acting out of fear. Prior to the success of Titanic, I would never have called Cameron a fearful filmmaker. He's a guy who directs every movie with the confidence of a giant swinging dick, and who has constantly pushed the technology of the medium exponentially forward. But there was a 12 year gap between winning all of the Oscars for Titanic and getting Avatar onto movie screens, and I don't think it was just about waiting for the technology to catch up.

Now, maybe that's not fair, because with every at-bat since Terminator 2, he has taken huge risks -- financially speaking, at least. With each new movie, Cameron has made the most expensive movie ever made, and yet he's always been rewarded for it. We're talking about a guy who was going to be ruined by the cost of Titanic (and take down a studio with him), but instead made the highest-grossing movie of ALL TIME (unadjusted) and won 11 Oscars (out of a record-tying 14 nominations). There was a lot of pressure on Cameron to follow that up. And, because he's James Cameron, he couldn't just follow it up -- he had to top it. And I think part of him was afraid that he couldn't. When he finally does, he makes the new most expensive movie ever made, and then that makes more money than Titanic and becomes the most successful film of all time.

Where do you go from there?

By just making Avatar movies for the remainder of his career, Cameron is safe. He doesn't need to reinvent himself. He doesn't need to take chances. The movies have a built-in fanbase, and it's everyone. Avatar sequels will be successful, because of course they will be successful. This sounds like a guy making the creative decision to no longer be creative. That isn't to say that future Avatar movies won't be creative. They will be. In fact, if Cameron follows the Lucas model, they'll be creative to the detriment of the movies themselves.

Even the tentative release dates keep getting pushed back. Avatar 2 was first talked about as coming out in 2014, but that's only two years away and production hasn't even started. There may not even be a finished script. So it can remain this vague eventuality that Cameron can talk about, and everyone will wait because we're willing to wait and because he's known for being the guy who TAKES HIS TIME (even Terrence Malick is cranking out one to two movies a year these days). He can be Michael Douglas in Wonder Boys, who wrote a great novel and spent the next years of his life adding more and more pages to its follow-up without any real plan for when it might be finished.

Like I said, maybe that's all bullshit. In between his blockbusters, Cameron has continued to make documentaries and go on underwater expeditions and do the stuff that interests him. So maybe there's no fear governing him. Maybe he's only doing what interests him. I just have a hard time believing that Pandora is the only thing that interests him anymore. I think this is a guy who has convinced himself that this is all he should do from now on so that he doesn't have to face the fact that what he's really doing is giving up.
Posted by Patrick Bromley at 8:50 AM