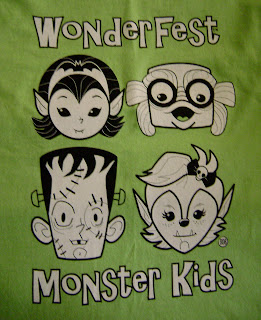 Last weekend for the fifteenth or sixteenth year in a row, I headed down to Louisville, Kentucky. No, I am not a horse.

I am a Monster Kid.

Wonderfest is a sci-fi/horror/fantasy/modelers convention that is now in its 23rd year. I cannot quite remember how I first heard about it (Classic Horror Film Board, perhaps?) but I go almost every year. It is one of my favorite conventions. Why?

1. Because Louisville is a delightful city where the residents have good manners and treat strangers kindly. You can tell it is not an “act for the tourists” -- it is the way they were raised.

2. Because the people behind Wonderfest consistently put on a good show with interesting guests and plenty to do.

3. Because this is one of the few horror conventions that has not yet been taken over by tattooed and pierced Goths who think that monsters are real because they themselves drink blood. Folks who attend Wonderfest refer to themselves as “Monster Kids” -- we fell in love with monsters at an early age and refused to grow out of it. Wonderfest is still family-friendly. One of its more charming features is the “Make and Take” room where children get a free model kit courtesy of one of the convention’s sponsors. Kiddies can build and paint it right there under the tutelage of skilled adults and then take it home with them. Cool! Where was the “Make and Take” room when I was eight years old?

4. Because every attendee looks just like me! If any of you have ever been to a film convention or comic-con, you will agree that most of the men look like the Comic Book Guy on The Simpsons. It is an occupational hazard of loving monster movies. We need big bellies to carry around all of our dreams.

Wonderfest offers an “Early Bird” option that lets the lucky ticket holder into the convention two hours before everyone else. I recommend this option because even though I am fully aware of the definition of “convention,” I have a near-pathological hatred of large crowds. The “Early Bird” option allows me to leisurely peruse the dealer’s room before all the good stuff gets sold. Once they open the doors to what I affectionately call “the rabble,” I am back in my room, taking a nap.

I get cwanky later on if I have not had my nap.

The convention floor on Saturday: 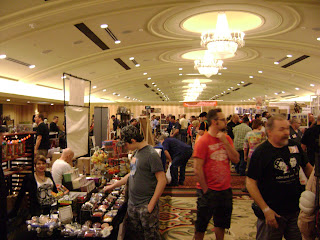 A closer view of the convention floor: I briefly spoke with Joanna Cassidy, one of this year’s special guests, although at first I was hesitant to approach her because I feared she would kick me across the room and then attempt to strangle me with my tie. She was as nice as all get-out (although this was her first convention, and I had the feeling that no one had prepared her for what a horror convention was like.) I pointed out that I had never attended a screening of Blade Runner where her head rising into that mega-blow-dryer bubble thing did not elicit an audible “Ahhhhhh, cooooool” from the audience. She agreed, saying that every screening she had ever attended had featured that audience reaction too. Side note: she is not a robot. 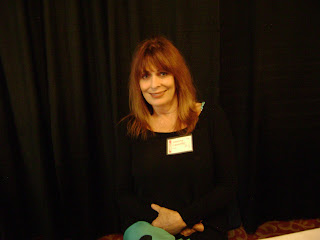 For the last few years, the Classic Horror Film Board holds its Rondo Awards ceremony at Wonderfest. David Coulton, who runs the board, moderates and does a terrific job. This year, Julie Adams from The Creature From The Black Lagoon was inducted into the Monster Kid Hall of Fame and seemed honestly touched. 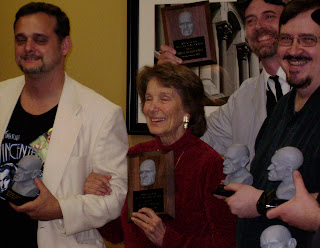 Bob and Kathy have one of the world’s largest private archives of original movie props. This archive is located in their house. They own the original King Kong armature, and Frankenstein’s boots from Abbot and Costello Meet Frankenstein, and the original Time Machine, to name just three. They allow fans to visit these sacred relics free of charge.

Bob and Kathy encouraged and mentored Rick Baker, Dennis Muren, and Greg Nicotero when those three were just starting out. They used to stage elaborate Halloween shows at their house, featuring costumes, props, actors, and sets that would attract thousands of spectators from surrounding neighborhoods.

Before retiring, Bob was a “gorilla suit guy” in Hollywood and appeared in movies and on the Ghostbusters television show in the 1960s with Forest Tucker and Larry Storch. Bob and Kathy are now the “favorite uncle and aunt” to every Monster Kid in the world. They are beloved by every filmmaker currently working in horror and sci-fi films. Peter Jackson even gave them a delightful cameo in his remake of King Kong. 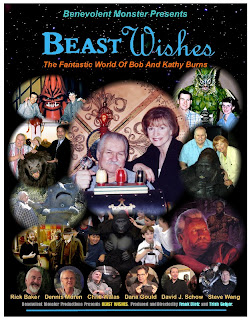 This wonderful documentary, which I encourage all of you to seek out, focuses on two delightful people who have always insisted that life can be an adventure, who have tirelessly encouraged talented kids to follow their dreams, and who have shown generations by their own example that there is nothing wrong with loving monsters.

Earlier in the day, Tim Lucas of Video Watchdog magazine accepted his twelfth Rondo Award, saying that his love of monsters had always made him a more empathetic person, since horror films always focus on “the other.” He said he was proud of that, as empathy seems in such short supply in our modern world.

I was proud to be in the audience that night and give Bob and Kathy a standing ovation at the end of the screening.

F-Heads, y’all need to go to Wonderfest. You never know what is going to happen! On Friday night, this damn thing got into my room: 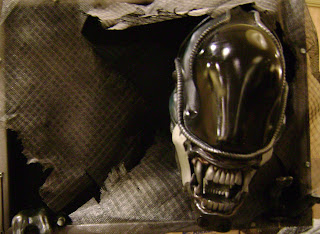 Posted by Patrick Bromley at 3:55 AM