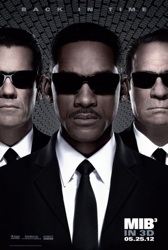 This is a movie that started filming back in 2010, and was then shut down for six weeks in the middle of production because it was going so terribly. This is a movie with a budget so wildly out of control that a recent L.A. Times piece estimates it may have cost as much as $375 million (after prints and distribution costs). The fact that it's not a complete disaster is impressive. The fact it's pretty good is a goddamn miracle.

15 years after first becoming partners, Men in Black agents J and K (Will Smith and Tommy Lee Jones) still don't know anything about one another and just barely get along. A murderous alien called Boris the Animal (Flight of the Conchords' Jemaine Clement under heavy Rick Baker makeup) escapes from moon prison and returns to Earth to seek vengeance on K. He finds a way to travel back in time and kill K in the past, effectively wiping him from existence and destroying the entire planet in the process. That leaves it to J to travel back to 1969 and team up with the younger version of K (Josh Brolin doing an uncanny Tommy Lee Jones impression) to put the timeline back on course and ensure Earth's survival.

Unlike most Hollywood blockbusters, which may start with some promise but unravel and disintegrate as they hurtle towards the end credits, Men in Black 3 actually gets better as it goes along. Almost half of the movie is wasted setting up the need for J to go back in time, and the majority of that stuff is noisy and lazy in the same way that MIB II was. The chemistry between Smith and Jones is no longer there; they seem uncomfortable on camera together, and it's more than just a character choice. Much of the exposition is clunky and badly handled. The setup for the time travel element feels like an afterthought. Another huge plot point is explained away with a character's thirst for chocolate milk. I'M SERIOUS. I wouldn't be surprised if a lot of this stuff is what was shot before they stopped production, because if the movie had continued on the path it was heading during these scenes, it would have been the train wreck I was anticipating based on the trailers.

Once we travel back to 1969, though, things get a lot better. Good, even. Bo Welch's production design is spiffy and retro. Rick Baker's alien design very cleverly switches over to only showcase makeup that would have been possible in the period (it's one of the movie's best jokes, made better by the fact that attention is never called to it). Most importantly, though, Etan Cohen's script tightens up (with uncredited help from Jeff Nathanson) and things start coming into focus. The original Men in Black was a movie about discovery -- the discovery of a shadowy government organization, of aliens living among us, of the possibility of infinite worlds. The sequel failed because it added nothing to the universe (because Lara Flynn Boyle does not count as adding "something"). Men in Black 3 works because it understands that there's nothing external left to be discovered, so it internalizes the discovery. It's a discovery of character and relationships. That's really smart; the movie justifies its existence not just by giving us more crazy aliens or even the new wrinkle of time travel, but by letting us get to know its characters in a new way. Of all three films in the series, that gives Men in Black 3 the biggest heart.

No one needed MIB3 to succeed more than Will Smith. When we last saw the Fresh Prince on movie screens, he was climbing into a bathtub to commit suicide by jellyfish. That was four years ago, which is a long time even if your last movie was a big hit. If your last movie was Seven Pounds, four years is an eternity. Maybe that explains why Smith's confidence seems visibly shaken in Men in Black 3 -- he needs a hit, and it shows. He seems so skittish and unsure here that I would believe you if you told me this was his first big movie role. I might even say he was pretty good for a rapper-turned-sitcom-actor. But he's one of the biggest movie stars in the world, and he's still only pretty good for a rapper-turned-sitcom-actor.

He's completely outclassed by Josh Brolin, who steals the movie in a big, big way. He doesn't just do Tommy Lee Jones; he does Tommy Lee Jones better than Tommy Lee Jones. That is, whereas Jones seems visibly bored and annoyed to be in the movie (and, again, it feels like more than just a character choice), Brolin commits to the impression while managing to add new layers to the character. If there's ever a Men in Black 4 -- and there probably should not be -- it will be hard to go back to seeing Tommy Lee Jones as K. Brolin owns the role after this. How did that happen? Just a few years ago, the Man Who Was Brand was playing the heavy opposite living dolls Paul Walker and Jessica Alba in Into the Blue and being accused of beating up Diane Lane. But in a relatively short period of time, he became one of the most dependable actors in Hollywood, giving performances that always work and are interesting whether the movie is good (No Country for Old Men) or bad (W.).

I was fully expecting Men in Black 3 to be the biggest disaster of the summer. Instead, the movie is one of its most welcome surprises. Go figure.

Heck, if this one can work, maybe there's hope for The Amazing Spider-Man after all.
Posted by Patrick Bromley at 12:10 AM