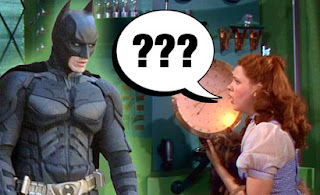 Patrick knows a lot about movies. Doug has seen Warrior dozens of times. In an effort to expand Doug's cinematic horizons, he'll be asking Patrick questions about movies in a column we're calling "Doug Asks Patrick Questions About Movies."

What movie best exemplifies summer to you? Can you watch it in the winter, or does it feel weird?

There's no movie for me that represents summer just based on the movie itself (Jaws comes closest), but there a bunch that make me think of summer because of the memories I have associated with them. I know -- great answer, right? Independence Day will always put me back in the summer of 1996. I'll always remember seeing a 70mm print of Backdraft with my mom on a hot summer day in 1991. Terminator 2 came out that same summer, and because it was R rated I had to talk as many people as possible into taking me to see it over and over. '91 was actually a really big movie summer for me, and there's a long, long list of stuff that puts me right back in that year: Robin Hood: Prince of Thieves, Soapdish, Point Break, Naked Gun 2 1/2, Bill and Ted's Bogus Journey...the list goes on. Almost every movie I see is somehow tied in to the experience of seeing it, but the summer of '91 more than most.

Name your favorite movie couple. Is it Woody and Diane? Billy and Meg? Justin and Kelly? WHO?

As much as I love Billy Crystal and Meg Ryan in When Harry Met Sally, I'm definitely responding to their characters more than I am to them as actors (well, that's at least true of Billy Crystal; I'll always love the Meg Ryan of that period). I'll take Tom Hanks and Meg Ryan over them, even though two of the three romantic comedies they made together did everything they could to keep them apart for the majority of the running time. Myrna Loy and William Powell are great together, not just in the Thin Man series, but in the underrated Libeled Lady, too. John Cusack and Daphne Zuniga are great together in The Sure Thing, because they're playing real teenagers -- smart, sensitive, vulnerable and decent.

Obviously, though, the right answer is Sylvester Stallone and Kurt Russell in Tango & Cash. Because FUBAR.

Whatever happened to Jason Patric?

What's your favorite David Cronenberg movie, and why?

Ouch. Tough one. Obviously, my first response is "that one where the guy has sex with Rosanna Arquette's leg wound," but I'm pretty sure David Cronenberg didn't direct Desperately Seeking Susan. I'm torn between The Fly, which I think is his best movie, and Videodrome, which is weirder and messier and probably my favorite. I think The Fly is one of the best horror movies of the '80s, dealing with all of Cronenberg's usual themes and obsessions is a very accessible, very commercial package -- it suggests that he could have had a whole career of solid mainstream movies. But Cronenberg will always get in his own way, and movies like Videodrome are the reason why. I love it so much.

Have you ever made out with a chick (OR A DUDE) at the movie theater? Is so, what was the movie?

Here's why I'm the worst: NO. It would have bothered me too much to miss the movie, which may explain why I know a bunch of stuff about movies but nothing about girls or making out. I'm very lucky to have married my wife, who is happy to make out but likes movies enough to wait until afterwards.
Posted by Patrick Bromley at 3:41 AM