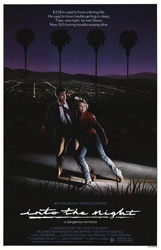 Though he's beloved by most of us movie geeks, many of the people that love a number of John Landis' movies don't even realize the same guy is responsible for all of them. And though his career would shit the bed by the mid-90s, Landis had about a 15 year run that could stack up against pretty much anyone's. Let's give the a great director his due by examining his essential movies. See you next Wednesday!

1. The Kentucky Fried Movie (1977) - John Landis' second feature as director (following Shlock! in 1973) is one of the all-time great "sketch" movies, pairing Landis with future Airplane! filmmakers David Zucker, Jim Abrahams and Jerry Zucker. It's a completely gag-driven movie, lacking the heart of Landis' later comedies but demonstrating his affinity for lowbrow humor and an anarchic comic spirit. Most importantly, it's the movie that put him on the map, making it responsible for the career of a great filmmaker.

2. National Lampoon's Animal House (1978) - Landis was still basically a director-for-hire on Animal House; outside of several touches that would reappear in some of his other films (like the spirit of comic anarchy that runs through the film, or, as JB has pointed out, his use of an orchestral score that prevents the movie from dating), Landis the auteur wouldn't really emerge until his next movie. Still, he managed to make one of the all-time classic comedies, kicking off a monster run that would last for a decade. 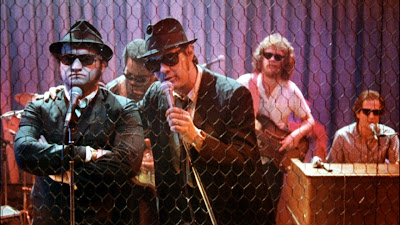 3. The Blues Brothers (1980) - For all his subversive anarchy, John Landis is clearly a fan of classical Hollywood genres. That's why he cleverly turned this feature film adaptation of a Saturday Night Live sketch into a big-budget Hollywood musical, loaded with great songs, energetic dance numbers and cameos from many of the best R&B musicians of the era. And, because he's John Landis, there's chaos and destruction, too, in one of the best, longest and most elaborate car chases of all time. This was really the first of the director's movies to explore the theme of displacement that would define every one of his subsequent works, with Dan Aykroyd and John Belushi as men out of time attempting to revive a music and style that had already gone out of fashion by the early '80s. The first Saturday Night Live movie is also the best by a long shot.

4. An American Werewolf in London (1981) - Here's how good An American Werewolf in London is: it gave John Landis the reputation of being a horror filmmaker, despite the fact that he's only really made two horror movies (and most people haven't seen the second one). David Naughton is attacked by a werewolf while backpacking through Europe with his friend (Griffin Dunne), then spends the rest of the movie oscillating between thinking he's going crazy (via some incredible and vivid nightmare sequences) and turning into a killer werewolf, courtesy of Rick Baker's transformation effects that STILL have never been topped (Baker's work is so good that the Academy INVENTED AN OSCAR just to recognize him). One of the very best combinations of comedy and horror ever made, and one of the best horror movies of the '80. Possibly ever. 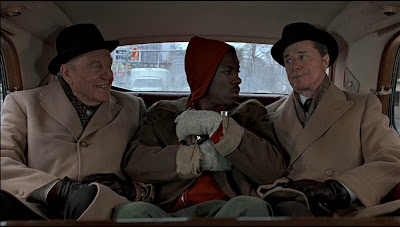 5. Trading Places (1983) - Though it's remembered for being a typical '80s comedy (alongside stuff like Stripes and Caddyshack), Trading Places is evidence that Landis' heart clearly lies with the post-Depression-era screwball comedies of the 1930s and '40s. The director's usual fish-out-of-water themes are built right into the premise of the movie, which finds a snooty businessman (Dan Aykroyd) and a streetwise con man (Eddie Murphy) swapping stations in life at the whim of two millionaire brothers (Don Ameche and Ralph Bellamy). Aykroyd overdoes it, but Murphy, Ameche and Bellamy are all super great. The movie is updated a little for '80s sensibilities (hence Jamie Lee Curtis' famous nude scene), but Sturges and Lubitsch would be proud.

6. Into the Night (1985) - The same year he made the much more commercially-minded Spies Like Us, Landis made one of his most offbeat and personal movies -- which, not surprisingly, is also one of his least-seen efforts. Jeff Goldblum plays an insomniac who gets mixed up with a woman (Michelle Pfeiffer) being chased down by hitmen and assassins. There's an uneasy mix of comedy and violence that speaks to the two sides of the filmmaker, and the displacement themes are more interesting this time because they're explored in the main character's own city -- in the world that exists while everyone else is asleep. This one may appeal only to the most devoted of John Landis fans. 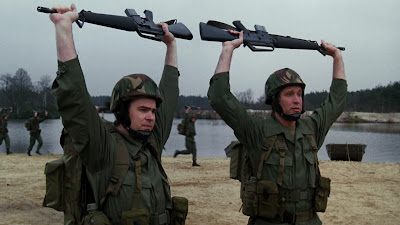 7. Spies Like Us (1985) - Having done his Preston Sturges movie, Landis set out to make his own Hope/Crosby road comedy. Dan Aykroyd (in his fifth collaboration with Landis, if you count Twilight Zone: The Movie) and Chevy Chase are government screw ups sent to the Soviet Union to distract the Russians away from the capable agents doing a job. Like a number of his most successful comedies, Spies Like Us leans heavily on the displacement gags, but Aykroyd and Chase are funny together and Landis' love of the movies to which he's paying tribute is obvious in every frame.

8. Coming to America (1988) -Though Landis' movies have never known for being particularly sweet, that's the best word to describe Coming to America, which teamed him up with Eddie Murphy for the second time. Though the movie became responsible for some of Murphy's bad habits -- namely, burying him in Rick Baker makeup and having him play a bunch of roles -- the result is one of the comedian's best movies, and his only romantic comedy that actually works. Apparently, Landis and Murphy did not get along on the set, suggesting that it would be the last time the two worked together -- until, both needing a hit, they reteamed for Beverly Hills Cop III. If only they could have stayed mad at each other.

9. Oscar (1991) - Landis' most underrated movie is also an even more blatant attempt at doing post-Depression-era screwball comedy than Trading Places. The movie was doomed once Sylvester Stallone was cast in the lead as "Snaps" Provolone, a gangster attempting to go straight (former criminal displaced amidst the "straight" business world), since no one is very interested in him doing comedy (as the box office receipts of Rhinestone and Stop! Or My Mom Will Shoot suggest). It's too bad, too, since Stallone isn't bad. Way better is the incredible cast of character actors that populate ever role no matter how small, including Tim Curry, Chazz Palminteri, Peter Riegert, Harry Shearer, Kurtwood Smith, Eddie Bracken, Martin Ferrero, Yvonne De Carlo, Kirk Douglas and Flash Gordon's Ornella Muti. If you're a fan of Landis and you haven't seen it, you're missing something special. 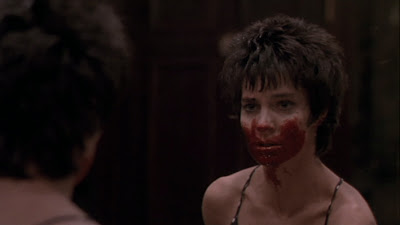 10. Innocent Blood (1992) - The last good Landis movie (not counting his later documentary work) is an attempt to recreate the horror/comedy formula that was so successful in American Werewolf. This one might as well be called A Parisian Vampire in New York, with La Femme Nikita's Anne Parillaud as the displaced French vampire. The movie's masterstroke is pitting her against the mob, which, at the hands of boss Robert Loggia, is gradually becoming more and more undead. The pacing of the movie is off, but all of the "mob" actors (including Loggia, Don Rickles, Kim Coates, Chazz Palminteri and David Proval) appear to be having a great time. Plus, Landis still knows how to stage a black comedy set piece, as evidenced by Rickles' final scene.

When in Hollywood, visit Universal Studios. Ask for Babs.
Posted by Patrick Bromley at 5:19 AM