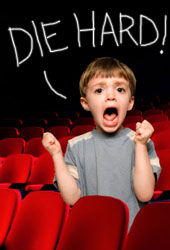 T-minus six days until the F This Movie! screening of Die Hard at AMC South Barrington 30! Buy your tickets today! I'm going to count to three. There will not be a four ...

Our good friend/one-time (hopefully more?) F This Movie! contributor Jason gave me the book this film is based on about 10 years ago. After struggling through the first 90 pages (they're pretty rough), the novel takes off, and, honestly, I had a great time reading it. I also thought -- even back in the early 2000s -- that there's no way they can turn this thing into a movie. It felt like a purely fantastical tale with no basis in physics or animal kingdom logic -- like a parents' bedtime story, full of awesome visuals (I'm picturing that carnivorous island full of trees with teeth right now!) but, ultimately, unfeasible (which is also addressed in the book, if I'm not mistaken). PROVE ME WRONG, ANG LEE! A beautiful trailer, and I think it's smart to use such a vivid palette. So long as it doesn't go full-What Dreams May Come.

It's pretty well established that I'm not this site's resident "Comic Book Guy." That would be Patrick. Or Mike. Or Adam. Or Erich. Or everybody else before me. I only ever bought one Superman comic in my life, and I'm pretty sure the rest of the world did too -- it was 1992's The Death of Superman, and, sadly (but not surprisingly) it did not fund my college education. Kinda weird for a 14 year old to only think about long-term investing, but I did the same thing with baseball cards. Still have a closet full of complete sets from 1990, 1991 and 1992, along with EVERY OTHER BASEBALL CARD COLLECTOR IN THE WORLD. My old Beckett guides are worth more than the cards they purport to track. My point is this: my relationship with Superman is suspect. For example, is Lois & Clark: The New Adventures of Superman canon? Because all I remember about that show was arguing about it with my sister (she had a crush on Dean Cain [WHO DIDN'T]), as it was on at the same time as The Simpsons (I preferred The Simpsons, and you are not surprised). Shifting gears, what do all you nerds out there think about Zack Snyder directing this? Personally, I think it's cool (I genuinely like his previous films), and I'm interested to see what he does with it. Let's hope he doesn't Ga'Hoole it up, though, amIright?

At first, I thought this was James Franco's NYU student film thesis, but then the screen widened out, my eyes were flooded with COLOR and I saw the "From the Director of the Spider-Man trilogy" title card. Suffice it to say (is a terrible expression), I was all, "Ya burnt, Doug!" Sam Raimi is great (jazz hands aside), but I feel funny about this movie. Like, really? Really, really? Really. Unnecessary CGI nightmare fuel, to be sure.

This movie looks totally fine. Sure. Great. Whatever. And, yes, while it's totally appropriate that I feature the trailer in this column (aptly titled something-something TRAILERZ), I have ulterior reasons for its inclusion. You see, the film includes original music from the band, Say Hi, and they're great! Check out their Tumblr here, or better yet, listen to their tunes on SoundCloud. So, right ... see Free Samples (starring indie darling Jess Weixler and Mr. Zuckerberg himself, Jesse Eisenberg) for the riveting story, but stay for the MUSIC. End of plug.
Posted by Patrick Bromley at 6:47 AM