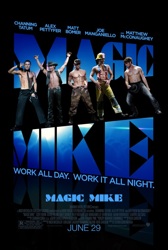 The aspect of the new Channing Tatum stripper movie Magic Mike that's being ignored in all the marketing and hype is that it's a really good movie.

Warner Bros. really shouldn't be blamed, as they've done an excellent job marketing the movie: they're selling a big, fun, naked guy party, and I'm actually glad that's the route they've chosen to take. It's getting a bunch of people (mostly women) out to the theater thinking that they're getting that, then tricking them into seeing a Steven Soderbergh movie.

Make no mistake about it: Magic Mike is very much a modern-era Steven Soderbergh movie. It features his usual overlapping editing rhythms. It's impeccably photographed, as always by Soderbergh himself (under the name Peter Andrews). It has, at times, the documentary-like feel of Bubble; it has the same concerns with what we're willing to sell for money as The Girlfriend Experience; it has characters who construct identities by lying to themselves like Matt Damon in The Informant!. Though there are plenty of stripping sequences to keep the ladies who line up to see the movie satiated, the movie is much more thoughtful than the big naked party it pretends to be. 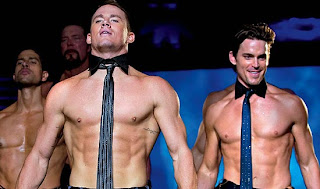 Based on a "story" by Channing Tatum (who worked as a male dancer for 18 months before becoming a famous actor; the screenplay by Reid Carolin isn't based on Tatum's experiences so much as by the kinds of things he saw going on during that time), the movie follows Mike, male stripper by night and all-purpose entrepreneur by day: he runs his own roofing business, club promotion company, car detailing business -- anything that deals in cash. Yes, Mike is selling himself, but only as a means to an end; his real dream is to start his own custom furniture business.

Mike meets an aimless but good looking 19-year old named Adam (Alex Pettyfer), who he quickly gets in the door at Xquisite; before long, Adam is dubbed "The Kid" and thrown up on stage, more than happy to indulge in the life of sex, drugs and cash afforded to him as a dancer. Mike also takes an interest in Brooke (Cody Horn), Adam's no-nonsense sister, who sees right through his bullshit but likes him anyway. As The Kid is falls further under the spell of Xquisite and its owner, former male dancer and possible sleazy con man Dallas (Matthew McConaughey, doing either an excellent job of either sending up his own image or just being himself), Mike slowly realizes that his lifestyle is less a means to an end than a definition of who he is.

Did anyone else see this Channing Tatum thing coming? I know he's had a following for years, mostly made up of teenage girls who think he's cute and like him in his Step Up and Nicholas Sparks movies. He's never done much for me, however; his best performances (like in A Guide to Recognizing Your Saints and Stop-Loss) always seemed like a case of good casting over good acting. But between his work in Haywire, a brilliant (that's right) comic turn in 21 Jump Street and now Magic Mike, Tatum is pretty much owning 2012. Here he gets to be funny and charming, smart but misguided. Fake. Sincere. Shallow. Wounded. He gets to take off his shirt. He gets to dance a lot, at which he is great. This is his first real movie star turn, and it actually suits him well. That doesn't mean that he's going to start playing roles way outside of his comfort zone, but that's true of a lot of movie stars. We go to see them do the things that they do best. That's what Magic Mike does for Channing Tatum. 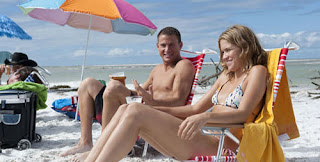 His performance feels natural, and there is an unforced ease to the acting that extends across the entire cast. Cody Horn, as the film's possible love interest, is probably going to be accused of being stiff and cold, but it's part of the movie's overall aesthetic -- the characters feel less like actors playing parts than real people being followed around by cameras. Part of this has to do with Soderbergh's documentarian approach; part of it is his penchant for non-traditional casting. Here he uses former wrestler Kevin Nash, stand-up comic Gabriel Iglesias and fanboy fantasy girl Olivia Munn, all to good effect (Munn's casting, in particular, is very clever in terms of what she's asked to do in the movie -- it's all about presenting a fantasy and then subverting it). Even Alex Pettyfer, who I had previously written off as being the worst, is totally effective in his role, and his casting is another bit of meta-commentary on his own celebrity: he's the pretty face shoved in front of an audience and immediately told he's a star, whether or not he's done anything to earn it. If Pettyfer is smarter about the roles he chooses, Magic Mike suggests his career might actually survive the one-two punch of I Am Number Four and Beastly.

Magic Mike is not a great movie -- it doesn't break any molds, and there isn't much in the movie that we don't see coming -- but it is a very good movie, and further proof that Soderbergh can elevate almost any material he touches. This summer has been filled with pleasant surprises: movies that are better than we expect, or that are different or interesting and carve out space for themselves. Magic Mike continues that trend, and keeps Soderbergh's amazing streak of navigating indie-style movies inside the studio system alive. It's too bad, then, that half the audience is going to see it for the wrong reasons and be disappointed, while the other half is going avoid it for those same reasons and miss out on something special. Serves them right, I guess.
Posted by Patrick Bromley at 12:31 AM