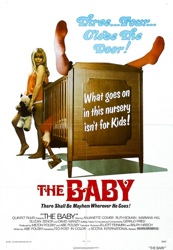 I’ll admit it. No one asked me to watch this movie. I did this to myself. If that breaks some sacred trust between this site and its readers, I apologize. I just really needed to get it off my chest.

It all started on Netflix. I was looking for something new. Something I’d never seen before, perhaps a secret gem I could recommend for Netflix This Movie!. First stop, the 1989 Bob Balaban horror-comedy Parents, about a boy in the ‘50s who discovers his parents are cannibals. It’s a solid movie that plays with childhood fears and audience expectations -- until the end, when it becomes a boring, by-the-book thriller. Good, but not worth a recommendation (or its own write-up). It did, however, inspire Netflix’s soulless algorithm to suggest something called The Baby. Even as a thumbnail image, it looked trashy, reeking of sleazy ‘70s exploitation. There were so many red flags. Like a poisoned frog or a deadly wildflower it tried to warn me off. But like some stupid jungle predator headed for extinction, I bit anyway. As they say, “curiosity something-something the cat.” Rewarded? Replused? Doesn’t matter.

Let me tell you about The Baby. 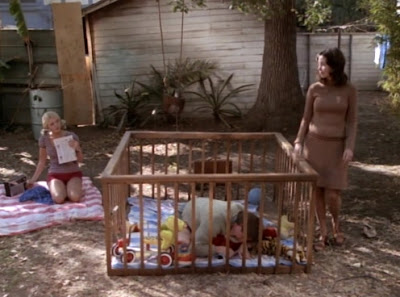 Written by Abe Polsky and directed by Ted Post (oddly enough, the same year he directed Clint Eastwood in Magnum Force) this 1973 flick is about Ann Gentry (Anjanette Comer), a social worker who becomes obsessed with the case of “Baby” (David Mooney), a mentally challenged adult male who wears diapers, sleeps in a crib, can’t walk or talk, and is cared for by his overprotective mother (Ruth Roman) and masochistic older sisters Germaine (Marianna Hill) and Alba (Susanne Zenor). Even though the opening credit montage shows photos of Baby, the reveal doesn’t take away from the moment we actually meet the creepy man-child. Like Henry, Portrait of a Serial Killer, this film is unsettling because it plays things straight for a while. Ann seems to genuinely want to help Baby be the man his abusive family won’t let him become, encouraging him to try to talk and to stand, like a cross between Miracle Worker and What Ever Happened to Baby Jane?.

But come on. This is a movie about a man who cries and sleeps in an oversized crib. There’s nothing normal here, and the play for pathos makes The Baby all the more exploitative. Don’t make the mistake of caring about these characters, because this film will only use that to perform a kind of jujutsu mindfreak once the movie turns on the crazy spigot and rips off the knob. This movie is all kinds of icky. Some of it is easy to pinpoint. A babysitter gets turned on when Baby mistakes her for a milk machine. His sister, dressed in see-through lingerie, visits his crib in the night (the film makes mention that all of Mama Wadsworth’s children are by different fathers, but it’s still a scene only Daniel Tosh could love). Other sequences are disturbing for less obvious reasons. Partway through the movie, Ann attends Baby’s birthday party -- a far out ‘70s freakfest overflowing with booze, drugs, and hippies on the make. I don’t remember if any of my early birthday parties had themes, but I’m sure none of them was “Key Party.” 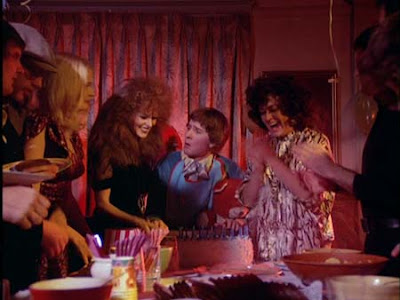 After the shindig, The Baby moves into full-on horror mode. People get tied up, kidnapped, and slaughtered one by one. As the body count increases, it becomes clear that The Baby isn’t going to end well. In fact, the ending might be the most disturbing part of the whole movie. I won’t spoil it, but if you’ve seen this movie let’s have a properly SPOILER-tagged discussion about it in the comments below. Crying is encouraged.

Although The Baby never tries to be more than exploitation, it’s not lazy about it either. The performances are over the top in the right way. No one is in danger of tripping over an Academy Award, but they all sell the sleaze. Ruth Roman, in particular, is great as the mother. Roman -- who starred in Alfred Hitchcock’s Strangers on a Train back in 1951 -- is unhinged and charismatic, devoted to and possessive of a son she showers with affection when she’s not locking him in the closet. It’s never clear whether Baby is retarded, or the product of extreme negative reinforcement. They never say because it doesn’t matter. As Baby, David Mooney has clearly studied the part. Director Ted Post may have replaced his fake crying for real baby noises (it’s as terrifying as it sounds), his mannerisms are so dead-on, I don’t know whether to rock him to sleep or run away screaming. The movie would be even harder to watch if we didn’t care about Baby’s well-being. By the time it wraps, the fact that we feel anything for Baby is why the final scene hits as hard as it does. There’s a quality to ‘70s horror that makes these movies creepy by default. Perhaps it’s the lack of proper opening and closing credits, maybe it’s the fact that everything looks grimy, maybe it’s the clothes and hairstyles. I don’t care if it’s a film classic or the lowest of the low. If it was made in the ‘70s, it’s probably going to make me queasy. And yet, I keep coming back for more. I still can’t bring myself to give The Baby a star rating, no matter how many times Netflix asks me. Part of me wants to block out the entire experience like an embarrassing sex dream. But I have to tell you about this movie, because, God help me, I want you to watch it. To share in my pain, yes, but also because I have never seen anything like it and that makes it worth seeing. Just don’t expect to watch it ironically. The Baby is hipster-proof. It’s terrible, but in no way hilarious. In fact, since watching it, I haven’t laughed. Or slept. Enjoy!

Here's The Baby's theatrical trailer (in old-timey fashion, it gives away a TON):