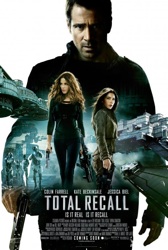 It seems like a lot of the discussion over Len Wiseman's new remake of the Arnold Schwarzenegger sci-fi classic Total Recall boils down to "Is it better than the original?" That's the wrong question. How it compares to the original is irrelevant. The question we should be asking is "Is it a good movie?"

The answer is no. Not really.

It's not a great idea on paper: Paul Verhoeven's crazy, violent 1990 movie gets a slick, shiny, expensive-looking but soulless makeover courtesy of the guy responsible for the Underworld series. Are any of us all that surprised that it doesn't work? Len Wiseman is a director with a lot of confidence but no personality. His movies are slick and professional looking, but his only real stylistic flourish is that he casts his wife over and over again.

He casts her again here as Lori, wife of Doug Quaid, a blue-collar assembly line worker living in the overcrowded Colony circa 2084. He dreams of a more exciting life in which he's a spy (we know he wants to be a spy because he reads James Bond paperbacks), fighting bad guys alongside Jessica Biel. Against his wife's wishes, Doug visits Rekall, a company that chemically implants any memory you want that's as real as if you actually lived it. Just as they're getting ready to implant Doug with memories of a spy adventure, the Rekall offices are swarmed with cops who try and arrest him; it's at that moment that some sort of reflex kicks in, and Doug is suddenly able to take out a dozen guys without breaking a sweat. It turns out that maybe Doug's spy dreams aren't actually dreams -- they might be memories, and he's actually a secret agent named Carl Hauser, working either for Chancellor Cohaagen (Bryan Cranston, slumming) or for the Resistance, alongside a very real Jessica Biel. But which is it? And is any of this really happening? Or is he still strapped into the chair at Rekall, dreaming up a fantasy?

If you've seen Verhoeven's movie, all of this sounds very familiar. Too familiar, in fact. Probably the biggest change from the 1990 version is the removal of Mars, which sounds like a much bigger deal than it ends up being (I know, because I was incredulous when it was first announced. How could they do Total Recall without Mars?). In its place is the neat idea that there are only two livable continents left on Earth: The Colony, where the 99% live, and the United Federation of Britain, which is on the other side of the world and where the 1% live and some of the 99% travel to work. How do they get there? Via "The Fall," a massive underground elevator that travels through the planet's core. It's an overly-complicated premise, done no favors by the fact that it's all explained VIA TEXT at the opening of the film. That's just never good. And while the class differences could make for some interesting ideas, they're explored no further than that bit of summary.

Wiseman's approach to remaking Total Recall is to borrow from every science fiction movie of the last 30 years, beginning (obviously) with Paul Verhoeven's original from 1990, the story beats of which this version follows very, very closely. The production design shows too many people, too many buildings, too much rain; the landscape itself feels totally oppressive. So it's like Blade Runner, only shittier. There is a climactic fight scene that takes place in zero gravity, so it's like Inception, only shitter. There is an army of automated robots ready to wage war on the city, so it's like I, Robot, only...well, it's like I, Robot. The result is a kind of Frankenstein's monster -- stitched together from other, better living parts, missing a soul. For all its problems -- and it's a tacky, sometimes sleazy, often ridiculous movie -- the Paul Verhoeven version of Total Recall had a ton of personality. That's been bled away by Wiseman, both by nature of the fact that the movie is just a mash-up of other science fiction movies and because Wiseman is incapable of directing a movie with a personality. It's just not in him. Like The Amazing Spider-Man from earlier this summer, this new Total Recall makes itself more palatable to all audiences by removing most of what was once interesting about it.

Most of the "Is this real or isn't it?" stuff from the Verhoeven movie has been done away with (though lately the original has been getting credit for dealing with this more than it actually does), and in its place the remake has been turned into The Bourne Identity: a guy slowly realizes he has a particular set of lethal skills that he doesn't remember acquiring and goes about discovering his past only to learn he's the violent tool of a larger bureaucracy. Once Quaid realizes he's not who he thinks he is -- right around the time he visits Rekall -- the movie just turns into one chase scene after another. Quaid goes somewhere; Kate Beckinsale (who is actually a cop who has been pretending to be his wife to keep him under watch) and her army of robot cops show up and try to kill him. He gets away. Repeat. There is no story -- at least, no story that hasn't been lifted directly from the Paul Verhoeven version (for some reason, the filmmakers decided to just remake the 1990 movie instead of returning to Philip K. Dick's original short story, "We Can Remember It For You Wholesale" and working from there). There is just a series of action beats. Anything resembling a plot is dependent on our familiarity with the Schwarzenegger movie. The movie is happy to take shortcuts with the understanding that, yes, we've seen all this before.

That's the biggest thing I don't get about the Total Recall remake: it insists on bringing up the original movie over and over again. If I'm Len Wiseman, I'm going out of my way to make sure this "new" version stands on its own -- I want the audience thinking about the first movie as little as possible. Instead, we get an endless series of winks and nudges to the Verhoeven movie: Quaid says "I want to go to Mars," because heh heh get it? The three-breasted prostitute shows up, even though it makes no sense why a woman (who is no longer a mutant affected by the atmosphere of Mars) has three breasts. Quaid quotes the "If I'm not me, then who the hell am I?" line verbatim. A redheaded woman shows up and says "Two weeks" as Quaid is trying to pass himself off through customs in disguise. New Total Recall, if your goal is to be a new take on Total Recall, then JUST BE THAT. Stop calling attention to the fact that you are just an imitation of a previous movie -- and a humorless, inferior one at that. 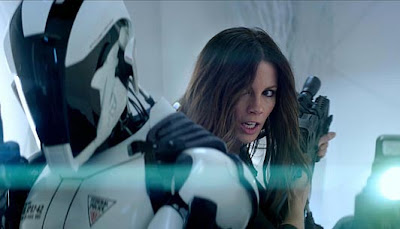 There are things that the movie does well, though. Even though is borrows heavily from Blade Runner (which almost every sci-fi movie of the last 30 years has done), it does a good job of setting up a reality in which Quaid would actually want to go to Rekall. His life basically sucks. It sucks to live in The Colony. His apartment is tiny. He works on an assembly line building the robot police force and gets passed over for a promotion. Rekall offers some escapism, and the motivation that the remake explores is actually superior to the original, which amounted to Arnold Schwarzenegger daydreaming a little. There's some neat future stuff, like little cameras that can be shot all over a room and then viewed on a kind of backpack screen. There are phones that people have implanted in their hands (though really this just leads to a "take the phone out of your hand" scene that stands in for the original movie's "take the tracker out of your nose" sequence). Wiseman knows how to choreograph and shoot an action set piece, and at least tries to do some of them in a way we haven't seen before. Unfortunately, it means they tend to be overly busy, but at least the movie is trying. It's too bad that none of the actors have a character to play; aside from their names and what they look like, I couldn't tell you anything about these people. The only person who comes close to creating a character is Kate Beckinsale (I know; I'm as surprised as you), but only because she has at least been given a purpose, even if it doesn't make much sense. Still, she's pretty much the living embodiment of the Total Recall remake: looks great, but nothing going on underneath.

Over on Ain't It Cool, the critic writing under the name "Nordling" begins his review of the new Total Recall by saying that he's not diametrically opposed to remakes, and that he is, in fact, looking forward to the upcoming RoboCop remake by Jose Padilha. That's all well and good -- even if I don't share his feelings about RoboCop -- but it puts the rest of us in a bad position, as though I now have to clarify that, no, my problem with Total Recall isn't that it's a remake; my problem with Total Recall is that it doesn't really work as a movie.

But let's talk about what Nordling says for a second. I'm not opposed to remakes, either. At least, not solely on principal. I don't think many people are, because there are just too many great ones to discount them as a genre outright. There are way, way more terrible ones, of course, but that's not really the problem either. The problem is that we are hurtling toward a closed loop of moviemaking, in which we've already gotten all of the movies we're going to get. From here on out, it's just sequels, remakes and reboots of existing properties. In fact, I can think of only a few "original" major studio releases this summer: Snow White and the Huntsman and Magic Mike*. Both had sequels announced as soon as they made money in their opening weekends, even though neither has any more story to tell. All that matters is a recognizable name. I'm not opposed to remakes. I'm just opposed to only remakes.

So, yes, Total Recall has a recognizable name, but it fails to reinvent the material in any significant way. There are cosmetic changes and geographical changes, but it's not telling a new story. It's not even telling the same story in a new way, really. It's another in a long line of remakes that know the words and not the music, taking away all the stuff that once made the movie weird and interesting. All that's left is a Len Wiseman movie.

*Yes, I know. Brave and The Watch and Ted and Savages, but I feel like my point is made by the fact that I'm only six movies deep and I'm having to include Savages -- which, if we're being fair, is based on a book.
Posted by Patrick Bromley at 11:11 PM