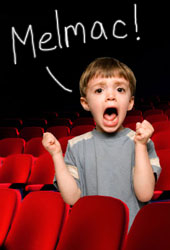 Based on the huge(?) success(?) of The Smurfs, ALF is now going to be made into a movie. What's next? A feature-length Poochinski film?

Forget the fact that Kathryn Bigelow directed The Hurt Locker (which is a great movie, but just FORGET ABOUT IT ALREADY). 21 years ago, Kathryn Bigelow directed Point Break. Point Break is the best! Yay Point Break! Of course, Point Break has nothing to do with Zero Dark Thirty, which is a gritty docudrama chronicling the hunt for Osama bin Laden after the 9/11 terrorist attacks. I'm a sucker for war/military movies, and the feel of this trailer works for me (Google Earth footage excluded). Could the film use a little Johnny Utah? WHO AM I TO SAY? "Bin Laden! This is your wakeup call! I AM AN F ... B ... I AGENT!"

This was made by a trailer-making robot, I'm sure of it. The music, the pacing, the revealing plot points -- everything. If I see one more preview that features "You Can't Hurry Love" or "Signed, Sealed, Delivered I'm Yours" or "What I Like About You," I'm gonna VURP all over my BRRRAP. Good to see Topher Grace getting some work, though. QUESTION: am I being sarcastic?

Warning: this is a red band trailer, so headphones UP! Between this, Attack the Block and Shaun of the Dead, the Brits are really cleaning up with the horror-comedies (horroredies? Comedorrors?) these days. And yes, while some CYNICS out there might reply with something SARCASTIC, like "They should go to the Winchester, have a nice cold pint, and wait for all of this to blow over" (thanks, YouTube comments) I, for one, am happy to have it! I mean, how weird is it that some complain (or, at least, roll their snarky eyes) when all this film's trying to do is ENTERTAIN YOUR PANTS OFF. Welcome to the fold, Cockneys vs. Zombies! I look forward watching you on Blu-ray with the subtitles on!

Hubba-hubba (because Zac Efron in his underwears). Seriously, though, this looks pretty ... great? Or at least gritty (twice this week!) and "interesting" (the easiest/lamest compliment Doug hands out to trailerz). Directed by Lee Daniels (Precious) and costarring Matthew McConaughey, Nicole Kidman and John Cusack (and Macy Gray, fresh from her appearance in Spider-Man), The Paperboy also features a much talked-about scene in which Nicole Kidman pee-pees on Zac Efron after he gets stung by a jellyfish (#jealous). Quick sidenote -- for as much as I lurve Mr. Efron, I still can't spell his name. Does it have a K, a CK, CH, two Fs ... ? UGH.

Patrick shared this trailer with me via email yesterday. His message simply said, "My brain can't make sense of this. But Rena Riffel." Not much I can add to that, except for an extra "t" on "But." What do you think, F-Heads? #dodougsjobforhim
Posted by Patrick Bromley at 7:16 AM