It Came from the '80s: Dragonslayer 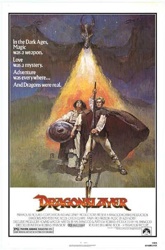 Movies have been around for over 100 years. In that time, there have been surprisingly few dragon movies made. There have been even fewer good ones. 1981's Dragonslayer is the best of them.

In a decade that would eventually become overcrowded with fantasy, Dragonslayer still stands out as something special. A co-production between Paramount and Walt Disney, the movie combines the kind of '70s and '80s Disney fantasy with much more adult sensibilities. It's another of many genre movies from the '80s that's essentially appropriate for kids, but which does not talk down to them or shy away from scaring them. That's the reason that these movies have lasted in the collective conscious of us '80s kids -- they're not just disposable computer-drawn cartoons about wacky animals that talk and fart. We responded to them in ways we probably didn't understand at the time. They captured our imaginations. They shook us up. Dragonslayer does those things.

Peter MacNicol ("Why am I drippings with goo?") plays Galen, apprentice to the sorcerer Ulrich (Ralph Richardson). The sorcerer is is sought out by a young man named Valerian, who is looking for help in destroying the dragon that is killing the people of Urland. It seems that twice a year, the king of Urland holds a lottery to determine the name of a virgin girl who will be sacrificed to the dragon. Ulrich agrees to take the job, but no sooner have he and Galen begun their journey than the elder sorcerer is killed by Tyrian, the king's asshole. Galen continues the quest with Valerian, who is actually revealed to be a woman (played by Caitlin Clarke) disguising herself as a man to avoid being entered into the lottery. Armed with only some simple magic and the ashes of Ulrich, Galen and Valerian journey to defeat the dragon and free the kingdom of Urland forever.

So let's just say this up front: the movie's dragon, called Vermithrax Pejorative, is the best dragon to ever appear in a live-action film (the animated category is a toss up between How to Train Your Dragon and Sleeping Beauty). Better than Dragonheart ("Entrapment is what cops do to dragons!" - Sean Connery). Better than Reign of Fire. Better than D-Wars, because no shit. Vermithrax works because he is angry and he is deadly -- and because he is a practical effect, not a weightless CGI creation. Writer/director Matthew Robbins wisely uses the dragon sparingly for nearly two-thirds of the movie's running time; taking a page from Jaws, the beast is glimpsed only in pieces. When it is finally revealed, it's an awesome practical effect. The puppeteering, especially on the head as it moves, makes the dragon feel totally real and believable. No attempt is made to explain its actions. It is not misunderstood. It is not protecting any young (well, there are young, but no motivations are stated explicitly the way they would be nowadays). It's just a big, scary monster. 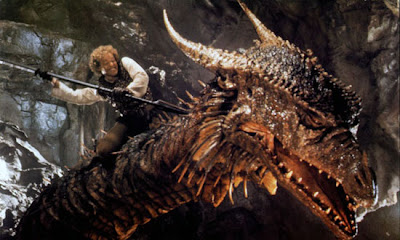 I still can't decide if Peter MacNicol is totally miscast as Galen, the movie's hero, or if his casting is clever and unconventional. He's not meant to be the hero; he's the sorcerer's apprentice, promoted to leader status mostly be default. The flaws in the character of Galen aren't really a result of MacNicol's performance -- he's fine -- but in a lack of an effective dramatic structure. Galen, for the most part, is unchanging throughout the movie: he makes a decision to slay the dragon, then goes about trying to make that happen. I'm not suggesting that every hero must be a reluctant one, or even that Dragonslayer should have stuck to Joseph Campbell's monomyth. I am saying that either choice would have helped, though, because the movie isn't sure what to do for most of its middle act. There should be a quest. Obstacles along the way. They don't have to be of a fantastic nature -- I can appreciate that the movie wanted to limit those elements to the use of magic and the dragon -- but without any kind of series of steps, the movie just kind of meanders. Galen thinks he killed the dragon, but he didn't. Then he tries to kill the dragon, but he doesn't. Then he wants to kill the dragon, but finds out he can't. Too much time is devoted to the reveal that Valerian is actually a girl (though I do like this particular aspect of the movie, as it comments both on gender roles of the "period" and in all of fantasy fiction, and also because Caitlin Clarke might be one of my '80s movie girlfriends), or to the conflict between Galen and Tyrian.

Like anything that's deeply rooted in nostalgia, a lot of the movies I talk about on It Came from the '80s exist as half-formed memories for a lot of us. They're things we saw on cable 25 years ago that can only be recalled like dreams -- flashes of a scene or an image that we can conjure up without necessarily understanding its context or placement in the larger story. And because so many of the PG (and, later, PG-13)-rated movies of the '80s -- several of which were essentially aimed at children -- feature at least one scene of terrifying imagery or shocking violence, THOSE ARE THE THINGS I REMEMBER. Even when I can't recall anything else about a movie, there's a single sequence or a single image that's burned into my brain (leaving me, yes, SCARRED FOR LIFE) and stands out after the rest has faded away. Though I hadn't seen Poltergeist in 20 years, I couldn't shake the image of the guy pulling the skin off his face in the bathroom mirror. There are others: the little podling's face sinking in as he's drained of his essence in The Dark Crystal. Klytus's eyes bulging out after he falls on the spikes in Flash Gordon. Toht's face melting off in Raiders of the Lost Ark.

In Dragonslayer, it's the foot scene.

(SPOILERS  for Dragonslayer coming up)

Princess Elspeth has agreed to be the first member of royalty to be sacrificed to the dragon. Though Galen attempts to rescue her, seeing her death as a futile and pointless gesture, she makes a choice to enter into the dragon's den, where she is promptly attacked (off screen) by several baby dragons. Galen enters the cave to find her lifeless body on the ground...only her ankle is being graphically CHEWED UPON by baby dragons. It's gross. Worse, there is a moment right before Galen kills the babies where one of the little dragons BITES HER ENTIRE FOOT OFF on camera. This is in a PG movie. Produced by Disney. For many years, I couldn't remember a single thing about Dragonslayer, but that image has never left my head. It was filed away in my brain only as "that movie where the girl's foot gets eaten."

But the scene exists as more than just a way of grossing us out -- it gets as the very subtext of the movie. Dragonslayer is a movie about belief, and it doesn't have a lot of positive things to say on the subject. Yes, it asks the audience to believe in dragons and magic. But it also sends Galen on a journey with the belief that he is a sorcerer capable of performing magic, only to pull the rug out from under him in the final minutes and acknowledges that he's basically just a pawn. Brother Jacopus (a pre-Palpatine Ian McDiarmid), village priest and Man of Faith, attempts to stave off Vermithrax with prayer; he is promptly (and graphically) set on fire for his trouble. And then there's Princess Elspeth, who places her faith in the ritual sacrifice her kingdom has offered for years. When she learns that her father, the king, has left her name out of the lottery from which the names of virgins to sacrifice are drawn (yes, this is another movie in which the rich and powerful survive on the backs of those less fortunate, who are sent to die so that those in charge may remain so), she insists that she be included and made eligible. When she is given the opportunity by Galen to escape with her life, she still chooses to enter the cave of her own free will. And she is killed for it. And her foot is eaten. And Vermithrax is not appeased, and still attacks. That in which Elspeth placed her faith, like so many of the other characters in the movie, amounts to nothing. BLEAK.

There are so many elements of Dragonslayer that feel so much more mature and sophisticated than any comparable movie would be in 2012, from the level of violence and terror to the religious and political subtext to the way that Princess Elspeth is allowed to die even though she sees the error of her kingdom's ways and attempts to do the right thing. Any contemporary movie would repay this conscience by allowing her to live, because the possibility of such things is what audiences want to believe. The movie subverts the tropes of traditional heroism, too, by undercutting Galen and rendering him, basically, impotent during the movie's climax. That probably wouldn't happen in a modern movie, either, because no movie star would agree to play a character like that.

I love the look of the movie, too, which is all grey and dirty and lived in. Director Matthew Robbins (whose next movie would be The Legend of Billie Jean) doesn't shoot Dragonslayer like an epic fantasy, instead opting to emphasize the "reality" of the locations and the characters. It isn't until the final few minutes that the movie really cuts loose with the magic and special effects, and, at that point, it's worth the wait. There is a sense that we have been building to this moment, and the delayed gratification makes the last showdown that much more satisfying. Also a little anticlimactic.


There were plenty of terrible genre movies in the '80s. I'm sure that right now, I'm still riding a high and excited about the potential to champion the movies that people may have forgotten but which are worth rediscovering. That makes it easy to focus on a movie like Dragonslayer, which is undoubtedly flawed but still totally special. If you haven't seen it already, track it down. It's worth seeing just for that badass dragon.

Posted by Patrick Bromley at 8:11 AM