It Came from the '80s: The Boy Who Could Fly 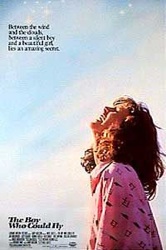 You will believe a boy can float in front of a blue screen.

The '80s were a special time for movies. Not a great time, necessarily, though a lot of great movies were made in the decade, but a special time. It's a theme that will come up again and again in this column -- hell, it's the whole reason this column exists. Science fiction and fantasy were so prevalent during the '80s that they began to bleed into non-genre movies, too. Take The Boy Who Could Fly from 1986: it is, for the most part, a straightforward drama about grief and loss that suddenly turns into a fantasy film about two-thirds of the way through it. It's a movie that could only have existed in the '80s.

The Boy Who Could Fly will always hold a special place in my heart, as it was one of the few totally pleasant surprises of my early movie-going experiences (joining Romancing the Stone and The Princess Bride on the short list of movies I didn't want to see but ended up loving). I was nine years old when I saw it, and only because it was playing for free at the theater near my house as part of a special fire department open house or something: you went to the theater early on a Saturday morning, saw a fire truck parked outside, got some fire safety coloring books and then they showed The Boy Who Could Fly (how that movie was decided upon, I will never know). I knew nothing about the movie. The only recognizable star in it for me at that time was Mindy Cohn from The Facts of Life (for real). Based on the title, I had no interest in seeing it. But it was free, and it was PG, and I wasn't going to turn down a morning in a movie theater. By the time the end credits rolled, I had been completely won over -- the movie was willing to go to a place that, even at nine years old, I didn't expect it would go. I expected the title to be a metaphor or something, and when SPOILERS the movie instead made good on its promise, I was quietly thrilled. Here was a movie set in the real world that blended in the fantastic in a way that lacked any cynicism. I was young, but I picked up on that sincerity. 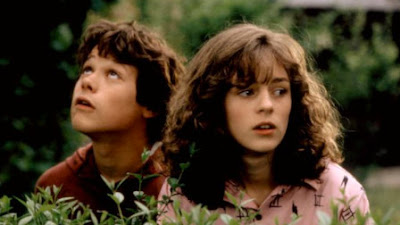 The movie stars Lucy Deakins (another of my '80s movie girlfriends) as Millie, who has just moved with her mother (Bonnie Bedilia) and younger brother, Louis (Fred Savage), to a small suburban town following the death of her father. Grieving and friendless, Millie takes an immediate interest in Eric (Jay Underwood), a mute (possibly autistic) boy who lives next door with his drunk uncle (druncle) Hugo, played by Fred "Sometimes dead is better" Gwynne. Eric's parents were killed in a plane crash, and at the moment of their death, he tried to become an airplane (yes, I know), leading him to believe that he can fly and spend nights standing out on his roof looking up into the sky, seemingly preparing for takeoff. Because he takes a liking to Millie, her teacher asks that she look out for him. As they grow closer and Millie brings Eric out of his shell, she begins to wonder whether or not his daydream is just that, or if there's some truth to it. With Eric in danger of being hospitalized and becoming a ward of the state, the two gradually fall in love and the truth about Eric's abilities is revealed.

Writer/director Nick Castle's previous movie was 1984's The Last Starfighter, another special genre movie for which my affection has already been covered. There's a little nod to that movie here, too, as Louis is seen playing Starfighter in one scene. An even geekier moment comes during the sleepover scene with Millie and Mindy Cohn, as the pair watch a music video by The Coup De Villes, the band made up of Castle, John Carpenter and Tommy Lee Wallace (who all worked on the original Halloween together, and who are best known for performing the theme song to Big Trouble in Little China). They're nice little references to his earlier work, but almost feel out of place in a movie as gentle and sincere as The Boy Who Could Fly. In some ways, this is a departure from Starfighter; there's much less a sense of pulpy fun, less an emphasis on special effects. At the same time, it's easy to see that both movies are made by the same guy -- for a genre director (as he was during the '80s), Castle concerns himself primarily with his characters. He's willing to take the dreams and relationships of young people seriously. To listen to them. That kind of thing was the specialty of John Hughes in the '80s, but rarely made its way into fantasy or sci-fi. It's what makes Castle's movies special. It's also what makes it particularly depressing that he spent the '90s directing terrible comedies like Major Payne and Mr. Wrong. Not that it's entirely his fault, though; the '80s had ended and, with them, the kind of genre stuff that was so popular during the decade. There just wasn't any place for Nick Castle anymore.

Seen today, The Boy Who Could Fly is not without significant problems. Its biggest offense is its perpetuation of the magically handicapped (yes, I know the word is no longer PC, but "magically special needs" doesn't work as a phrase). I'm not sure it's ever quite articulated that Eric is autistic, but that's exactly what we would call it today. He's movie-autistic, of course -- not full Rain Man, but not really resembling any of the young autistic people I've known and worked with before. The idea of giving him some special gift somewhat insulting, too, as though his inability to communicate has to be substituted with magical powers or that he doesn't have enough to offer on his own without his "gift." I'm able to overlook it because Wallace is so patient and open with the two main characters, but it is a little icky when you start to take it apart. 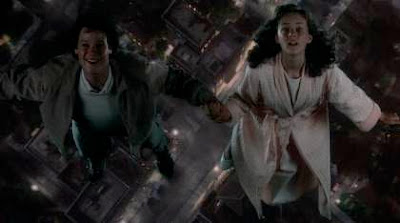 The acting in the movie is uneven, too. Bonnie Bedelia, still two years away from changing her name to Holly Gennaro, overplays things, as does (much as it pains me to say) Fred Gwynne. They both seem aware of the fact that they're acting in a "kids'" movie and pitch their performances accordingly, but because the other actors just play to the reality of their situation, the styles don't match. Lucy Deakins and Jay Underwood get by on the strength of their sincerity -- they act like they believe the story they're in, which is crucial to selling fantasy. Underwood, in particular, has total '80s face (which I can't explain, but it's the face shared by young actors like River Phoenix and Jason Presson), but really comes through in his final wet-eyed moments. Fred Savage deserves a little slack, being that he was only 10 and this was his first movie. My problem with his character is that he's stuck in a B-story more worthy of a sitcom episode than a feature film: his character wants to ride his big wheel around the block, and some bullies keep trying to stop him. That's it. Castle eventually attempts to tie the threads together, weaving in an injured dog and Louis's own fears and regrets about his father's death (it's gradually revealed that he killed himself, which is dark stuff for a kids' movie), but in the very next scene he's spraying pee out of a water pistol. What I'm saying is that The Boy Who Could Fly is not perfect.

But perfect doesn't necessarily matter when a movie has its heart in the right place, and it can't be denied that's where The Boy Who Could Fly has its heart. Castle is dealing with some heavy issues -- suicide, grief, possible mental illness or disorders -- but presents them through the prism of fantasy to make them more palatable (even subversively so) to young viewers. There is something beautiful about the way the movie doesn't shy away from the sadness of the story. And though the special effects don't hold up, they are at least used sparingly. Ultimately, Eric ceases to be a metaphor and just becomes the literal thing described in the title, which robs the movie of some of its thematic resonance (it boils down to just "If you believe in something, you can do it," and that's a depressing lie), but the sincerity remains intact. It's funny; in a lot of ways, The Boy Who Could Fly is a precursor to Safety Not Guaranteed, still one of my favorites of this year, and a movie about choosing sincerity over irony. Castle's movie came before the age of irony, but the movies share a commonality that makes them special. They embrace the possibility of the impossible.

Posted by Patrick Bromley at 6:20 AM

Email ThisBlogThis!Share to TwitterShare to FacebookShare to Pinterest
Labels: 80s fantasy movies, 80s movies, fred savage, it came from the '80s, lucy deakins, nick castle, the boy who could fly