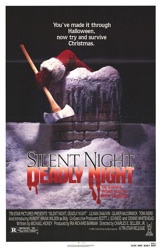 I wish I had a really cool -- maybe even scary -- story regarding the first time I really watched a horror movie.


I could tell you about the time my beautiful and loving grandmother was babysitting for me (I was maybe 6?), and as I cuddled in her lap while she flipped through cable channels (we were one of the first families on the block with cable), I saw a brief shot of a woman on a conveyer belt-type table, strapped down, with a man and a chainsaw awaiting her at the end of the belt. Screaming was heard. My eyes closed quickly, but I never forgot that shot. I don’t think I really knew what the horror genre was all about, and at the point, I was too terrified to care.

Flash-forward to years later – 6th grade, to be precise. My friend Tina had a sleepover, and like most sleepovers in the 1980s, the night ended with movie watching – each girl to her own sleeping bag. This time was different, though. We would be watching TWO scary movies (Rated R! R for “Run home!” R for “Raid the Blockbuster! There have to be other movies!” R for “Raspberry chocolate birthday cake! Yes, I will have another piece!” That last part relates more to my love of sweets than to my fear of chainsaw-wielding men. Let’s move on.) – and not only did I not have any positive experiences with a scary movie, but I knew I was not allowed to watch R-rated movies per my parents.

I should have called home, right? Heck no. We were all in it together. If Tina’s parents rented the movies, it had to be okay? First up, Silent Night, Deadly Night! Next up, I don’t even remember! I think SNDN was enough for the 11 year old set to handle that night. And sooo many images from this movie have creeped me out ever since. 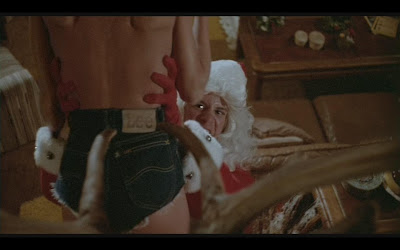 Silent Night, Deadly Night starts with a RAPE and MURDER that involves PARENTS at the hand of SANTA on CHRISTMAS. The kids are then raised in an ORPHANAGE including one terribly mean NUN who emphasizes the need for all things bad to receive proper PUNISHMENT.

We had no idea that the film had been pulled from theaters due to a controversy over its basic premise (Man in Santa Suit Kills). We just knew we were getting away with something, since we mostly had strict parents but somehow were alone with a VHS copy of an R-rated slasher flick.

But eventually, we all did. Every sleepover became a trip to the video store (RIP). Sleepaway Camp, Candyman, The Exorcist (we were all Catholic or Greek Orthodox, so the religious films really worked for us)…

And then I grew up, became more afraid of local news, political scheming, and Nancy Grace stories, and I lost a little of my zest for horror… until Rob Zombie came along with a certain film in 2003. Loyal readers/podcast listeners will learn more about that soon enough.

F This Movie! friends, what is your first horror movie memory? 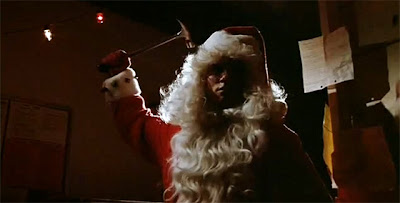 Posted by Patrick Bromley at 6:35 AM