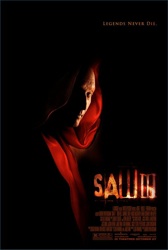 In the world of horror movies, anything that's worth doing is worth doing seven or eight times. Here are some of our favorite franchises in a genre that's full of them.

Mark Ahn: The Alien Franchise - Let's get the obvious things out of the way. I love the instantly iconic signifiers of this franchise, from the totally realized, lived-in world, to the hyper-futuristic technology (Sentry guns! Powerlifters! Lifeform probes! Synths!), to one of the scariest monsters ever created.

The alien combines aspects of every terrifying fear from my childhood. It crawls around like a turbo-charged spider, able to leap from all sorts of angles and high speed. It could away at you with its acid blood, like some more evil mutation of the Blob. In its facehugger form, it has vampiric qualities, sucking the life out of you and then putting its LIVE YOUNG inside of your chest to burst out of you later, basically making you its rape victim. As if the sexual assault metaphor isn't quite overwhelming enough, then it can also stick a phallus out of its mouth. And it was designed by a guy who looks like, well, this.

Man, I LOVE this franchise.

I love that Ripley is an unabashed badass, and is probably the progenitor for so many of those waifs with shotguns that populate Luc Besson movies and the martial arts sweethearts that live in Joss Whedon's imagination. Sigourney Weaver is probably not everyone's vision of beauty (although she's quite foxy in Ghostbusters), but there was nobody hotter kicking alien ass with a stiff upper lip and a tanktop than Ripley. 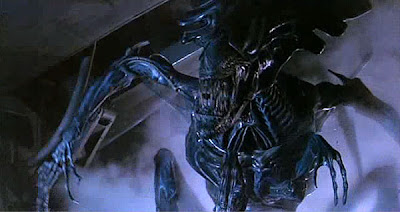 I love that the series has covered the range of genre from horror, to action, to science fiction, to a poor parody of itself, to a campy crossover, and almost all the way back to respectable, myth-building science fiction again (although I'd argue that it was more myth-shattering than myth-building). It can't be classified as just one of those things because it's all of those things, and for somebody who likes his genres in multiple layers, it's heaven-sent.

I love that people still love it and still talk about it, even after the first film came out over 30 years ago. There's been talk of a sequel to Prometheus, and even though I grumbled through the silliness of the Alien vs. Predator stuff and Prometheus too, there's still a jolt and a soft spot that I feel for Alien.

Patrick: So, I'm mad at myself for suggesting this list. Mark already picked what is probably the best and Mike is picking the one that's the most fascinating in its consistency, which doesn't leave me with much. The Evil Dead series is good, but that's kind of a cheat since there are only three movies; same goes for Romero's original Dead trilogy...assuming you're willing to ignore the fact that three more movies followed. And we would ALL like to do that.

My affection for the original Nightmare on Elm Street makes me want to pick that series, even though it, too, became boring in its sameness. But since the same thing could be said of pretty much every franchise (again, except for Alien, because every one of those movies feels different than the others), I guess I'll go with Nightmare because if I have to watch the same characters do the same things over again, at least there's a sense of invention in the series that's missing in standard slasher stuff like Halloween and Friday the 13th. The movies were no less formulaic than Ft13th -- a group of teenagers, each with a single defining characteristic, are dispatched in some fashion relating to their one identifiable trait (the innovation here being that the characters do have one identifiable trait, as opposed to the "none" in other '80s slasher movies) -- but at least the "dream" approach gave the filmmakers license to create some wacky surrealist imagery. The visual of a character eating a pizza made up of the souls murdered by Freddy Krueger is incredibly stupid, but I can't say I've seen anything like it in another movie. 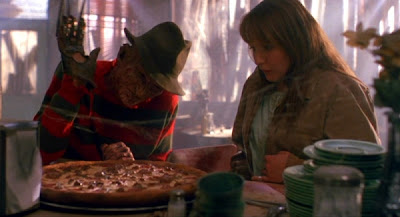 Speaking of the filmmakers, the Nightmare series boasts a pretty impressive lineup of directors -- probably the best this side of, once again, the Alien franchise. After Wes Craven, you've got Chuck Russell, Renny Harlin, Stephen Hopkins...and Rachel Talalay. For a while in the '80s, the series was a breeding ground for new talent, and launched at least a couple of careers. Let's not hold Freddy Krueger responsible for the fact that those careers would give the world Lost in Space and Cutthroat Island and Tank Girl.

I'm totally not happy with this answer.

Mike: The Saw Franchise - Picking my favorite horror franchise isn’t that simple. There doesn’t exist a consistently great, or even good, string of horror films. In fact, the only thing consistent with most horror franchises is how awful they remain. Halloween is my favorite horror film of all time, but it may have the most boring franchise under its name. Friday the 13th is kind of fun throughout, but never, ever, good. The Nightmare on Elm Street movies may make up the best franchise, but I’m going to have to choose a franchise that I never thought I’d pick for anything with the word “best” in it: the Saw series. 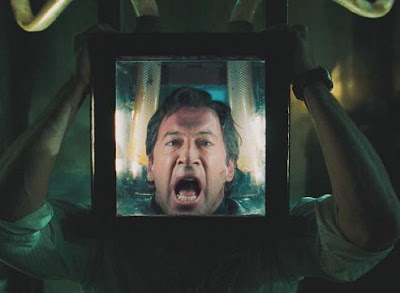 Patrick and I did a podcast on the first six films (there are a total of seven), so I suggest you go back and listen to that if you want a more detailed analysis. For the purposes of this piece, I’ll simply say that while Saw and its sequels are not necessarily good movies, they at the very least attempt to do SOMETHING with the franchise. The seven movies really tell one giant, crazy story, with unbelievable continuity. It was fascinating to watch a throw-away character in one movie, reappear as a MAJOR FUCKING CHARACTER a few movies later. It’s batshit crazy, and often times ugly, but I give the Saw movies an “A” for effort, which is saying a lot considering the laziness that permeates throughout most horror franchises.

JB: I believe I have answered this already.
Posted by Patrick Bromley at 7:10 AM