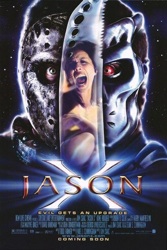 I once thought Jason X belonged at the bottom of the Friday the 13th barrel. It doesn't.

I remember liking only one scene in Jason X, the tenth (10th!) movie in the Friday the 13th franchise, when I saw the movie opening weekend back in 2001. While trapped on the holodeck of the spaceship he's inhabiting (yes, you read that correctly), masked slasher Jason Voorhees' potential victims attempt to distract and fool him by holographically recreating the Crystal Lake of the 1980s: two attractive young women stand in the woods, scantily clad, and say they want to have unprotected sex. They then climb into sleeping bags so that Jason can recreate the kill from Friday the 13th Part VII: The New Blood (incidentally the favorite kill of the whole series of F This Movie!'s own Mike Pomaro) by smashing them into a nearby tree.

This, to me, seemed like the only self-aware sequence in the entire film, and in the age of post-Scream self-reflexivity, I was convinced that Jason X needed more of this. Playing the Friday the 13th formula straight in 2001 was no longer effective. It needed to call more attention to its own tropes and make fun of them. 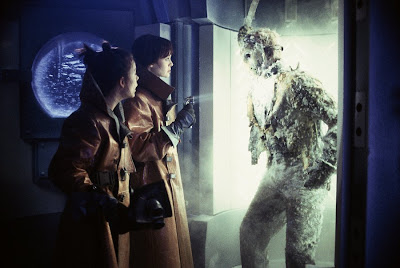 Maybe because I've lost my taste for lame irony and self-parody in the decade since Jason X was released, I find myself liking the approach the movie takes in 2012 much more than if it had just been 90 minutes of the holodeck scene. I thought the majority of the movie was humorless back in 2001. I'm not sure which movie I was watching, because Jason X is definitely NOT humorless. It's actually kind of clever without ever being actively jokey, and the tone it adopts is one that's not easy to pull off. No one is more surprised by this than me.

(Note: I have also long believed that Jason Goes to Hell: The Final Friday, which is as-or-more hated as Jason X, achieves this same tone. It might be due for a rewatch to confirm this. I suspect it's because I've listened to the commentary track, and the filmmakers seem very aware of the movie they made. I don't think this translates to the actual film.)

Now, I'm not suggesting that Jason X is a traditionally "good" movie, but it is much better than I remember it being, and probably belongs in the upper half of the Friday the 13th franchise. Originally made as a way of keeping the series afloat while not messing up any potential continuity with Freddy vs. Jason, at that time still in its loooong development stage, Jason X opens in the then-future of 2010 with a team of scientists planning to cryogenically freeze Jason Voorhies after numerous attempts to kill him have failed. Along comes asshole David Cronenberg (just the first of many pleasant surprises in the movie), who insists on taking the body of Jason to study how he's able to regenerate over and over again. That doesn't go well, and before long everyone is dead except for Rowan LaFontaine (Lexa Doig), who is mortally wounded in her efforts to get Jason into the freezing chamber. Unfortunately, there's a leak in the cryonic fluid and Rowan ends up frozen as well.

Cut to the year 2455, as a team of students on the now-desolate Earth (everyone and everything has been relocated to Earth Two) find the Crystal Lake Research Facility and recover the bodies of both Rowan and Jason. They bring them back aboard their ship, the Grendel, and revive/heal Rowan through the use of nanite technology. Professor Lowe, who is leading the field trip expedition, secretly announces his intentions to try and sell the body of Jason Voorhies, which he believes to be incredibly valuable. Of course, Jason (being Jason) doesn't stay frozen or dead for long, and begins killing off both the students and the military on board the ship. It's up to to the surviving members of the team (which includes a female android called KM 14; between her presence and the military presence, writer Todd Farmer is clearly a big fan of Aliens) to defeat He Who Wears the Hockey Mask.

What Jason X will be remembered for -- beyond its ridiculous "Jason in space" premise -- is the appearance of "Uber-Jason," the technologically enhanced cyborg version of the character created by nanites after he's wounded in a fight. 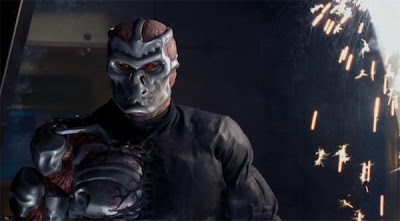 Uber-Jason is outrageously dumb. But, then, so is regular Jason. If you're a die-hard devotee of the Friday the 13th franchise, you probably hate Uber-Jason because it departs from the iconography of the character. But you probably also hate Jason X, because it sends the series into space. As someone who has always tolerated -- even, at times, enjoyed -- these movies without ever feeling any real connection to them, I'm not bothered by the presence of spaceships and Cyborg Voorhies. Farmer (who also appears in the movie; he's the big bald guy who does the battle simulation with Azrael) realized that there was very little blood left (GET IT??) in the series as it was, and between that fact and the constraints placed upon him by the Freddy vs. Jason mess, decided to take things in an extreme direction -- almost as a commentary on the previously ridiculous places to which the series has gone (Jason vs. the telkinetic, Jason Takes Manhattan). The movie has fun with the series without just making fun of the series. If all you want is another version of the same Friday the 13th, just get the 2009 remake. It's not just another Friday the 13th movie -- it's every Friday the 13th movie mashed into one. And it sucks.

Having viewed a number of Friday the 13th movies just prior to rewatching Jason X, one thing I can now appreciate about this installment that improves upon the previous films is that everyone finds out that Jason exists and is on the rampage almost from the outset. There are hardly any scenes of people splitting up, going off on their own, being stalked and subsequently murdered before they even realize what's happening. These people work together. They get help. They fight back. And while the movie isn't outrageously gory, there are some inventive makeup and gore F/X that should please fans of that sort of thing (the girl who gets her face frozen in liquid nitrogen and then has her head shattered like Simon Phoenix is a standout). There's also a lot of bad CGI and generic characterization and weak acting. It may stray from the norm in a lot of ways, but it's still a Friday the 13th movie. 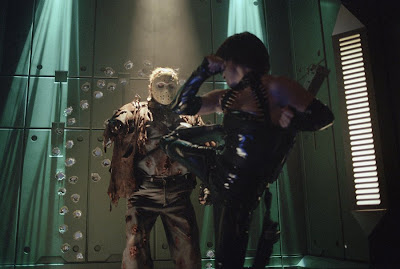 As is always the case with these Take Two columns, it can be tricky to determine what has changed between seeing a movie the first time and seeing it again years later. The movie never changes; I do. But I think there's more to Jason X than just me changing. I think the context of the movie has changed. In 2001, Jason X somehow felt both stiff and silly -- a wrongheaded attempt at restarting a franchise that, like the title character, probably should have stayed dead. But horror movies -- and movies in general -- have changed a lot in the decade since, and now there's almost a kind of sophistication to what Jason X does. It's self-aware without just turning into nonstop parody or camp, and it's smarter than either its stupid premise or the franchise's history of stupidity would suggest. I still don't really think Jason X is a good horror movie, but it's a pretty good Friday the 13th movie.

Maybe some other franchises should take a page from this one and send their characters into space. Freddy in space. Leatherface in space. Leprechaun in space...oh, wait. Never mind. 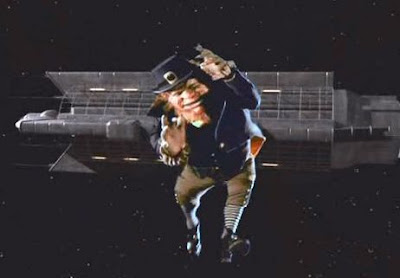 Posted by Patrick Bromley at 6:30 AM