Unsung!: The Woman in Black 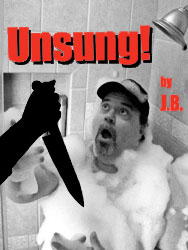 I was such a fan of this film when it was released earlier this year, and my estimation of it continues to grow.  I have noticed that several readers have already posted seven-word reviews of The Woman in Black for our F This Movie! Scary Movie Challenge. Joseph Finn wrote, “No one gets out alive. Or sane.” Mac McIntire wrote, “Better start polishing that ‘Best Cinematography’ Oscar.” Noting the film stars Daniel Radcliffe, Heath Holland posted this review: “This scared the Slytherin out of me.”  Perhaps this film has already started its slow, stately, and steady progress towards being fully sung?

This is exactly the type of horror film we horror fans need to embrace. And when I say, “embrace,” I mean “hug a ghost that is full of rotting maggots and weevils.”

Much like our current crop of political candidates, The Woman in Black tends to polarize people.  I have talked to students who loved its spookiness and “old-school atmosphere” and students who hated it because it “was boring and not scary enough.”  Perhaps The Woman in Black serves as a modern Rorschach test of what you want in a horror movie. Your opinion of the film tells us more about YOU than about the film itself. The audience ratings at IMDb reflect this too; the film received a rating of only 6.5/10 from just over 61,000 “voters.” The film was a modest success; I remember that it stayed at my local theater for weeks and weeks and weeks. The Woman in Black took in more than 50 million dollars on a budget of just under 18.

THE PLOT IN BRIEF: A depressed, widowed lawyer, Arthur Kripps (Daniel Radcliffe) has been letting things slide at work. His boss gives him one last chance to save his job: he is to travel to a remote village and untangle an ownership dispute over a large estate, the Eel Marsh House.  After receiving a spectacularly chilly reception from the village locals, Kripps learns that the estate plays host to a vengeful, child-killing ghost. 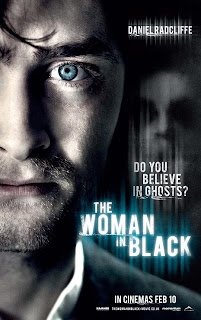 I have talked to several people who went to see this film in its original release for one reason: Daniel Radcliffe in the lead role. They wanted to see if he could convincingly play a character other than Harry Potter. Radcliffe acquits himself admirably here. His performance is both the highlight and the linchpin of the film. He is onscreen alone for so much of the running time. If his performance had failed, the entire enterprise would have crumbled around him. His performance must achieve a difficult balancing act; he needs to be both a sympathetic father driven nearly mad with grief…and a believable “audience surrogate” once things get scary.

I love that The Woman in Black favors atmosphere and suspense over gore and shocks. I love that CGI is judiciously employed to serve the story instead of becoming an end in itself. I love the way the film slowly and methodically ratchets up the fright. I love just how many “Boo moments” this film contains. All horror films should have “Boo moments.”

This is a haunted house picture that utilizes one of my favorite tropes of the genre to great effect.  Extended sequences of “dolly ins” and forward tracking shots lead to something that psychologists call the hypnagogic state, a simulation of that moment between wakefulness and sleep. Our brains do not quite know how to handle the relentlessly moving camera because the only other time in our lives when we move forward while immobile is when we are asleep and dreaming. This is one of many reasons that this film is likely to “work” better on a giant theater screen instead of a home television or laptop.

Another aspect of the film I admire is its ending. Ever since Henry James ended his novella The Turn of the Screw by asking, in effect, “So, dear reader, do you think it MIGHT have been ghosts?” spooky stories have been plagued by creators who want to have it both ways -- as if having a rational explanation for all the horrible goings-on somehow improves the narrative. It reminds me of the countless silent films in which the supernatural is explained away in the last reel as being the work of an insurance investigator disguised as a vampire or some unscrupulous relatives trying to scare a young lady out of her inheritance. Or like EVERY episode of Scooby-Doo.

Some people love the ending of The Woman in Black, and some people hate it. I will not spoil it here.  The one thing you can say about the ending is that AT LEAST IT PICKS A SIDE. So suck it, Henry James.

Some horror fans have actually been dismissive of The Woman in Black (and Cabin In The Woods) while continuing to champion shit from their golden teenage years like Friday the 13th. Patrick and I have discussed recalcitrant horror fans more than once on the podcast. Why are some horror fans (a group that, based on the evidence, is perfectly willing to sit through more unredeemed and unredeemable drek than any other subgroup of movie fans) so unwilling to get behind anything new or innovative? It boggles my mind.

ON A NOT-ENTIRELY-UNRELATED NOTE: F-Heads in the Chicago Area! See you at the Portage Theatre Saturday, October 20th through Sunday, October 21st at the MASSACRE! First 20 fans that come say “hi!” get an F This Movie button.

Boo!
Posted by Patrick Bromley at 6:30 AM