What Do You Want from a Horror Movie? 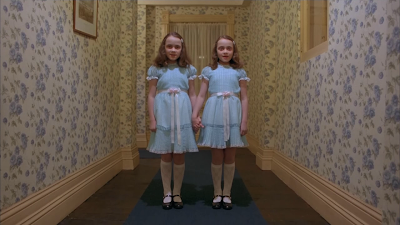 Patrick:  ‪Because it's Scary Movie Month, I want to try an experiment.‬ Because MAD SCIENTIST.

Let me ask you a very broad question. What do you want out of a horror movie?

Doug:  ‪That is a broad question. How about a broad answer? I want to be scared.‬

Patrick:  ‪Ok, a-hole. WHAT SCARES YOU??‬ I made my voice loud to scare you.

Doug:  ‪So that's what all CAPS means, eh? Well, then, color me FRIGHTENED.‬

Patrick:  ‪I ask because I don't know how important being scared is to me when I'm watching a horror movie.‬ I don't find many of the scary, but I still love them.

Doug: ‪That's because you're a weirdo. I am drawn to horror films that are more subtle and suspenseful and creepy. And those things are SCARY.‬ I've never been a huge fan of "slasher" movies -- I like films that mess with your mind. Odd sounds, feelings of being alone ... that sort of thing. 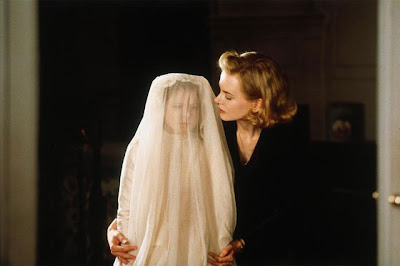 Patrick: This is why I wanted to bring this up. We both love horror movies. But we seem to like them for different reasons.‬

Patrick: So many monsters. So few hugs.‬

Doug: ‪Don't get me wrong -- I can appreciate and respect all kinds of scary movies, even those that I don't find particularly, well, "scary." I just like those more that are both well-done and spook the heck out of me.‬ For example, I'm not exactly "scared" by old Universal films, but I can understand why they're the best.
I'm taking your question at face value -- what do I "want" out of a horror movie? To be scared. Ah-no-ah-duh.

Patrick: We're going to talk about a movie on the podcast later this month, and I don't want to spoil what it is, but you love it and I don't.‬

Doug: Well, "love" is a strong word.‬ I find it "effective." BUT, I also haven't seen it in years, so the re-watching and subsequent discussion should be interesting.

Patrick: Don't sugarcoat it. You love it and want to have 10,000 of its babies.‬

Patrick: I only bring it up because I think it speaks to a big difference in what we respond to in horror movies.‬

Patrick:  ‪Here's an example: I like A Nightmare on Elm Street better than Halloween.‬

Doug: The movie or the holiday?‬

Patrick: ‪Don't make me choose.‬
I'm not sure I care about developing tension. That's something that gets talked about a LOT in conversations about horror movies, but I would rather watch something with a lot of imagination.

Doug: Conversely, I think developing tension is HUGE. Obviously, imagination is key, but when it comes to horror films, tension is king. I mean, What Dreams May Come has "imagination" ...‬

Patrick:  ‪And it scared the hell out of me.

I'm not saying I want ONLY imagination.‬

Doug: YES YOU DID. THAT'S WHAT YOU SAID. I SAW IT.‬

Patrick: But I'll take a cool monster over suspense just about any day.

Doug: And, for me, monsters are all, meh. Which is why I had a hard time coming up with my "favorite" movie monster. I copped out and chose the clown from Poltergeist, because HOLY SHIT THAT THING IS SCARY. But it's not a traditional monster.

Patrick: Tell it to the clown.‬ He's behind you right now. 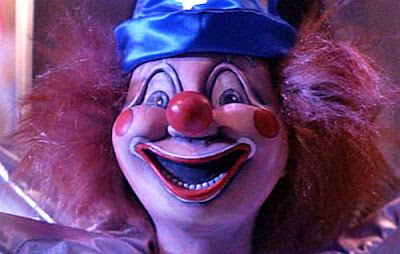 Doug: OK, Mr. Kick Ass. Mr. Rubber-Burner ... what, aside from "imagination," do YOU look for in a horror film?‬

Patrick:  ‪I don't know if there's one specific thing. I just like all the signifiers of a horror movie.‬ If there's blood, great. If there's a monster, great. Not that I'm a big gore guy.

Patrick: Sue me. I love the internet.‬

Doug: Listen, as soon as I see the monster, I kind of check out. For me, the "unknown" is far more interesting. I'm using a lot of "unnecessary" "quotes," aren't I?‬

Patrick: ‪BOO to the unknown. YAY to the known.‬ Let me tell you about a little movie called The Happening. The wind tries to kill people. What are they fighting? It's UNKNOWN!

Doug: It's plants, Patrick, and everyone knows THEY ARE THE SCARIEST.‬ Stupid murderous plants. I hate plants! Arrrgh! Plants!

Patrick: ‪Tell it to the clown. He's behind you.‬ HOLDING PETUNIAS.

Patrick: The thing that's great (great?) about horror movies is that there are SO MANY types and subgenres. Everyone has their thing. There's gore people and monster people and slasher people. You're more of a "door slamming" guy.‬

Patrick: ‪But is that what brings you back to a horror movie over and over again? Will you put something on because you know it will scare you a third or fourth or fifth time?‬

Doug: ‪Interesting point.‬ I think, in some instance, yes, absolutely. If it's done really well, I will come back for that creepy feeling. Like in The Shining. I'm not scared anymore by the twins or the woman in the bathtub, but it's still super creepy. The movie is obviously much more than cheap thrills.

Patrick: ‪What made me think of even bringing this up is because you love Night of the Living Dead and I prefer Dawn of the Dead. And I think it's a great example of where we differ in what we want out of a horror movie.‬

Doug: ‪I agree. The first one's the scariest, and the second one's the orange-bloodiest.‬ 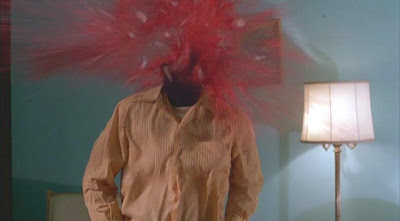 And, obviously, your favorite genre (as previously discussed) is horror. I love horror, but it's not my first go-to. That would be war movies. Or Zac Efron movies.

Patrick: ‪But there are so many things that bring me back to Dawn. The characters. The gags. The ideas. Night of the Living Dead is a great movie, but it only works on my gut.‬ Dawn of the Dead affects me in more places. Like my pants.

To your point, I concede that the very basic statement of "I want to be scared by a scary movie" has it's limitations. Further, many of these types of scary movies (the Paranormal Activity franchise comes to mind) would never hold up to repeat viewings (never mind that the first viewing is usually pretty effective).‬ So, yes, my broad answer of "I want to be scared" is a little silly. But I do think it's the foundation of what I look for in a horror film. If I can be scared AND get wrapped up in a great story with great direction and unique performances, great!

Patrick: ‪You're not wrong. I think that's the great appeal of the genre.‬ I just don't really care if I'm scared or not. Something is broken inside me.

Doug: I knew that before we even started this conversation!‬ If you don't care if you're scared, then what's the appeal of horror?

Patrick: I don't know what it is for me. That's part of a bigger conversation, I think. One that would require a doctor with degrees present.‬ It just goes back to a fixation I had with monsters from as early as I can remember.

Doug: ‪"Mr. Bromley, please lay down, relax and tell me about ... your mother."‬

Patrick: ‪I think scary is great and all, but it has no lasting power for me.‬ I thought The Descent was the scariest movie I've seen in a long time. One of the only movies to ever scare me, really. And it's great. At the same time, I have very little desire to ever revisit it.

Doug: ‪I agree that The Descent was scary. And great. And really well done. I am FLABBERGASTED that you have no interest in seeing it again.‬ Is it because you're afraid? You're afraid, aren't you.

Patrick: The only scene I couldn't watch again is when the one girl breaks a bone. It was the worst.‬ But there are so many movies I will go back to before that one, even if that one is better. It's just that it's better in a very narrow way, even if that's effective. 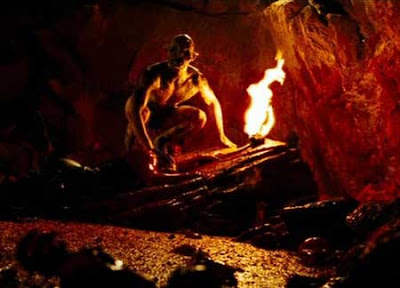 Doug: The one thing I'm not crazy about in The Descent is the ending. And I won't spoil it, because I'm not a jerk. But it was very unsatisfying to me. THAT might be a reason to not see it again.‬ But, f'real, it's got so many other good elements. The one thing it might be missing is a little humor. Regardless, it's incredibly effective.

Patrick: I don't disagree. I think it's a great movie. But it speaks to this question of 'what do we want in a horror movie,' because as good as it is, I'll still re-watch A Nightmare on Elm Street first.‬

Doug: ‪Do you think A Nightmare on Elm Street is scary? I do. And I think, having seen it for the first time as a kid, it really spoke to some fears of nightmares and death and the supernatural.‬ But, if I'm reading what you wrote correctly, you would like it ... even if it wasn't scary?

Patrick: Correct. I think it presents scary ideas -- that you can't escape the boogeyman because you're asleep and can't wake up -- but the movie doesn't actually scare me in a visceral way, if that makes sense. And it's one of my favorite horror movies (it becomes more so with every passing year), so the 'scare' factor isn't an issue.‬

Doug: So, then, what is it? What do you like about it?‬ 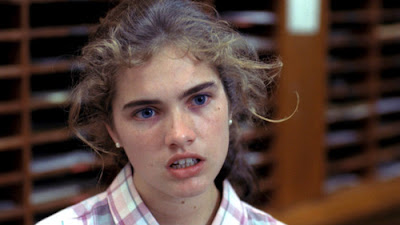 I like the imagination on display. I like how respectfully and seriously it treats the characters. I think it has great ideas and a good way of visualizing those ideas.

Doug: ‪I completely understand and, seriously, agree with that. With everything you've just submitted, actually. I guess my follow-up question, then, is why horror? Almost every genre has films which show imagination and respect towards its characters.‬

Again, for me, if we're talking "HORROR," I need to be scared -- there needs to be some stakes (scaredy stakes). Otherwise, I'll just watch an imaginative drama.‬

Patrick: ‪But imaginative dramas don't have monsters. And people being stabbed.‬ Because that's part of it, too. It all works together.

Patrick: I like anything when it's done right. Gore isn't necessary (and if it's the whole show I'm not interested), but there's certainly a way to do it that's super effective.‬ There are plenty of horror movies I like that are bloodless, though. I will say I don't know that I really respond to just the 'suggestion' of something -- the Haunting (the movie, not the haunting) approach.

Doug: Oh, I totally respond to suggestions. It's how you got in my pants on our first date!‬
I'm going to go out on a [safe] limb here ... is another BIG reason you like scary movies is that they typically come out in the fall, which happens to be your favorite season?
^^great sentence, btw^^^

Patrick: ‪No, I don't think so. I love them year round. In fact, part of the reason I like the fall is because of scary movies, not the other way around. But this is a chicken/egg debate that's not worth having.‬

Doug: So, to summarize, there's not one specific thing you look for when it comes to horror movies.

Patrick: ‪I like them to be good. How's that?‬

Patrick: There's definitely a kind of horror movie that I'm drawn to more than others.

Patrick: ‪I don't care for religious horror. I rarely like ghost stories. J-horror remakes leave me cold (again, usually involves ghosts).‬ I'll take a slasher movie as long as it's not IN YOUR FACE with its brutality.

Doug: ‪I, on the other hand, consider "being scared" to be part of an effective horror film. Suggestion. Creepiness. Subtly. The unknown.‬ Everything else you said? I'm good with that.

Doug:  ‪I think so. I need to eat some lunch. Some scary lunch.‬