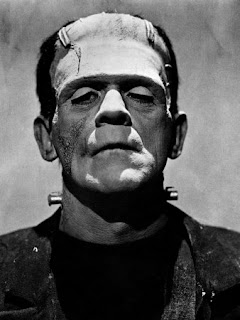 You can't have scary movies without the Something Scary. Here are some of our favorite movie monsters.

And don't forget to keep posting in the Scary Movie Challenge III! You guys are killing it so far.

JB: Frankenstein’s Monster… is my favorite monster… of all the monsters. The reasons for this are quite personal, though for all I know, he may be a universal symbol of the human condition for a lot of people.

Frankenstein’s Monster did not ask to be born. He did not ask to be stitched together from pieces of dead men and shocked back to life with electricity. He was the unfortunate byproduct of a vainglorious man who challenged God. Once alive, the Monster was abandoned by his creator. Sometimes we all feel like a motherless child; the Monster is our perpetual motherless child.

Frankenstein’s Monster is the only one of the original Universal Pictures lineup who could make you cry. Sure, he is scary when he is angry, but in reality, he is just so goddamned sad.

Because of his rough exterior, most people misjudge the Monster and never see that he is only looking for care and safety. Because he cannot inspire kindness and acceptance, he chooses instead to inspire hate and terror. The Monster’s curious predicament speaks to me in ways far too personal to share.

I also literally have bolts in my neck.

Mike: Xenomorph, Alien - While my instinct is to pick one of the big boys as my favorite movie monster, like Dracula or Wolfman, I'm going to move away from the Universal classics and move on to a more modern classic: Alien.

This movie works on so many levels, but one of the strongest is the Alien itself. All black, slimy, phallic, and downright scary, the Alien is an oddly beautiful design that has stood the test of time. Really all of the designs in Alien are fantastic, from the face hugger to the chest burster, but it's the adult Alien that will forever haunt my dreams. Add a sense of speed and a terrible hiss, and the Alien is a perfect movie monster. In a genre that has so, so many forgettable creature designs, Alien stands out as one of horror's best.

Mark Ahn: The Thing, The Thing (1982) - So “favorite” means “most terrifying?” What I love (HATE) about the Thing is that I don’t really know what it looks like. There’s the little spindly spidery one with the legs (gross), then there’s a slightly larger one, then there’s and even bigger one where it takes that one guy’s upside down head (you know what I’m talking about). Its blood gets explosive and angry. UGH. It can rip you inside out and then puts all the pieces back together the wrong way! And just one little piece needs to live for it to survive. I’m getting itchy just thinking about it. Pass me the scotch, MacReady.

Erich: The Gremlins, Gremlins - I know the movie’s got a lot of jokes and it takes place at Christmas instead of Halloween, but Joe Dante’s twisted horror fantasy Gremlins messed me up plenty as a kid. When we first meet Gizmo the Mogwai, he’s this adorable ball of fur. High-maintenance, sure, but cute cute CUTE. Then comes the water, and the fried chicken, and wiggly rules about not eating after midnight. After that, it’s all teeth and claws and hypodermic needles in butts and motorized chairs rocketing into the Kingston Falls night. You say it’s not enough to include Stripe and his merry green band on a list of terrifying movie monsters? Consider this: In Chris Columbus’s original script they decapitated Billy’s mom and ate his dog. PLUS, in Gremlins 2: The New Batch, the beasties stage an elaborate song-and-dance number. If musical theater isn’t scary, I don’t know what is.

Alex: The Goddamn Spiders from Arachnophobia - Because ghosts, trolls, nuclear-affected iguanas, and Stay-Puft marshmallow men are fictitious, and hairy eight-legged demon spawn that can inject your body with poison through their motherfucking jaws are real. Because you become instantly paralyzed just before you die from their bite. Because they do not have the decency to let you finish watching Wheel of Fortune before they shuffle you off this mortal coil. BECAUSE THEY ARE CRAWLING ON YOU RIGHT NOW, PROBABLY.

Now, the particular arachnids found in Frank Marshall's 1990 comedy-horror (Is "staple" too strong? Sure is. Won't stop me, though.) are a bit of stretch -- the offspring of an unprecedentedly lethal Venezuelan spider with your average house-dwelling arachnid. But that's beside the point. For all the goofy schlock in the movie, it effectively seizes upon a very simple concept: Spiders are goddamn scary.

In the movie, one character analogizes them to both troops being sent out to a battle as well as "little vampires." Not vampires with abstinence issues that glisten in the sun. Vampires that scurry over your body and drain all the fluids out because God/Nature/Random Mutation engineered them that way.
If you've made it this far, you've probably put together that I don't toe the hardcore horror line the same degree as so many of my FTM brethren. The genre staples notwithstanding (Psycho, Exorcist, Halloween, et al.), my proclivities will almost always drift toward horror projects with a certain amount of levity (Dead Alive, Cabin Fever, ya know?). And while Arachnophobia exclusively resided in the Comedy section of most video stores (Google it, kids.), there is nothing funny about something the size of a Blackberry that can kill you in three seconds. 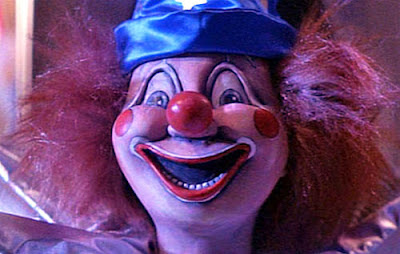 Erika: Captain Spaulding, House of 1,000 Corpses/The Devil's Rejects - Doug is right. Clown makeup is scary. It's even scarier when it's on the face of Sid Haig. I can't figure out if these two movies work for me because they speak to so many fears I already have, or if I'm now afraid of those things because of these two movies.

Seriously, in order of quality, there's American Werewolf and The Wolf Man and The Howling and then probably Silver Bullet and then there's everything else. That's right -- Silver Bullet is the FOURTH BEST WEREWOLF MOVIE EVER MADE. The bar is not set high. My favorite movie monster has made so few good monster movies.

Here's why it makes no sense that my favorite monster is the werewolf: I hate transformation scenes. Always have. That's like saying you love zombie movies but you hate it when someone gets shot in the head. But as far back as I can remember, I've hated them -- something about all the pain that the person appears to be in upsets me (it's supposed to) and I can't handle it. I used to love the "Thriller" video, but I had to leave the room when Michael Jackson turned into the werewolf/cat monster/metaphor for homosexuality. I would watch Terror in the Aisles whenever it showed up on the local UHF station, but had to change the channel when they showed the clip of Rick Baker's Oscar-winning (more like Oscar CREATING) transformation in American Werewolf. I can handle it better now, but it's still my least favorite part of the movie.

What the fuck is wrong with me?

Posted by Patrick Bromley at 6:08 AM