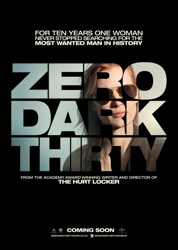 Zero Dark Thirty is a very good movie. Nothing more, nothing less.

Kathryn Bigelow heads back to the Middle East in her follow-up to 2009's The Hurt Locker -- the Best Picture winner that also made her the first woman to EVER win an Oscar for Best Director (great job, Academy! It only took 80 years) -- for a movie that chronicles the decade-long hunt for Osama Bin Laden. It's a no-frills procedural, about nothing more than it's about, and it's tense and smart and totally effective. If it doesn't amount to anything more than that, I'm ok with it.

The movie opens in blackness, as audio from the morning of September 11, 2001 plays on the soundtrack. It's a touch that some might consider exploitative, but Zero Dark Thirty isn't cashing in on the horror of that day for cheap entertainment. It's a necessary reminder that contextualizes everything that happens over the next 150 minutes:

This is what all of what follows is for. 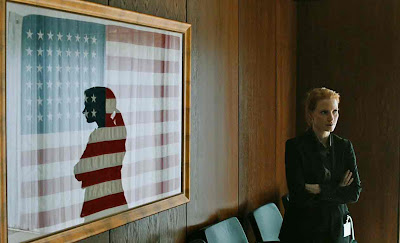 Jessica Chastain plays Maya, a CIA analyst assigned to find the man responsible for 9/11 and uncover any and all new plots to attack to prevent further death and destruction. The movie follows her throughout the course of roughly a decade, during which her efforts brush up against an intense and funny Jason Clarke, whose Bush-era interrogation techniques don't exclude torture; Jennifer Ehle, a fellow analyst who at first is competitive but fast becomes a friend; Chris Pratt, Joel Edgerton, Edgar Ramirez and Scott Adkins as Navy SEALS; Mark Strong, Kyle Chandler and James Gandolfini as higher-ups and many others. What Zero Dark Thirty does so well is make us understand just how hard a job the CIA had -- what an uphill, impossible battle it was to find a needle in a haystack of needles. How many people had to do their jobs very well. How many agencies had to cooperate and coordinate their efforts. And, yet, like the manhunt itself, the movie keeps chugging along, stripping away the false leads, always closing in on the target. The movie streamlines complicated processes so that they're easy to follow without ever dumbing things down. It's long but doesn't feel it, moving with the propulsive energy of a Christopher Nolan movie without making the narrative leaps that plague a lot of his work.

Kathryn Bigelow is a great director -- one of the best currently working, particularly when it comes to action -- and it's her skill at creating a visceral experience that makes Zero Dark Thirty what it is: one of the best-directed films of the year. Like Argo from earlier this year, Zero Dark Thirty is masterful at generating tension and suspense from events even when we already know the outcome; the last half hour of the movie, in which SEAL Team Six raids the Bin Laden compound, is particularly incredible. But whereas with Argo we eventually sense the manipulative hand of the director -- it feels very much like a movie -- Zero Dark Thirty keeps things grounded throughout. The movie does not invent drama. It rarely (with the exception of one sequence) heightens a moment to increase the tension or raise the stakes. Yes, things are incredibly tense and the stakes are high, but those elements spring naturally out of the story being told. 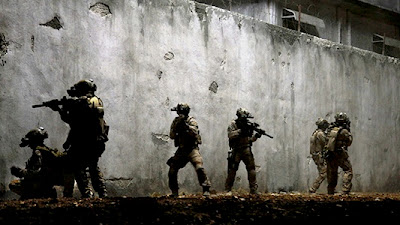 I liked Bigelow's previous movie, The Hurt Locker, but it's a movie I have some problems with. It's much more of a character study than Zero Dark Thirty, devoting itself to exploring why a certain type of person does the things he or she does. In that, I think it has an occasional tendency to overreach. Zero Dark Thirty strips away most of the character study aspect (which isn't to say there isn't any characterization; everyone in the movie creates a character in just a few minutes of screen time) and focuses on THE JOB. Yes, Maya is driven, and after a time even borders on obsessed. But the movie never becomes about her obsession, or really about her at all. She is merely the conduit through which the story is framed -- without a reference point at the center, it would be easy to get lost in all of the names and locations. Chastain is very good and appropriately understated; she knows that she is only a piece of a much bigger puzzle. She just happens to be the piece we're sticking with.

It will be interesting to see the reaction to Zero Dark Thirty when the movie is released later this month. The movie is already picking up critics' awards, winning Best Picture from the New York Film Critics Circle just a few days ago. It will no doubt be compared endlessly to The Hurt Locker (even I couldn't resist), not just because it's Bigelow's second consecutive movie set directly in the aftermath of 9/11, but because it's the follow-up to her Oscar wins for Best Picture and Best Director. Like pretty much every other major release this year, I'm sure the response will be hyperbolic in both directions -- contemporary cultural dialogue only exists in extremes. It's incredibly well made, but I find it hard to be passionate about it after the fact. It's a movie that inspires an emotional response while it's playing -- it's super gripping and intense -- but not much of one after the fact beyond the obvious catharsis that comes from (SPOILERS FOR ACTUAL HISTORICAL EVENTS) seeing Osama Bin Laden shot in the fucking head. It is expertly made. It provides a good account of an important chapter in our recent history. If it lacks the takeaway of other Great Movies, that's not such a bad thing. It's about the job. The job got done.

Good job.
Posted by Patrick Bromley at 7:08 AM