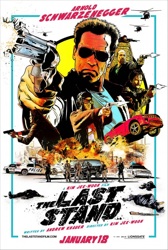 Arnold Schwarzenegger is back! Sort of.

The Last Stand brings Arnold Schwarzenegger back as the star of a movie since Terminator 3: Rise of the Machines a full 10 years ago. Sure, he's made cameo appearances in The Rundown and The Expendables and had a slightly bigger role in last summer's The Expendables 2, plus governed the state of California and fathered an illegitimate child, but he hasn't taken the lead in a decade.

I would actually argue that The Last Stand is the first real Schwarzenegger movie since Eraser in 1996. While he made several movies between Eraser and T3, none were really Schwarzenegger movies in the classic sense. In some cases, like End of Days and Collateral Damage, he was experimenting with his onscreen image; in others, like Jingle All the Way and Batman & Robin, he was just floundering. And while his latest effort doesn't quite bring back Golden Age Arnold -- his acting is a little rusty, there's little self-effacing humor (except maybe for "Old," a good line that's been spoiled by all the trailers, and another moment where he pats his belly) and mercifully few one-liners -- at least he's back to being a kickass man of action instead of a depressed mope or cartoon dipshit.

He plays Ray Owens, sheriff of a small border town called Sommerton Junction with a staff of only three deputies. When a notorious drug kingpin (Eduardo Noriega of Abre los Ojos) escapes federal custody in a custom Corvette and heads for the Mexico at 200 MPH and Sommerton Junction is invaded by heavily armed mercenaries, Owens and his team -- which also includes a goofy gun nut played by Johnny Knoxville (who gets billed right alongside Schwarzenegger on the poster, which is fucking blasphemous) -- are the only thing that stand between between escape and justice.

As someone who has waited nearly twenty years to see Arnold Schwarzenegger get back to doing his thing on the big screen, there was a good chance I was going to like The Last Stand whether it was any good or not. It unites one of my favorite current filmmakers with one of my favorite movie stars of all time. It would be like if Brian De Palma made a movie with Tom Hanks.

The movie isn't great. Pretty far from it. It doesn't rank in Schwarzenegger's Top 10, though it doesn't belong at the bottom, either. In many ways, it's the right vehicle for his return: he doesn't have to carry the whole thing, it's fun and entertaining without becoming too silly and the pairing of the actor with Korean filmmaker Kim Jee-Woon alone makes the movie worth seeing. It's unfortunate that so much time is spent away from Schwarzenegger and his deputies; nearly equal screen time is given to both the efforts of federal agent Forest Whitaker's eye and to bag guy Noriega (it reminded me a little of the Dwayne Johnson movie Faster in that way), and both of those story lines -- the way they're written, shot and acted -- are pretty terrible. The movie also wastes a lot of time, essentially spending an hour building up to its last act. The good news is that the finale is worth the buildup, with a nonstop barrage of action and an insane number of bullets spent. Jee-Woon knows how to stage a sequence for maximum payoff, so there are bursts of violence that have us laughing and cheering at the same time -- they're punchlines with squibs. There's hardly a cliché left unturned, but the whole sequence has enough high points that they can be overlooked.

Where The Last Stand is most interesting is in the way that it biographically reflects where Schwarzenegger is in life in 2013. The movie doesn't shy away from his age (he's 65), but doesn't spend all kinds of time making jokes about it, either. It puts him in the position of Old Guard, surrounded by younger people who respect and look up to him for leadership and guidance -- there is some recognition that he can no longer do it alone. Even the title, The Last Stand, is telling: this is Schwarzenegger's last stand as a movie star. It will determine if there is still an audience who wants to see him carry an action movie. (Even if they don't, he's got two more due out this year, so fuck those people.) Based on the early box office returns -- the movie was outgrossed by the truly awful Gangster Squad in its SECOND WEEK -- it seems the fans have moved on.

But the connections to the star go deeper than what's apparent on the surface. I've said time and again that most of Schwarzenegger's '80s and '90s output cast him in the role of "The Other" as a way of explaining or rationalizing both his foreignness and his superhuman physique. But he's been a movie star for over 30 years now. America is his home. He was governor of one of the country's largest states for two terms. He's no longer an outsider. He's one of Us. That's why in The Last Stand, he's not the Other; he's the one protecting us from the Other. Though this is one of the few films I can think of where Schwarzenegger directly acknowledges his status as an immigrant, there's no question that he's on his home turf. He's playing less the traditional Schwarzenegger role and more the John Wayne, which makes sense because The Last Stand is very, very much a western.

So while The Last Stand is far from being Schwarzenegger's worst movie, it is probably Kim Jee-Woon's. I was worried going in that we were going to have another Hard Target on our hands, in which a celebrated director of Asian genre cinema is brought over to the States and bled of everything that makes him interesting. The Last Stand isn't that bad -- there's still plenty of inventive action choreography and amazing photography to suggest that, yes, this is a Kim Jee-Woon movie, but I don't think it's going to send anyone unfamiliar with the director's past movies scrambling to check out I Saw the Devil or The Good, The Bad, The Weird (even though they totally should). A lot of the problems have to do with the script, which devotes way too much time to the efforts of Forest Whitaker's eye as it tries to track down the bad guy and gets angry every time there is a mistake (and, as is so often the way in action movies, to be the dumb bureaucrat; at one point, Ray flat-out tells him EXACTLY what's going on, and Forest Whitaker's eye is all "Yeah, whatever, sounds like bullshit" like he's Paul Gleason's eye in Die Hard or something). Some of it might be budget related, as evidenced by some pretty awful outdoor green screen effects during the film's climax. It's very distracting.

After mugging his way through The Expendables 2 (a movie that's going to make about four times as much money as this one, despite not being as good) with a bunch of obnoxious references to his body of work, it's great to see Schwarzenegger really trying to do something good here. The Last Stand could have been another stupid victory lap -- a self-satisfied excuse for a movie that we should all consider ourselves lucky to be seeing. Instead, Schwarzenegger approaches it like he still has something to prove. The movie doesn't totally work, but it's a step in the right direction not towards restoring him to his former glory, but finding his new place in action movies. Things are never going to be what they were for Arnold. The Last Stand seems to understand that.
Posted by Patrick Bromley at 8:57 AM