I was 9 years old in 1991. 9-year old Adam had impeccable tastes and here were his top 10 movies. If you disagree, then you may be a stupid head who eats boogers.

1. Terminator 2: Judgment Day – Because I can’t believe I got to see this and OMG and Guns and Roses ‘You Could Be Mine’ music video.

2. Robin Hood: Prince of Thieves – Because Kevin Costner is awesome and a really good actor, the Sheriff was funny and swords/flaming arrows/danger.

3. Teenage Mutant Ninja Turtles II: The Secret of the Ooze – Because it has turtles and pizza and ninja and ooze and rap (Adam at 30 still hearts Technotronic).

5. My Girl – Because Home Alone is in it and he dies of bees which is sad but sad is OK sometimes.

6. An American Tail: Fievel Goes West – Because this is the movie that got me into Westerns (I wish that were a joke) and I had the cups from Pizza Hut.

7. Ernest Scared Stupid – Because there’s nothing Ernest CAN’T DO.

8. Bill and Ted’s Bogus Journey - Because the Grim Reaper is awesome.

9. The Super – Because the guy from Home Alone is playing basketball and he’s short.

10. Bingo – Because the dog wears sunglasses and there’s football in it. 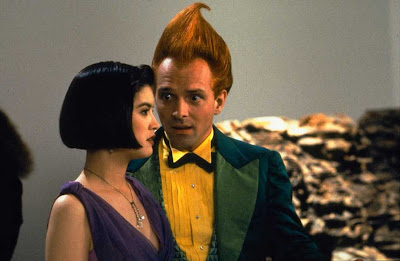 Posted by Patrick Bromley at 7:33 AM