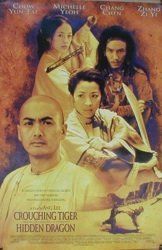 Roger Ebert famously said "No good movie is depressing. All bad movies are." It's true! So why do we never want to see these great movies again?

Adam Riske: I'm going to catch a load of crap for this one. I just know it. I feel like I've cracked Inception (or at least the interpretation I want to go with), and I don't want any subsequent viewings affecting it. I want the ending to be Cobb MAY OR MAY NOT be dreaming, but he is happy with where he is (with his kids) and doesn't care if it's real or not. Also, this movie depresses me for a very specific reason which I'll write more about in the next couple of months -- the thesis being that Leonardo DiCaprio, a great actor and movie star, is the most consistently misused actor in Hollywood!  Inception is a prime example of this. He should be Paul Newman, and he's acting like he's Robert Redford.

Alex: It’s probably a stretch to call Compliance, Craig Zobel’s ripped-from-the-headlines horror show of a drama, a “Great” movie in the way that so many others on this list are. But I tried to take the task of this list as literally as possible and the truth of it is, thinking of classic art that I would never give another shake is pretty bedeviling. This brings me back to my qualms with Compliance, which I hinted at in the up-fronts of the Adventureland show last fall.

I’ll be similarly cagey about the plot details here as I was there, because the surprise of the atrocities that play out were a critical factor in to my reaction to the film. It tells the true story of a fraud committed upon the unsuspecting employees of a fast food restaurant that results in some very objectionable circumstances for a pretty young employee. It is expertly filmed and downright hypnotic to watch, with a performance by Ann Dowd as the restaurant’s manager that ranks among the best I’ve seen in recent years.

The fact that the story is true is the real driver of my objections, and it enraged me so much that I started having something like an existential crisis relating to my own film fandom. A lot of times people will dismiss extraneous remakes or sequels as “unnecessary,” which is a criticism that doesn’t really mean anything to me. What film could ever be considered “necessary?” Necessary for what? To survive? To advance the conversation about X, Y, or Z? What is the purpose for films to exist anyway? These are the types of questions I was asking about after watching Compliance, and have been ever since.

That it made me ask those questions is why I will maintain it is a great movie, but its inability to even consider answering them is why it's on this list. I’m not saying I have cracked THE CODE FOR WHY MOVIES EXIST AND WHY WE TALK ABOUT THEM, but I think the obligation of telling a story like the one playing out in Compliance is to have a comment, any comment, on how or why such a horrible thing could happen, or at the very least examine how the experience weighs on its participants.

I’m not one for hyperbole, but I think the way Zobel chooses to tell the story, almost as a transcript of a horrible thing that really happened, is intellectually dishonest at best and downright immoral at worst. I see no attempt to give anything resembling context or these tragic events, or offer a statement about what such a thing could mean about humanity or society. This movie’s comment is: A bored person once did something terrible to a group of strangers, and you may not have seen it in the news, so here it is. In full. In a movie landscape teeming with “unnecessary” movies, what could be more extraneous than that?

JB: These movies tend to break down into three categories: 1) Perfect films that so moved you the first time you saw them, you are worried about breaking the spell; 2) Great films where you can “get” all there is to “get” in a single viewing; and 3) Classic films you have seen so many goddamned times, you could actually perform them in the living room for friends and family at the drop of a hat.

Films I would place in the first category: 2001: A Space Odyssey, Apocalypse Now, Being There, Brazil, Election, Hugo, Lawrence of Arabia, Lost in Translation, The Rules of the Game, Secretary, Three Kings, The Wild Bunch, and Woodstock

Films in the third category: The Graduate (I caught this a few months ago at the Music Box Theatre* in Chicago and remarked to myself after the screening,” I never need to see that film again.”) or any film I have used in class for the last thirty years. Once I retire; I do not think I will ever need to see Romeo and Juliet, Inherit the Wind, Slaughterhouse-Five, To Kill A Mockingbird, or any of the movies I screen in my film class EVER AGAIN! I have seen these films literally hundreds of times apiece. Sheesh.

*It is, once again, the happiest place on Earth.

Patrick: I think Gaspar Noé's Irreversible is pretty brilliant, but it hurts me to think about ever sitting through it again. It's the kind of movie that's tough to watch not just in content (a guy gets his head smashed by a fire extinguisher until it's not there anymore IN REAL TIME), but in form, too -- it's all inverted chronology (the movie is told backwards), endlessly swirling photography, low-frequency, nausea-inducing rumbles and punishing strobe lights. It's the kind of movie that's unwatchable to most people, and I don't blame them. It's repellant and pretentious and disturbing. It's also great, audacious filmmaking, but the movie's message -- TIME DESTROYS ALL THINGS -- is simple enough that I got it on a single viewing. I don't know how many more 10-minute rape scenes are going to make it any clearer.

Heath Holland: In the jargon of the time, Crouching Tiger, Hidden Dragon was the BOMB DIGGIDY. Back in the early days of DVD, you could tell if someone was a serious movie fan by whether or not they owned this one. Way back in the year 2000, Chow Yun-Fat was one of the coolest people ever. The DVD for this movie brought kung fu to the unwashed masses, offering a choice of subtitles or dubbing on the disc. You could also tell who was a serious fan by which option they chose. If they chose dubbing, you’d never speak to them again. You might let all the air out of their tires.

Having said all of that, I’ve taken all I need to from that movie, and repeat viewings will only take time away from the kajillion movies I’ve never seen before. And I don’t mind subtitles, but I remember this movie feeling like a year and a half instead of two hours. Confession: these days I find subtitled films to be tedious. Do you know how long Pan’s Labyrinth has been sitting unwatched on my shelf? 37 years, that’s how long. I keep telling myself I’m going to watch it, but I never do. Still, if anyone were to ask me, I’d tell them Crouching Tiger, Hidden Dragon is a great movie, because it is. I just NEVER WANT TO SEE IT AGAIN.

Mike: This is kind of cheating, but if Patrick lets me get away with it, here goes: Mean Streets is a movie I love and vowed a few years ago never to watch again. My reason was this: my freshman year of college was the most wonderful time I've ever spent in school. A big reason for that was my friend Steve Mack (we all called him Mack) that I met first semester in Film Techniques class. He was skinny with long black hair, glasses, and a love of all things movies. We hit it off right away and bonded over our mutual love of Martin Scorsese. I can go on and on about Mack, and that semester in general, but I'll save that for a future article. What I will recount is one of my favorite memories. It was the last day for our History of Cinema class. We had taken our final exam and all we were going to do that day was watch Mean Streets. While I was already a big Scorsese fan, somehow seeing Mean Streets had eluded me. This was my first time seeing it, and I was excited. Before class, myself, Mack, and our two other friends James and Steve Albertson went to a nearby liquor store and Mack and James bought beer (they were old enough), while Steve Albertson and myself just tagged along, not being drinkers. Mack and James took the beer into class, the four of us sat in the back row of the little theater room, and Mack and James quietly drank their brews while the four of us enjoyed the hell out of Scorsese's earliest masterpiece. It was a perfect day.

Fast forward eight or nine years later. Mack and I had lost touch years ago. The whole world seemed to be on Facebook at the time, and I was getting pressure to sign up. I had little interest in joining Facebook until it dawned on me that maybe I could use Facebook to find Mack after all of these years. So, one night I joined and began my search. Before long I found Steve Mack, but not the way I had hoped to. What I found was a memorial page set up in honor of Mack. Steve killed himself the year before.

After coming to terms with his death, I vowed to never watch Mean Streets again. Every viewing reminded me of Mack, and I felt that somehow any future viewings would somehow dilute that memory, and I didn't want to take that risk. It took me a while, but I eventually realized that that was the exact opposite way I should think about Mean Streets and Mack. Now, every year on Mack's birthday, I sit back on my couch and watch Mean Streets, imagining my friend beside me. Only this time, I'm having a beer with him.
Posted by Patrick Bromley at 12:19 PM