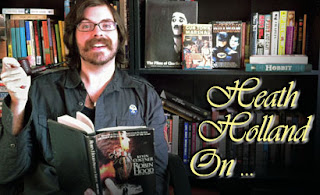 If you build it, they will come. And by "they," we’re talking about ghosts. Who you gonna call?

It’s happens around this time every year: the frost starts to melt, the trees and flowers start to bloom again, and I have to fire up the lawn mower for that painful first cut of the year. Winter is releasing its icy grip and the sun is teasing us with the faintest hint that soon we not only won’t need that thick winter coat. We might not even need long sleeves (or even pants!). Spring (not Winter) is coming. Of course, with Spring comes a whole new set of circumstances. Bees buzz and pollen covers EVERYTHING with a sickly yellow film that just screams “You’re gonna be washing your car…a LOT.” The threat of a bunny breaking into your house and leaving eggs and candy is statistically greater at this time of year. But with all that comes something wonderful. The all-American pastime. No, not competitive eating. I’m talking 'bout baseball.

I don’t know what it is about baseball. I can’t quote statistics, batting averages, RBIs, MVPs, FBIs, CIAs, AOLs or WTFs. There is no professional team in my city -- or even in my state -- so I didn’t grow up going to games. I live in far more of a football community than a baseball one. But when March comes each year, I find myself looking forward to the crack of the bat, the smell of the baseball glove…okay, and competitive eating.

Baseball has some sort of a hold on America. There’s that saying about apple pie, and I think it’s true. Baseball, somehow, is part of who we are. From the grandstands of the stadium to the backyard, playing a father/son game of catch, many of us have some sort of touchstone surrounding baseball.

And at around this time every year I want to watch Field of Dreams. It’s my favorite baseball movie, more than Major League, Bad News Bears, more even than the multiple Oscar winner Rookie of the Year. It’s a movie that exists almost solely for the purpose of sentimentality -- a sentimentality not just for baseball as it had been before any of us were born, but also of the cultural idea of what baseball stands for to so many people. If you break it down and think too much about it, you quickly realize that Field of Dreams is not a great movie. It doesn’t hold together or make much sense. But it does accomplish what it sets out to do, which is connect baseball to a feeling. You know me, I’m a sucker for a sappy movies. I get mushy at the end of Terminator 2. OF COURSE I love this movie. 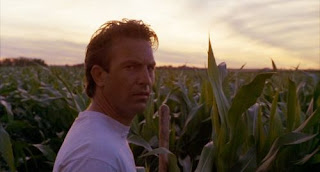 Kevin Costner stars as Ray Kinsella, a middle-aged ex-hippie who, along with his wife (played with zero restraint and near unbearable gusto by Amy Madigan), decide to move to the Iowa country and start a farm, complete with a huge corn field. One day, while walking in that corn, he hears a whispering voice that tells him “If you build it, he will come.” Build what? A baseball field, of course, complete with lights, fences, and some bleachers -- everything except a 19-year old selling those cheap plastic sticks that flash and make noise. The voice continues to communicate with Ray, urging him on his quest, and before you know it Ray has what appear to be the ghosts of dead baseball players batting and catching in his field, led by Ray “Pass-The-Cocaine” Liotta as Shoeless Joe Jackson. But that’s just the start. Before the credits roll, we’ve followed Ray on a road trip to find James Earl Jones, to Boston’s Fenway Park, to Minnesota looking for Burt Lancaster, and then back to Iowa for the Unrestful Dead World Series.

Where these baseball players come from, why they have not aged since their baseball-playing heyday (they aren’t old man ghosts), and where they go when they walk back into the corn is never explained. I don’t think the movie is interested in explaining that, nor do I think we’re supposed to dwell on the finer details and the “why” of the story. We’re supposed to blindly follow it (like Ray does) and go along with the story. And while the movie is playing, it totally works. It’s after you’ve wiped your eyes and gone to fix a hot dog that you start to ask these questions. The movie casts a spell, but the spell doesn’t last forever. It’s a sentimental candy bar, good for the moment but not for lasting satisfaction.

The acting, for the most part, is pretty good. Costner is in full “everyman” mode, and no matter what I watch him in, I feel like I’m seeing him as he really is. He’s a likable, believable dude, and that’s what this role requires of him. You don’t hire Costner for Shakespeare; you hire him for Midwest, salt of the earth roles. Similarly, Ray Liotta does his Ray Liotta thing. He’s always watchable and frequently seems to be on the cusp of being dangerous. Whatever you do, don’t look directly into his eyes for more than a few seconds. Gary Busey did that once, and you can see how that worked out.

James Earl Jones is awesome, as only Darth Vader can be. I like watching him because he always looks like he’s having fun. In fact, everyone in this movie seems like they barely knew the cameras were rolling. These days, I find that I have a much greater appreciation for actors that appear natural on screen and say their lines with effortless grace, like they could care less that they’re being captured on film for all eternity, than I do for people that chew scenery. I’m not going to call any actors out on that scenery chewing thing, but let’s say one of them rhymes with Hal Macino. Hooooo-ah!

Burt Lancaster is my favorite thing about this movie. He plays an old man who has long since left his boyhood baseball dreams behind him and become a real hero by saving lives as a country doctor. He’s wonderful; his performance is moving and subtly powerful. It speaks of a man who has found peace in realizing that life has taken him down wonderful but unexpected paths, leading to happiness he might never have found had his baseball career taken off. It’s the kind of performance that can only be given by someone who has lived a long and full life and can relay that experience and hard won wisdom in his performance. A few years after this movie, Burt Lancaster was gone.

The reason I like this movie more than any other baseball movie is because it’s not just about baseball. It’s not a romance set against the backdrop of baseball, or Rocky story of an aging athlete facing overwhelming odds. This movie resonates with me so well because it’s about family, and making the most of the time we have with the ones we love. 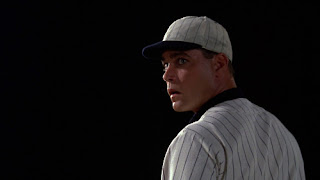 Interestingly, a trip to Wikipedia revealed that Ben Affleck and Matt Damon were in the crowd of spectators at the Boston Red Sox game shown in the movie. And that the field that Ray built in the movie had, until 2011, been owned by one man who allowed thousands and thousands of visitors each year to come see it without charging a dime for admission. His sole revenue stream from the field was from a souvenir shop on the property. He signed for it to be sold in 2011 to a company called “Go the Distance Baseball." There are plans to make the site even more of a tourist destination. I can’t say for certain, but I worry that the generous spirit that’s surrounded the site and allowed it to remain open and free for over two decades will soon be a thing of the past.
Next year, Field of Dreams will be 25 years old, but it has aged well. It still stands up as a great drama about America’s love affair with baseball and how the sport is woven into our fabric. It’s among the few sports movies that transcends being a movie about a game and becomes simply a good movie about people.

Do you have a favorite baseball movie? Is anyone else excited about the start of the season? Let’s discuss it below.
Posted by Patrick Bromley at 7:24 AM