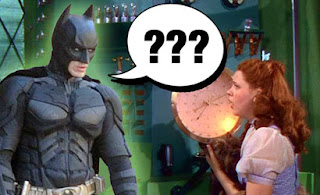 You've often cited Varsity Blues as being a "movie with everything." What are some other movies that have everything?

To help out the "readers" (no one is reading this), I'll define "everything" as good acting (that's right -- not great, just "good"!), some kick-ass action (can be substituted with excellent music), a compelling story, lots of laffs and female nudity. I realize the "nudity" requirement excludes a lot of older movies, so in THOSE instances, I weigh the other four factors more heavily (SCIENCE). Ergo, some movies that have everything include Airplane!, Boogie Nights, Starship Troopers, Fast Times at Ridgemont High, National Lampoon's Vacation, Femme Fatale and ... The General. Marion Mack gives me an antebellum boner.

Remakes are incredibly popular these days. If you were going to remake a movie -- let's say, for the sake of argument, Varsity Blues -- who would you cast?

Easy, Zac Efron. In every role. You know you love him.

Probably The Efficiency Expert. It was the first terrible movie I saw. I was fairly young, but I just knew it was bad, kind of like when you talk about seeing The Jewel of the Nile. I also remember having a really negative reaction to Teaching Mrs. Tingle when I saw it in the theater (with you!). Although it's probably not TERRIBLE (I don't remember much about it), I DO remember being utterly bored. Like, look-around-the-theater-for-something-to-distract-me bored. And that was probably the first time I experienced that sensation -- boredom -- in a theater on opening night (with you!). Let's round out the list, though, shall we? Squeaking in: The Happening, Battleship, 8MM and ... Blues Brothers 2000? Honestly, I'm having a hard time naming more than that. Sure, there are tons of bad movies, but either a.) I don't see them, b.) they have some quality I can kind of defend (e.g., Battlefield Earth ["Leverage!"], Showgirls [Spano!], Spice World ["Victoria!"], etc.), or c.) why kick a dead horse (e.g., Glitter)? If I think of any others that personally offend me, I'll list them in the comments.

I can remember going to see Varsity Blues with you more than once in the theater. What's the movie you've seen the most times in a theater? How many times was it? Can I borrow $20?

Honestly, the most times I've seen a movie in a movie theater is ... twice? Lame, I know. And there have only been a handful of times I've done this, including the 2009 Star Trek reboot (multiverse?) and Dead Man on Campus (because Zack Morris). There are probably a few others (if I think of them, I'll add them below). I just can't compete with you and Adam and JB! Part of me sincerely doesn't understand going to see the same film three (plus) times, both from a logistical and a financial point of view. I'm also a pleasure-delayer (ew), though, so I probably won't go see something in rapid succession, knowing that it'll make watching it on home video(?) that much more enjoyable in a few weeks/months. It's like reliving the first-time watching experience all over again! I'm weirdly afraid of ruining a good thing by going back to it too often. So, while I've definitely seen some movies dozens of times, I like to spread that shit around (double-ew).

As movie fans, we often feel like we should always be seeing new stuff. As a result, we don't always revisit movies we like as often as we should. If you had two hours to kill and could put on ANY movie, what's the first thing on your shelf you would reach for? Please say Varsity Blues.

You probably want me to say Varsity Blues, what with the closing part of your question explicitly stating, "Please say Varsity Blues." Well, jokes on you, pal! Because I don't OWN any shelves! But seriously, it's gotta be Crouching Tiger, Hidden Dragon. I'M KIDDING. It's The Tao of Steve. STILL KIDDING. The Curse of the Werewolf. KIDDING? Dogville. KIDDING. Dude, Where's My Car? SADLY NOT KIDDING. 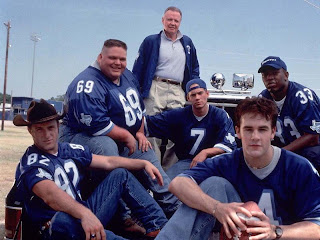 Posted by Patrick Bromley at 12:28 PM