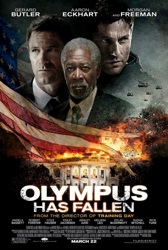 Olympus Has Fallen (aka Gerard Hard) did not have to be original. It did not have to being saying anything worthwhile. It just had to be a competent action movie and it is not. It’s a stupid, lazy piece of shit, and that’s why I’m taking the gloves off.

How hard is it to make a Die Hard knockoff? Answer: it’s not. It should be an impossible formula to mess up.  Gerard Hard messes it up royally.  It’s a symphony of bad acting, bad directing and bad writing. But possibly worth seeing????

The plot: Secret Service Agent Mike Banning (played by Gerard ‘unfrozen caveman’ Butler) is taken off the President of the United States’ (Aaron Eckhart) detail following a tragedy that opens the movie. 18 months pass, and our hero, Mike, is re-assigned to the Treasury Department looking tortured/bored. Things are not going well at home as Mike’s nurse wife (Radha Mitchell) apparently wants him to go to barbecues and buy coffee for the house. Mike recognizes his distance and food faux pas and offers to take his wife to a movie, which apparently is all she wanted because she then offers him an ocean sex honeymoon? (Quick sidebar: I want to meet this woman!). Mike goes to work, South Koreans visit the White House, North Koreans sneak in (because it’s all Korean to the White House), terrorism happens and the USA is at stake. Only Mike Banning (get it BANNING like he was BANNED from the President’s detail) can save the day. 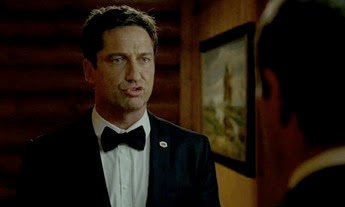 The movie has an impressive cast. Morgan Freeman is on hand. When I say he’s on hand, I truly mean it. He appears to be on the set of a much better White House movie and wandered into the wrong room. Melissa Leo (who makes the movie almost worth seeing by trying to give an Oscar-worthy portrayal of someone getting their ass kicked – I’ve never seen anything like it), Dylan McDermott Mulroney, Ashley Judd and her GREAT ASS, Cole ‘engine’s good’ Hauser, Tina Turner, Max Cherry/Cherry Bail Bonds. They’re all here and more wasted than ever! The chief villain is played by Rick Yune, who is hard to take seriously because his voice is half constipated man and half Kool-Aid man. You know -- the Meisner method! The most inspired acting in the movie comes from the extras playing the terrorist attack victims at the hospital. I’m not being glib. I could really tell they were in pain.

Let’s talk about Gerard Butler. I don’t like him. He may be a great guy, but he’s a dead zone of interest to watch onscreen. His character is clearly supposed to be the John McClane of the movie, but all he does is kill people and say ‘fuck.’ He says ‘fuck’ all the time! It’s like he knows six words, and the other five are ‘stab,’ ‘you,’ ‘in,’ ‘the’ and ‘head.’ How did he meet his wife? By saying, ‘fuck you in head?’ The margins are filled in by the usual bullshit, like he was the only guy to tell the Speaker of the House to fuck off (YEAH!) and he plays poker with the guys because he’s a guy’s guy (DOUBLE YEAH!). The most egregious thing about Butler’s performance is that he had total control over it. He produced this movie, too! And for some reason almost all of his scenes take place in dark rooms where it’s at times impossible to discern what is happening. I have two theories for why this is: a) Fuqua can’t direct action (more on that later) and it’s a shortcut, or b) Butler’s star is so bright that we can’t look at him for long periods of time without a veil of protection. I will say, though, one bit of character development worked. I really wanted to know what movie him and his wife were going to see. Even when hundreds of Americans were killed or injured by those pesky terrorists, I was always thinking "Hmm, Argo? Lincoln? Identity Thief?" 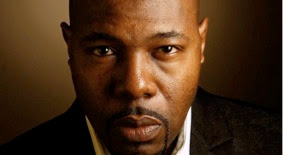 Now, about that bad directing. I am not a hater of the co-producer/director Antoine Fuqua.* Training Day is very good, and Brooklyn’s Finest is underrated. Here, though, he does the work of a hack. The movie gives the audience no build up or sense of pacing. There are many scenes that just start unfolding and you’re sitting there like ‘What, this is the boss fight?’ so you have no reaction to what’s happening except momentary confusion. For an action movie, it is embarrassingly shot. It’s one of those movies where someone gets hit in the stomach and the camera pans to a side close-up of the stomach while we quick cut miss the takedown move of the fight. The special effects (mostly of military aircraft) look like something from a demo screen of a Playstation 1 game. Sigh. Why are so many action directors terrible at shooting action? Does anyone have a suggestion of a glossary term for a movie where the action is poorly staged and shot? I need a shorthand for this.

Gerard Hard is chock full of annoying action clichés and idiosyncrasies. Thank goodness there’s no Uranium/Plutonium (Gerard Butler is weapons-grade enough as it is) or Euro tracksuits. Wait a second -- there’s fucking nuclear bombs in this movie. Dammit. That just shows you how ineffectual the events of this movie are. I forgot the threat of nuclear warfare. The movie also has a habit of telling you what room you’re in and what time it is (in screen text), which has no effect on the movie whatsoever. I don’t care if he is in the Lincoln Bedroom and it is 11:56PM.

Gerard Hard ushers in some of my other least favorite action clichés – control rooms and code words. I can’t stand control rooms in most movies, and this one’s a doozy. The crux of the Morgan Freeman arc takes place in a government control room that holds about 50 people and only 5 of them appear to be working. Imagine if you also worked at that office and needed a room for 50 people. You would be pissed. They could have done all of this in a much smaller conference room. Did they just need the big board? At one point, Morgan Freeman orders a very specific cup of coffee – half and half, three sugars and not in a Styrofoam cup, but in a real mug. He never gets it. The movie even fucks that up!  The onscreen time reminders were fun in this case, though, because I wondered how long it would take for Morgan to get his cup of coffee. Code word phrases like "Mustang. This is Big Top. Bringing out the full package" are uttered. How obvious is that? Spice it up a little, like "Abey Baby, this is pulled pork waffle fries. Bringing out Mama G and her rice pudding." No one will know what you are talking about – hence, code.

As for dialogue (other than code words), there are some real gems here. I’m paraphrasing, but they say "The United States doesn’t negotiate with terrorists," which I wish were untrue so I don’t have to hear that line ever again. After the opening siege of the White House, a character says something like "They’ve taken the White House."  I KNOW! I’ve been watching it for 15 freaking minutes! The best is the bonding scene given between The President and his son. It’s about ice cream. Because all Dads only bond with their sons over chocolate chip or rocky road. As long as Dad doesn’t eat all the rocky road! Because har har har. I love my Dad. He’s one of my closest friends. We talk almost daily and we’ve never in 30 years had the ice cream talk. I’m sad now. 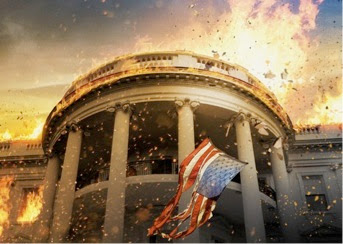 The movie is very America FUCK YEAH, often to hilarious results. We get the standard frayed American flag that drops off the White House in slow motion. This is how we know the terrorists have gone too far -- not all the killing, but the slo-mo. I can take most things, but a flag hitting the ground is where I draw the line. The first end credit, "Directed by Antoine Fuqua," is over an American flag flapping in the wind, all shiny and new. The great part about it is that it’s just his credit. The flag goes away right after that. I half expected Spider-Man to fling onto it.

As evidenced by that example, Gerard Hard is very much a post-9/11 cartoon. I find this fascinating, because we haven’t had this for many years. Apparently, we can go back to the '90s mindset and not take any of this seriously anymore. The amazing thing is I was game for that. Lastly, I really dug the (mild spoiier) American traitor’s justification for why he sold out. He answers the President "Globalization…fucking Wall Street." Couldn’t have said it worse myself. Did he get two bullet points off a Powerpoint slide and go "Yeah, that’s what I’m mad about"?

In conclusion, I want you to see Gerard Hard so I have more people to make fun of it with – Adam Riske, F This Movie!

But seriously, this one is pretty terrible. It’s like a bad Air Force One, and that one wasn’t very good either. At times, Gerard Hard is so bad it’s good because you can laugh at how stupid it is; more often, it’s just tedious. I hope no one that is about to take their U.S. citizenship exam sees this movie and changes their mind. We’re a lot better than we’re shown in this movie.

A much better movie opened this weekend. It’s called Spring Breakers. It’s subversive, crazy and original. And it has something important to say. Go see that movie. Or just wait for White House Down which is the same movie but with more promise and comes out in June.

*Gerard Hard is being advertised as "From the director of Training Day." This is a true statement, but I want to have a statute of limitations on how long you can boast about a past success. That was 12 years ago, Antoine. The promotion should say "From the director of Shooter and Brooklyn’s Finest" to give us audiences a better idea of the track record.
Posted by Patrick Bromley at 7:55 AM