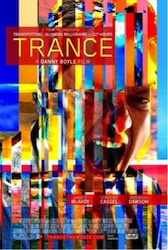 Rosario Dawson's vagina is the first thing people will remember about Trance. That's the bed the movie has made. It is a movie that you’d be just fine watching, yet lose nothing by skipping. The good news is that it’s original.

I have never seen another movie quite like Trance, which is interesting because it’s almost a mash-up of greatest hits from The Thomas Crown Affair, Eternal Sunshine of the Spotless Mind, Sleeping with the Enemy and every film noir you’ve ever seen. It’s a mess, but an entertaining mess. The bad news is how clumsily the movie comes together. At the end of the day, Trance is like watching a Danny Boyle guitar solo, where the solo is more important than the song. It’s exciting in the moment, but by the end the creator is dripping with flop sweat.

The plot in brief: Simon (James McAvoy) is an art gallery auctioneer who is assaulted by Franck (Vincent Cassel) and his crew of thieves during a botched robbery of a priceless Goya painting. Simon stashes the painting during the robbery, but the assault leads to him having amnesia. Once Simon comes to, Franck re-enters the picture demanding the location of the painting. With Simon unable to remember, the thieves employ a hypnotherapist named Elizabeth (Rosario Dawson) to dig into Simon’s subconscious and make him remember where he hid the Goya. And then come the twists.

Trance is very much a puzzle movie, similar to Side Effects from a couple of months ago. Both movies also deal with amnesia (on the basis of these two movies, it’s a condition one of every three people have). I think I like them both about the same. Whereas Side Effects decides to become a pedestrian thriller instead of a great drama, Trance has no other option than to be a souped-up heist movie. It’s a style-over-substance movie for sure, albeit one that is ambitious in its execution. 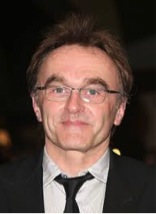 One of the pleasures of Trance is that director Danny Boyle is so skilled at making a professional production that he can riff and keep you off-kilter. The twists the movie takes are truly surprising. Like all other Boyle movies, Trance looks incredible, the music is good and he elicits engaging performances from his cast. James McAvoy has become a really interesting actor. He looks like a boy, but I admire his range and willingness to use that exterior to subvert expectations. I never thought I’d say this, but I’ve become a fan of Vincent Cassel. He’s so peculiar, like a French Christopher Walken. Rosario Dawson is not as effortless as her two counterparts, but she’s good in the movie and given the most difficult of the three acting assignments. And, if you were curious – Full Spano. You see her AMC Stubs card. It’s kind of amazing how integral Rosario Dawson’s vagina is to this movie. I’m not being gross; if you see the movie, you’ll know what I mean. 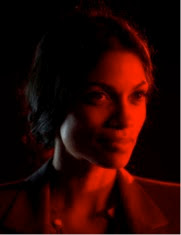 Trance begins better than it ends. The first 45 minutes are really great because it’s establishing a story with rules. Once the hypnosis really kicks in, everything goes off the rails. After the first act and a half, we get the vagina deep dive, a lot of hallucinations and some awfully long scenes with characters explaining what is really happening in the plot because there’s no way a viewer can figure out any of the developments for themselves. The last scene of the movie is truly ridiculous as it tries to become this statement on memory and the memories we choose to suppress or remember. Boyle has a habit of doing this. He makes movies that mean very little outside of the straight text of the movie, but he tries to imbue them with a deeper resonance not supported by the movie you are watching. 127 Hours is a great example.

The hypnosis aspects don't work because they're too manipulative. Boyle uses them for a whole slew of narrative shortcuts. He does whatever he wants, even if it defies the movie’s internal logic. How much you love or hate Trance depends on whether or not you are willing to go along with it. 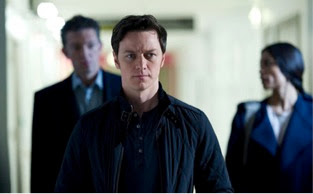 Complaints aside, I had an overall decent time during Trance. If you’re a fan of Danny Boyle or noir, I would recommend checking it out. The filmmakers are not playing it safe. It’s very R-rated and it feels like the work of crazy people. I was definitely entertained, even if I’m left with a movie that's sum is not equal to its parts. When it gets to where it's going, I wondered if it was worth the effort. Maybe less would have been more. Trance is such a mixed bag.
Posted by Patrick Bromley at 11:15 AM