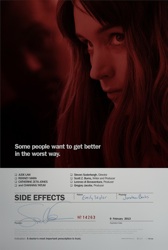 Side Effects is worth seeing. Not by a long shot, but just barely.

If you like when a movie is “clever,” you will probably really like Side Effects. I would rather see a movie that has the courage of its own story convictions, and this is where Side Effects cops out. This is a Drama hyped up to be a Thriller. I still want to see the Drama version of this story, and the sad thing is, Side Effects is the Drama for the first 45 minutes or so. But, still, there is a lot to admire about the movie. Sound like I’m going back and forth? That’s because I am. It’s a frustrating movie. I’m very aware of its flaws, but it won’t leave my head right now. It’s a good Saturday night date movie where something more lasting should be.

My negative criticism (a substantial one) rests solely on the storyline: Side Effects starts as a medical drama and a character piece and then twists and twists and twists again. Once you stop thinking it will twist any more, there’s another twist. In the third act, there was a period of about five minutes where I had no idea what the hell was going on, and, by the end, I had a ‘how did we end up here from where we started?’ feeling. The clearest example I can recall of having this previously is The Matrix Revolutions. That is a bad thing. 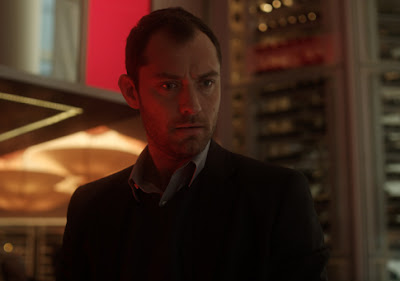 This being a "pretzel" movie, I will barely cover the plot: the Taylors, Martin and Emily (Channing Tatum and Rooney Mara) are a young, upscale couple trying to get back on their feet after Martin is released from a four-year stint in prison. Outside of the pressures that causes, the situation is made worse by Emily’s struggles with depression. Emily finds her way in the care of psychiatrist Dr. Jonathan Banks (Jude Law), and her sessions, combined with medication, lead to troubling behavior and actions. Emily’s former psychiatrist, Dr. Victoria Siebert (Catherine Zeta-Jones, who is made up to look like a girl in a Robert Palmer video who became a doctor because there are no longer Robert Palmer videos), also factors into the plot.

Ok, now for the good: Zeta-Jones aside (who seems too vampy here), the acting here is way above the E-Quaid-Er (i.e. it is better than Dennis Quaid, thus is good and helps the movie). This is really a four character piece, with Jude Law (+1 'Buv Quaider) and Rooney Mara (+4 'Buv Quaider…the second highest Buv Quaider) factoring in the most. Channing Tatum (+2 'Buv Quaider) continues his good and deserved fortune with this movie. His role is underwritten, but Tatum is in the zone right now and he exudes a movie star presence and, dare I say, a GRRRRRRRAVITTTTAS that gives his character more weight than it would from a lesser star. I'm almost bummed by Steven Soderbergh’s promised retirement, because it means no more Tatum collaborations. Soderbergh uses him very well, arguably better than Scorsese uses Leonardo DiCaprio by comparison. Jude Law has become such a dependable actor that I often take him for granted; he can play just about anything and has grown less flashy and more at the service of the story over time.*

The real star here, though, is Rooney Mara.  It’s kind of a shock that this is the same girl from that dull-as-dishwater remake of A Nightmare on Elm Street. She has grown into one of my favorite actresses because she’s really interesting. She is at times beautiful and at others gaunt; sometimes threatening and also vulnerable. Kudos to Mara for choosing to work with well-regarded directors like Soderbergh and David Fincher. This quality control will serve her well in the future. My only hope is that she mixes in some lighter performances soon, so as to avoid being typecast. I think she can do just about anything. 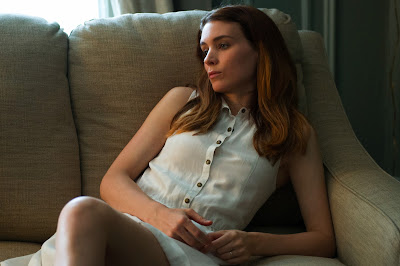 Soderbergh, Soderbergh, Soderbergh. I have to mention him. This is his “retirement” movie, which I don’t really believe at all, but if he says so, ok. I am a fan of his work. I don’t love all of his movies, but he has made some great ones (Out of Sight, Traffic, Ocean’s Eleven, Bubble, The Informant!) and some very good ones as well (Erin Brockovich, The Girlfriend Experience, Contagion, Magic Mike).  The best thing I can say about his work in Side Effects is that he’s such a confident, assured director that even as I was being manipulated, I was never pissed off. That is no easy trick to pull off. His photography is once again just beautiful; he really knows how to make shooting on digital look appealing. It’s nice to see upscale shot well. The score, by Thomas Newman, works well, too, when the thriller elements kick in.

Side Effects deals with themes Soderbergh has been honed into for a while (e.g. money), but I wish he didn’t go that route here. Within the movie is a really good drama about the depressed, the treatment of depression and the psychiatrists treating those people. I would have loved to have seen a director as good as Soderbergh study that in this movie. He’s got the right actress in Rooney Mara. Oh well. That is not what was made.

Go see Side Effects if for no other reason than to see some great acting shot extremely well. It won’t leave my head in the hours since I’ve seen it, but I don’t think I would leave it on if I stumbled upon it on cable in a few years.

Without spoiling, what did you think of Side Effects?

Notes:
A month and change into 2013, and Hansel and Gretel: Witch Hunters is my favorite movie of the year. This is a reflection of how f-ing great Hansel and Gretel is (just fun, fun, fun) and how bad 2013 has started out.

*Speaking of ‘he can play just about anything,’ I want Jude Law to star in a remake of Jaws with Jennifer Lawrence. Why? Because then you could put on a poster ‘JLAW, JLAW…JAWS!’  Ok, bad joke. Please continue to read my future columns.
Posted by Patrick Bromley at 7:39 AM