Review: The ABCs of Death 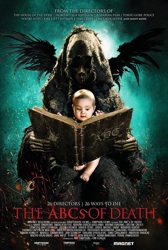 I'm having a tough time reconciling my feelings about the new horror anthology The ABCs of Death. I do not think it's a very good movie. At times, it's almost stunningly bad. And yet I think it's kind of worth seeing -- provided you have a strong stomach and a high threshold for nonsense.

The premise is very simple: 26 different filmmakers each received a letter of the alphabet and $5,000 to film whatever they wanted. The only rule is that they choose a word, and that that word be used to illustrate some way that a person can be killed. I could get "K" and choose "knife," then spend five or six minutes building up to some elaborate and graphic stabbing.

None of the choices in the movie are quite so pedestrian. Maybe some of them should have been.

Things start off well enough -- so well, in fact, that the first segment, by Nacho Vigalando, is the best in the entire movie (a problem also suffered by last year's indie-horror anthology, V/H/S). The fact that it's all downhill after that -- and that there are TWENTY-FIVE more short films -- does not bode well for the quality of the movie. But it offers everything we might want from a horror short: it tells a little story, it showcases some shocking violence and it has a neat twist. I won't suggest that every entry in The ABCs of Death should resemble "A" -- the structure would grow repetitive very quickly -- but the fact that so few of the contributors seem to understand what works the way that Vigalando does came as a bit of a shock.

What's worse is that the sameness settles in anyway, just not in the context of clever and interesting short films. It's unavoidable, really, because it's built into the structure of the movie: every segment is just building up to a violent demise. The whole thing amounts to a hipper, more modern Faces of Death. There can be little drama when we already know how every single segment is going to end. I won't even give away what the letters stand for, because often times it serves as the punchline to a given sequence. 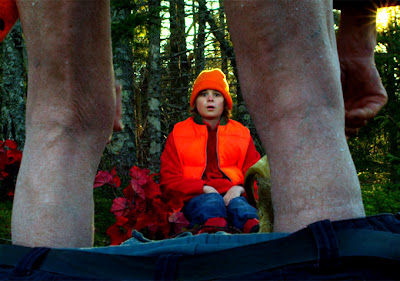 To call The ABCs of Death a mixed bag would be a lie, because it's mostly bad with just a few flashes of inspiration. And, yet, there's still something that's kind of interesting about it. Maybe it's the novelty. Maybe it's the opportunity to see 26 different filmmakers approach the same subject in vastly, VASTLY different ways. Few of them are all that successful. Jason Eisner continues with the same aesthetic he established in Hobo With a Shotgun, but his entry (for the letter "Y") is childish and ugly for the sake of ugliness. Noburo Iguchi, director of The Machine Girl and Dead Sushi as well as a bunch of Japanese porn movies (classics like Busty Costume Play Investigator and Beautiful Girl on the Toilet 2: Secret Excrement), is clearly channeling Nobuhiko Obayashi's classic Hausu with his entry for "F" (spoilers -- "F" is for "fart"), but appears to understand only the weirdness, not the beauty. Also, I like Ti West a lot, but his entry in this movie really needs to fuck off.

Some filmmakers were smart enough to make their entries feel like pieces of a much larger story -- there is a movie that exists outside of the five minutes we spend in that world. Timo Tjahjanto's "L" lands us in the middle of some demented contest; how it began or what its goals are are never explained. Yes, it's repellent and ultimately pretty stupid, but at least demonstrates some ingenuity. Better is comic book artist Karre Andrews' "V," a sci-fi piece that exists inside of a much, much bigger universe with a scope and scale way beyond the $5,000 budget.

The best entries are the ones that change things up enough to stand out. Lee Hardcastle's "T" segment (which is only in the movie because he won a contest) is done entirely in stop-motion animation. "U," directed by Ben Wheatley (who made Kill List), is all told as one extended POV shot; while the story isn't any great shakes, it's technically impressive. The "X" segment is one of the strongest, and features one of the most awful and disturbing images I've ever seen in a horror movie. No surprise that it's directed by Xavier Gens, director of Frontier(s) and part of the French extremist horror movement. 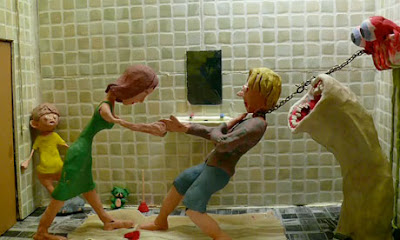 Then there are segments like Jorge Michael Grau's "I," which is easily the most horrible and unpleasant sequence in the movie. Whereas the majority of the entries lean towards gallows humor (or, in the case of someone like Adam Wingard, outright comedy), Grau's simply presents awful things and then gets worse. It feels even more distasteful situated, as it is, alongside so many shorts that go for gory black comedy, but that's not Grau's fault. He didn't know that most of the submissions would not attempt to be genuinely horrific, so he can't be blamed for the fact that his short is even more vile in the context of the entire movie. Does any of this make his entry better? Not really, but there's something interesting about the conflicting mixture of tones. And at least it caused a reaction. Most of the shorts are forgettable.

I tend to like horror anthologies because of their economy and because they offer a lot of different things inside of one, hopefully complete package. There are very few good ones, however, and The ABCs of Death does little to change that. It had the potential to be even more interesting than most, seeing as it involves a whopping 26 filmmakers and a number of languages and cultures that inform the segments. It's disappointing that most of the directors just used the opportunity to be as juvenile as possible, but I guess it's a pretty juvenile idea for a movie. Maybe it's exactly what it should be. In that case, I guess it's just my fault for not liking it.

So the movie is not very good. But so few horror movies are this willing to be so gross and irresponsible -- to revel in the basest elements of the genre -- that I almost think it's worth seeing as a curiosity. It's a gimmick movie that rarely transcends its gimmick, but, as a horror movie fan, there are things in it to be talked about. In most cases, that boils down to "Well, that was stupid." But every once in a while, a Japanese woman will shoot vegetables out of her vagina, and you'll think "I've never seen that in a movie before."

The ABCs of Death is currently available via VOD and will receive a limited theatrical release through Drafthouse Films beginning March 8th.
Posted by Patrick Bromley at 7:36 AM