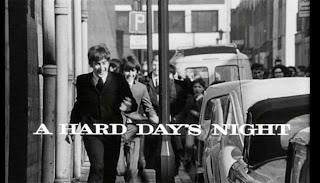 The opening sequence to A Hard Day's Night is one of the most iconic in film history. From the moment George strums that Fadd9 (huh?) chord, you know you're in for something special. But does the movie live up to the promise of those frenetic introductory scenes, or does it suffer from a bout of Apocalypse Now Syndrome? That's a question better addressed in Patrick and JB's recent podcast. I'm just here to humblebrag about my recent vacation.

Last February, I visited London for the very first time (weirdly enough, Bob IS my uncle [pip, pip!]). While I can't compete with JB (seriously, guy wins a Beatles-themed trivia contest, has a dedicated Beatles bathroom and once camped in the the forest where Heather Mills got her leg), I do consider myself a pretty big fan. I love the group (like every other American), I grew up listening to their songs and I made it a point to seek out Beatle locations while visiting England. Also, if you don't already know, my wife is the best. She's also a big Beatles fan (it's how we originally bonded [in addition to watching Wet Hot American Summer]), and was eager to join me as we canvassed several neighborhoods in search of Fab Four landmarks.

Many scenes (too many?) in A Hard Day's Night take place inside hotel rooms or other nondescript interiors (e.g., sets built on the Twickenham Studios lot). Likewise, there are a few exteriors that are equally unremarkable (e.g., the "Can't Buy Me Love" sequence, shot at Gatwick Airport). This means that finding identifiable locations nearly 50 years after the film came out is increasingly difficult.

Thankfully, some of these locations still exist.

The aforementioned opening sequence was meant to be Liverpool's famous Lime Street Station. It was actually filmed in London at Marylebone Station. 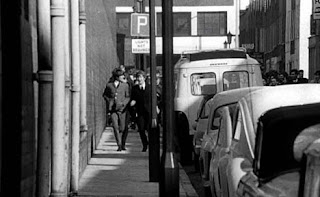 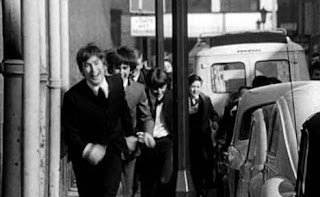 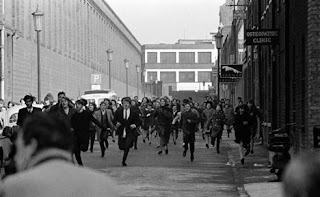 Sure, it might be a LITTLE embarrassing to recreate this sequence. Alone. But hey, I'm the guy who also ran across the Oberbaumbr¸cke (Oberbaum Bridge) after seeing Run Lola Run. Also alone! Pictures forthcoming? 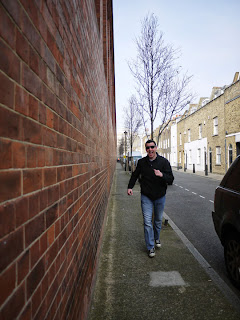 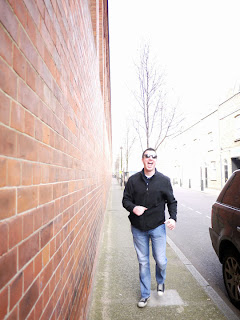 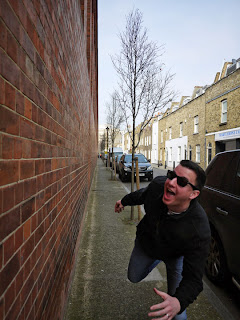 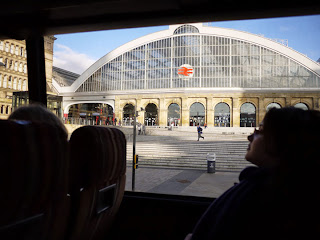 Note: that girl in the foreground is not Yoko Ono.

Here's a phone booth! Just like in A Hard Day's Night! 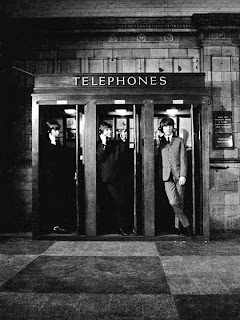 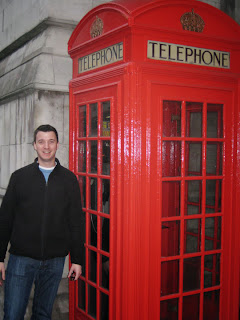 "Look, mum! I'm talking on me telly-phone!" This is just to prove that I was in London.

While there are some scenes in which the train moves ... 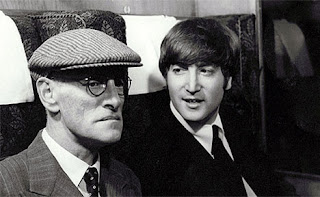 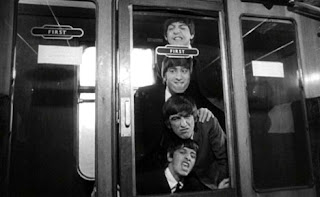 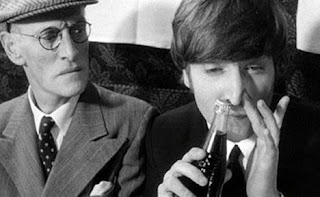 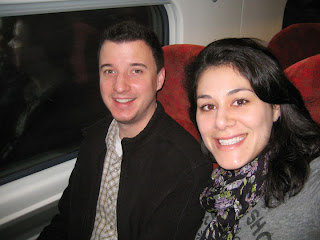 Its final destination is also (wait for it) ... Marylebone Station. BTW, that's me and my wife taking a Virgin train (not after we were done with it) to Liverpool (only about three hours away by rail). 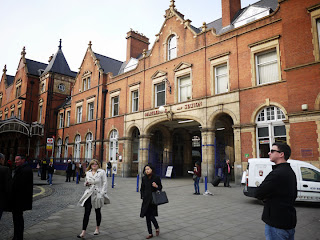 Here's me taking in the station's exterior. Note: those girls walking out are not the Beatles.

I hate to say it, but those are probably the most recognizable existing locations in A Hard Day's Night (I didn't get around to a tour of Twickenham Studios, nor do they even still have any of the old Beatles sets).

BUT, if you're still interested in seeing some historic Beatle locations throughout London and Liverpool, READ ON!

Disclaimer: the rest of this post has very little [read: nothing] to do with movies. As if the first section was a real cinematic home run (it was not).

Here we are walking across Abbey Road, just like the Beatles! And every other tourist over the last 50 years! 28 IF! 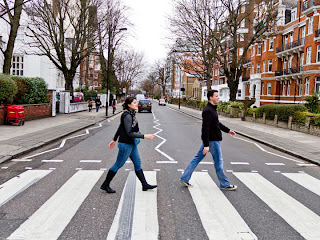 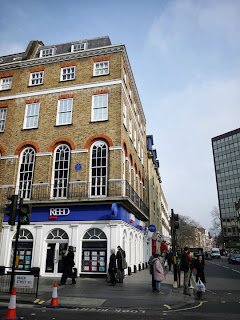 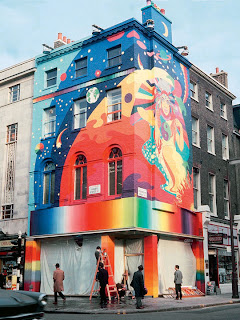 Here we are standing by a Penny Lane sign in Liverpool. Four of fish and finger pies! Uh, Beatles much? 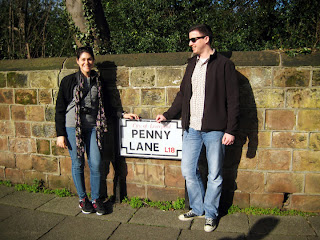 Strawberry Fields! We buried Paul! You should know that we did NOT add graffiti to the gate, because WE are NOT assholes! 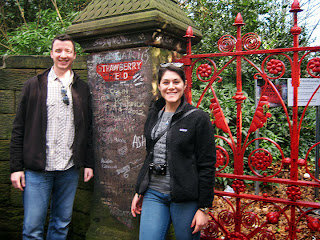 Here I am sitting in the same booth used by the pre-fame Beatles at a bar called The Grapes in Liverpool. Notice the inset in the photo. Pete Best drank here! Now you are the most jealous! 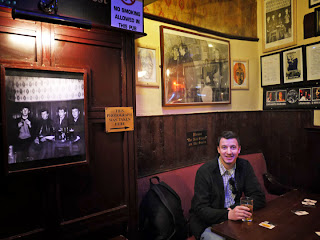 John's boyhood home, Mendips! Fact: he was a Beatle! 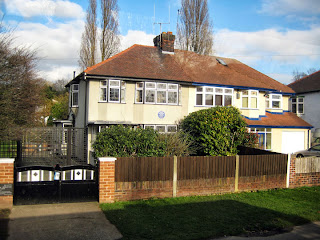 Me in front of a replica Cavern Club set inside The Beatles Story museum in Liverpool. Sure, it's cheesy, but when you get to Liverpool via train at 6 a.m. and you've got FIVE HOURS to kill before a bus tour, whaddya gonna do? 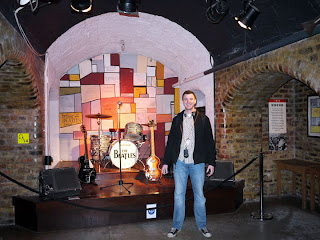 Our tour bus! You can tell they took exactly .0003 seconds to come up with their name. 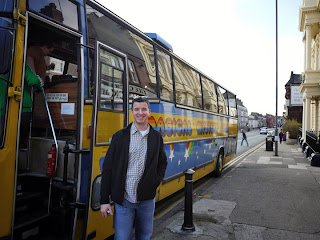 Me and ... John? George? Gerry sans Pacemakers? Having a friendly BEATLE-RELATED chat outside the site of the REAL Cavern Club. I was all, "I love Rubber Soul!" And he was all, "Oil can!" 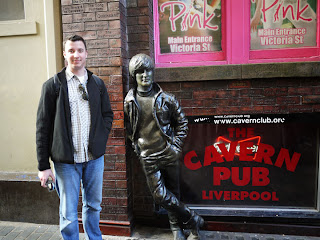 All the lonely people, where do they all come from? Fact: this isn't the real tombstone of Eleanor Rigby. That was in the museum annex. 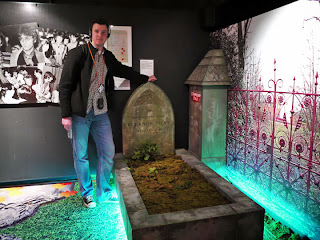 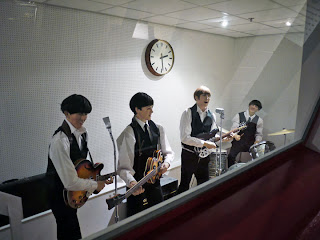 Hope you enjoyed looking at my pictures! Sure, it was just like one of those boring, post-vacation slide shows in your neighbors' living room in the '80s. Only here, you have the option to close the tab! Thanks for reading! Rock 'n' roll-sploitation!
Posted by Patrick Bromley at 3:11 PM