The Bling Ring is a terrific movie and well worth seeking out. It has big ideas and something worthwhile to say about “the worst generation.” There is a lot of blame to go around – parents, dime-store philosophies, reality television, TMZ and other gossip rags, etc. The brilliance of The Bling Ring is that it’s done in a way that’s very funny and entertaining. It’s not at all heavy-handed. You’re in the thieves' shoes. You get the big party.

The plot in brief: inspired by actual events, a group of fame-obsessed teenagers use the internet to track celebrities' whereabouts in order to rob their homes.

This movie tackles familiar territory for writer-director Sofia Coppola about celebrity, frivolity and decadence, but the difference this time is that its protagonists are from the outside looking in. Except in their brains they are in. This is one of the brilliant parts of the movie. The little nitwits Rebecca (Katie Cheng), Marc (Israel Broussard), Nicki (Emma Watson), Sam (Taissa Farmiga) and Chloe (Claire Julien) think they are already celebrities  -- the shot from the poster is in the movie, where the characters walk in slo-mo to hip hop music. They stay out late and party in the same clubs as their “peers” like Paris Hilton, they rob them with the casualness of borrowing a pen (in this case it’s designer clothes, jewelry, money and cocaine) and the group all perform at each other like they are the stars of their own reality show and their peers are all the co-stars. There is no real friendship going on here. At one point, a character even gushes that they accept every friend request they have on Facebook and they’re flattered to have their own fan page. Quantity over quality is what’s important. Brands don’t have friends. 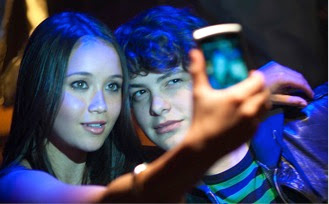 The Bling Ring has the disadvantage of coming after Spring Breakers, but the two movies are about different kinds of teens behaving badly. Where Spring Breakers brilliantly depicted teenagers that wanted to be gangstas, The Bling Ring’s teens don’t care about the rush of the crime. They want the loot and the bragging rights. Both movies are similar in that their protagonists want to take EVERY shortcut to getting what they want. Both movies feature characters that only live in the moment with no consideration for their futures or the consequences involved with their actions. The Bling Ring crew are delusional sociopaths and Sofia Coppola puts us in their shoes (the director is an expert in empathizing with her characters). She doesn’t need to satirize them; playing it straight without editorializing is making fun of them enough. They look up to Paris Hilton and Lindsay Lohan, who are partly famous for being in homemade sex tapes, going to jail and having constant drug and alcohol problems. To the characters in The Bling Ring, going to jail is nothing to be embarrassed about. It’s part of the show. In fact it’s more coverage, like sweeps week. There’s a scene where the Emma Watson character talks about how surprised she was to learn that Lindsay Lohan was in a cell nearby her own while she was in jail. The Watson character gets off on that –- Lohan was a guest star on the Nicki Show. How cool is that?

There are a handful of shots in The Bling Ring’s short 90 minute runtime that are OMG great. The first is a shot of the group excitedly running down the driveway of one of their marks, in the shadows with bags in tow of stolen goods. Just like the shot in Spring Breakers in which Vanessa Hudgens and Ashley Benson are seen watching cartoons, the shot in The Bling Ring reminds you of children trick or treating. The other one that comes to mind is an unbelievable medium shot from the hills, giving a full view into the layout of Audrina Patridge’s home as Rebecca and Marc go room to room stealing items like they’re racking up points in a video game. The movie was shot by two cinematographers originally: Harris Savides (who died during production) and Christopher Blauvelt. It’s great work. 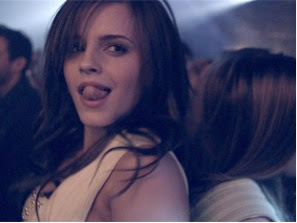 The performances are strong across the board. Katie Cheng is cool and detached as the ringleader Rebecca, but gives the character a valley girl shrug that disarms you until you realize how evil she is. Israel Broussard is the most sympathetic of the group, a closeted (to most) homosexual teen that desperately wants to be popular by any means. Leslie Mann has a very amusing supporting role as the quack mother of Emma Watson and Taissa Farmiga, peppering out karmic word salad from Rhonda Byrne’s The Secret like it’s a personal bible and sitting the kids down for exercises like speaking to a poster board of Angelina Jolie to discuss "what we like about her." But the real standout is Emma Watson. She’s always been an actress I’ve liked, but she’s trying something new here. At first I was wincing at how broad her characterization of Nicki was, but then you realize it’s a very brave and out-there comedic performance.

In ranking this among Coppola’s other work, I would say it comes third after Lost in Translation and The Virgin Suicides. Like Quentin Tarantino, Sofia Coppola has a perfect track record so far. In a summer of fluff, The Bling Ring feels like an oasis in the desert. It’s able to entertain and have some meat to it, all done with great performance and style. It’s one of my favorite movies of the year.

Note: If the movie was not inspired by a true story, I would never believe these kids could break into the homes of Paris Hilton, Audrina Patridge, Rachel Bilson, Lindsay Lohan and Orlando Bloom with the ease that they do. Who leaves a key under the mat of their front entrance, has no security guards and leaves sliding glass patio doors unlocked? Apparently most people in Los Angeles.
Posted by Patrick Bromley at 12:06 PM