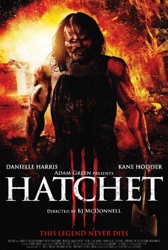 The third time is rarely the charm.

Three movies in, the Hatchet series is just too played out. The first film gathered a following on the conceit that it was a throwback to '80s-style slasher movies, filled with gratuitous nudity and gore and executed with practical makeup effects. The sequel's hook was that it expanded the mythology of its iconic killer Victor Crowley, filling in elaborate backstory and upping the body count. Hatchet III's hook appears to be that it isn't directed by Adam Green.

Yes, after writing and directing the first two movies in the franchise, Green has handed the reins to BJ McDonnell, the camera operator on Hatchet II (plus Jack Reacher, The Lords of Salem and a bunch of other movies) making his directing debut. The result is a movie that looks slightly better than the two before it but which still has no personality of its own; McDonnell's idea of a contribution is a 90-second visual quote of Predator -- a reference for its own sake. 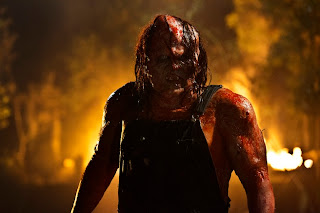 Green still wrote the screenplay, so the movie has the same jokey tone as the rest of the series, only now most of the humor is purely referential. Hatchet III's idea of cleverness is just to be self-aware. When a character complains of convoluted backstory, we cut to Adam Green (in his third consecutive cameo as a drunken asshole) looking offended. Get it? Because he WROTE the convoluted backstory! When another character launches into the legend of Victor Crowley for the umpteenth time, he is interrupted and cut off. Ok, sure. We've all seen Gremlins 2, too. This is a movie only a devoted fan could like, and even they aren't given much to work with.

The only other real addition to the series is that it makes explicit the fact that Victor Crowley cannot be killed, courtesy of some dialogue explaining he is a kind of repeating ghost that reforms every night, no matter what damage is done to him. Well, no shit. We might have figured that out when he came back from the dead in Hatchet II. Or again at the start of Hatchet III. Telling us he can't be killed isn't really necessary when we've already seen that he is impossible to kill.

Picking up seconds after Hatchet II ends, III  opens with Marybeth (returning Danielle Harris) killing the murderous, deformed Victor Crowley (Kane Hodder) a couple more times, then showing up at the police station to tell the authorities what happened only to find herself arrested for Crowley's murders. While the town sheriff (Zach Galligan) and a S.W.A.T. team led by the dickish Hawes (Derek Mears) heads into the swamp to investigate, Marybeth is grilled by a journalist (Caroline Williams), a self-proclaimed Victor Crowley expert who believes she knows how to take down the killer once and for all.

While the third film boasts a bigger cast than ever before, all it means is a higher body count. There isn't a single character with whom we can identify or sympathize. The first film had Joel David Moore recovering from a heartbreak, so we invested in his character even before people started dying. The sequel saw Marybeth -- a character in whom we were already invested because of what she endured in the first movie -- trying to protect her family and discover the truth of her father's part in the Crowley legend. Hatchet III throws Marybeth in a jail cell and then the back of a squad car, removing her of any agency as yet more characters refuse to listen to her. She's a non-factor in the movie. The closest we get to a sympathetic character in her place is Caroline Williams, the former star of the great Texas Chainsaw Massacre Part 2 and just one of several examples of stunt casting in the film. She's fine in the role but hardly likeable. No one is. 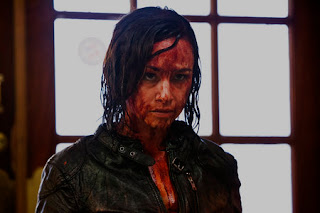 Maybe I'm getting too old or too sensitive, but I've grown less tolerant of horror films with no moral center. Every character in Hatchet III exists to be brutally murdered. The ones who are boorish, know-it-all assholes who neither fear nor respect the danger of Victor Crowley are brutally murdered. The ones who try to do the right thing are brutally murdered. There is no distinction: everyone has to die. And they no longer die in particularly interesting ways, either. The Hatchet series has defined itself as a kind of practical effects demo reel. The first movie had several "holy shit" moments of gore (I'm thinking of the fates of both Patrika Darbo and Joleigh Fiorvanti). The sequel had at least one (Tony Todd). For as goopy and bloody as Hatchet III is, it demonstrates a real lack of imagination in the "kill" department: victims are either torn apart or smashed to a red pulp. The jokey tone of the movie and the over-the-top nature of the brutality keep things from being too gross, of course, but the effects appear to have gotten much worse, too. Even a former hallmark of the series has slipped away by part III.

If Green's goal was always to pay tribute to the Friday the 13ths of the world -- the kind of generically violent slasher movies that defined the '80s -- then perhaps Hatchet III is exactly what he intended it to be. It's the same type of repetitive, diminished-returns sequel that dragged every '80s franchise into the ground. It feels like an imitation of something that was already something of an imitation to begin with -- a shadow of a shadow.

I still like Adam Green, and want to see good things from him. He's a guy who loves horror, and who isn't ashamed to be working in a genre that has ghettoized countless filmmakers before him. At the same time, he's capable of more. While I enjoyed Hatchet, it's his non-Hatchet work (Spiral and [especially] Frozen) that really grabs my attention. Now that he has hopefully closed the book on Victor Crowley, Green can hopefully turn his focus to new projects and original work.

Hatchet III is definitive proof that the well has run dry. There is no more mythology to reveal; no more story to tell. It is one last attempt to wring a little money from fans willing to pay to see Victor Crowley kill some more people. Surely we go to the movies for better reasons than that.
Posted by Patrick Bromley at 11:38 AM