Review: This is the End 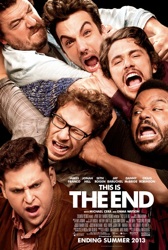 This is the End is one of the year's most experimental Hollywood films and one of the summer's best surprises. What could have been an obnoxiously indulgent inside joke or a paid hangout for the stars (think Couples Retreat) is instead an ambitious and ultimately sincere comedy that celebrates a whole bunch of things, including the chance to make a $30 million movie with all your friends.

The movie stars Jay Baruchel as Jay Baruchel, who flies in from Canada to L.A. to visit his old friend Seth Rogen, who also plays himself. Everyone does, sort of. The two go way back, but have been growing apart since Rogen moved to Hollywood, finding success and a new group of actor friends to go along with it. The pair go to a party at James Franco's house, where a who's who of young Hollywood is hanging out (including Rihanna, Aziz Ansari, Jason Segel, Kevin Hart, Christopher Mintz-Plasse and a few surprise faces). Jay doesn't want to be there and misses the way things used to be. Seth wishes Jay would at least try to make friends with his new group. This all seems like a pretty big deal until an earthquake rocks the Hollywood Hills and people start disappearing into the sky in beams of blue light. It's no ordinary earthquake. It's the fucking end of the world, and everyone that's still alive -- including Jonah Hill, Craig Robinson and party crasher Danny McBride -- is stuck at James Franco's house.

I'm an easy mark for this kind of potentially self-indulgent stuff, because I like these actors (Seth Rogen in particular, who is always the best thing about whatever he's in) and want to spend time hanging out with them. The movie offers lots and lots of time for that. But I also like the "meta" nature of it all -- that they're all playing exaggerated versions of themselves and goofing on their public images. There's a reason why the Hunting Season sequence in Kevin Smith's Jay and Silent Bob Strike Back is one of my favorite scenes in any of his movies. I like movies and I like actors, so I enjoy seeing them blur the lines and have fun with their own celebrity -- provided it's not just self-congratulatory bullshit. No one in This is the End can be accused of being self-congratulatory. James Franco comes off as a pretentious, spoiled oddball (pay close attention to his wardrobe, one of the movie's best and most subtle jokes). He even sneaks in a "so good" reference. Jonah Hill plays off his newfound respectability and tries to be the sweetest, nicest guy in Hollywood. Michael Cera...well, you'll just have to see Michael Cera. 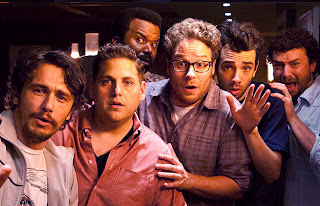 One of the things that's best about This is the End is that it treats the idea of the apocalypse seriously. Not, like, Melancholia seriously, but still seriously. We've seen so many movies lately about the end of the world -- or which aren't about the end of the world per se but which still revel in the wanton destruction of our entire planet -- and it's rarely treated as anything more than CGI spectacle. For all its pee drinking and jizz jokes, This is the End is willing to consider the moral implications of the apocalypse. The characters have to make choices, and the choices matter, even when they're played for laughs.

At its heart, the movie is about male friendship. The same can be said of so many other movies Rogen and Goldberg touch, from Superbad to Pineapple Express to 50/50; for some reason, Judd Apatow is still touted as Hollywood's authority on combining laughs and heart, but Goldberg and Rogen have a better track record in that department. The relationship between Seth and Jay provides the spine of the film, as both begin to recognize that the other isn't the same person he grew up with. But it extends beyond just those two characters; for all his pretentiousness and weird obsessiveness, it is suggested that James Franco is a true friend to Seth. Same goes for Craig Robinson and Jonah Hill. A shittier movie would have had the Hollywood actors reveal themselves to be phonies and Seth would realize he can only count on his one "grounded" friend, but despite the fact that it's a movie starring actors playing themselves in a movie, This is the End realizes that real life (or movie real life) isn't as simplistic as that. I'm sure it helps that the movie is pseudo-autobiographical, too, and Seth Rogen is unlikely to write a script in which he suggests that all his actual friends aren't really his friends.

So it's great that the movie is actually about something more than just the jokes, because so few comedies ever are. But what really matters are the jokes, and they're terrific. Here's a movie that never stops trying to be funny and which finds lots of different ways to do it -- there's physical comedy, funny dialogue, pop culture references (usually to their own movies or celebrity), gross out gags, sight gags -- you name it. There are a lot of big, big laughs in the movie, but there are even more smaller incidental laughs. I'll need to see This is the End again just to pick up on all the throwaway lines and jokes I missed. There were several, but I wasn't alone -- I don't think anyone else in my showing picked up on just how many times Craig Robinson repeated the name of his light-up keychain. 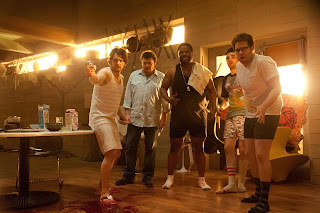 The world can use more movies like This is the End: small to mid-budget movies made by people with a specific vision who are able to make the movie they want. So many summer movies are focus grouped and test marketed to death. This one is rough in spots, most likely because Rogen and Goldberg also serve as first-time directors. The editing could be tighter, and the budget restrictions hamper some of the bigger set pieces. The earthquake/sinkhole sequence near the beginning suffers in particular -- it feels rushed and misses a number of good opportunities for gags, possibly as a result of actor availability. Sometimes, the effects are deliberately low-fi and funny; an early head-crushing is right out of a Troma film. Other times, though, it's obvious that Rogen and Goldberg are out of their depth when it comes to staging the action. This is the kind of movie that could use the touch of an Edgar Wright (and as if to prove my point, he's basically got his own version of the same film -- right down to the title -- coming out later this summer) to really sell some of the scale and give the big stuff some polish, but I suspect that the roughness will grow on me in future viewings. This is clearly a labor of love for Rogen and Goldberg, who made a movie with their friends because it made them laugh. Thankfully we get to be in on the joke, too.

This is the End is one of the best times I've had in a theater this year. I got to hang out for two hours with a bunch of guys I really like and drop in on them goofing on each other. I got to see a movie willing to go deliriously crazy, but which puts its money where its mouth is. For as much fun as the movie has with the nature of celebrity and the privilege of Hollywood actors, it's not a cynical film. Even as so much of it was going to Hell, This is the End left me feeling good about the world.
Posted by Patrick Bromley at 7:54 AM