You guys are getting spoiled with all the stuff we're recommending. 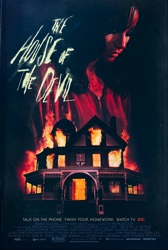 Adam Riske: 6/15: '80s Action - Streets of Fire (1984, dir. Walter Hill) Patrick wrote a great column about Streets of Fire and I agree with him. It's such a good time and the concert scenes are pretty much movie magic. I liked Streets of Fire the first time I watched it and my appreciation has only grown since.

6/16: Free Space - The House of the Devil (2009, dir. Ti West) Ti West's The House of the Devil is one of my all-time favorite horror movies (maybe #2 after Carnival of Souls) and if you haven't seen it yet, especially if you liked The Innkeepers, you owe it to yourself to check it out. The first time I saw The House of the Devil was On Demand on a night I could not fall asleep, so I watched it at 3 or so in the morning and basically sat in my lounge chair with my hand to my face in utter suspense for the entire 90 minutes. The next day I couldn't wait to tell anyone and everyone about what a great horror movie I stumbled upon. It's the horror movie that reinvigorated my love of the genre because it proves that you can stumble onto a classic when you least expect it.

6/17: Slashers - Satan's Little Helper (2004, dir. Jeff Lieberman) This movie fascinates me. I can't tell if it's subversive and brilliant or utter trash. Maybe it's both.

6/19: Kung Fu - Ong Bak: The Thai Warrior (2003, dir. Prachya Pinkaew) There are some BRUTAL fight scenes in this movie. Definitely one of the best action movies (from a hand-to-hand fighting perspective) in the past 10 years. Tony Jaa is such a badass. BTW...never watch Ong Bak 2. It's the worst. 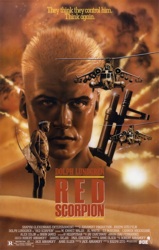 Heath Holland: Red Scorpion (1989, dir. Joseph Zito) If you're looking for something to watch for '80s Action Day during Junesploitation, then I recommend one of Dolph Lundgren's earliest starring roles, Red Scorpion. Dolph is a Soviet who is tasked with fighting an anti-communist movement in Africa and ends up discovering that communism is all, like, bad and stuff. This movie exploits the awesomeness of Dolph Lundgren, which you could build thousands of movies around. And I hope they eventually do. 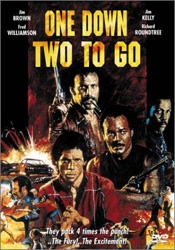 JB: June 14th: Blaxsploitation! - One Down, Two To Go (1976, dir. Fred Williamson) Not the best blaxsploitation actioner ever made to be sure, but worth watching for the cast alone: Jim Brown, Jim Kelly, Richard Roundtree, exploitation fave Joe Spinell, and director Fred Williamson. Yowsa. A bunch of rogue cops go looking for the guy that messed up their buddy during a rigged martial arts tournament. With a plot like that, how can you resist?

June 15th: '80s Action - Commando (1985, Mark Lester) The director of Roller Boogie and Firestarter brings us one of the more “actiony” of all of Arnold’s early action films; it is goofy fun. It also changed Patrick’s life.

June 16th: Free Space - May I suggest, spending some time with your loved ones on this day?

June 18th: Sid Haig - Jackie Brown (1997, dir. Quentin Tarantino) If you didn’t watch this one for Pam Grier day or Bad Ass Chicks day, here is your last chance! I was hoping Diamonds are Forever was on Netflix Instant, but alas, it is not. Sid Haig plays a two-bit hood in that one; at one point he throws a topless Lana Wood (Natalie’s sister) out of a high-rise window. Gosh, Sid.

June 19th: Kung Fu - Game of Death (1978, dir. Robert Clouse ) I know, I know; this one is controversial. Game of Death is the film Bruce Lee had only half finished before his untimely death. Using doubles, leftover footage, and lots of obvious editing tricks, the producers cobbled together this Frankensteined chop-socky flick. Game of Death is worth watching for its place in film history alone.

June 20th: Roger Corman - The Fast and the Furious (1955, dir. Edward Sampson) No, not THAT Fast and Furious! This one was made over fifty years ago. Because of the relative paucity of “genuine” Corman titles on Netflix Instant, try this early film that he both scripted and produced. It certainly has that distinctive Corman flavor we have all grown to love! John Ireland goes on the lam to clear his name. Luckily, he has a real fast car (for 1955 anyway) and Dorothy Malone! 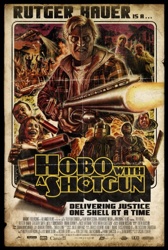 Patrick:
Blaxploitation! - J.D.'s Revenge (1976, dir. Arthur Marks) Glynn Turman from Gremlins gets possessed by a pimp. Ok, not a pimp, really. More like a hustler from the '40s. But it's  pretty much a pimp. Very entertaining.

'80s Action! - Lone Wolf McQuade (1983, dir. Steve Carver) One of the better Chuck Norris movies ever made, which may not be saying much. It's fun to see Norris go up against David Carradine, and the action is pretty good. John Milius did an uncredited rewrite.

Free Space! - Hobo With a Shotgun (2011, dir. Jason Eisener) This is not a great movie, but from the title on down it wants so desperately to be an '80s-style exploitation movie -- a cross between Cannon and Troma -- that it's worth at least one watch during Junesploitation. Director Eisener first made a fake trailer for this that played with Canadian prints of Grindhouse; it was so popular that, like Machete, he expanded it to feature length. It's screechy and obnoxious and overwrought, but crazy in a good way and worth seeing just for the 100% committed performance by Rutger Hauer as The Hobo.

Slashers! - Hatchet II (2010, dir. Adam Green) Another movie that's less the real thing than it is a throwback to the real thing, Adam Green's sequel to Hatchet is badly paced, overly plotted and too jokey by half, but it is one of the best '80s slashers to come out after the '80s. Plus, that guy sings the "biscuits" song.

Sid Haig! - The Haunted World of El Superbeasto (2009, dir. Rob Zombie) Sid Haig only does a voice and makes a cartoon cameo (as Captain Spaulding!) in Rob Zombie's animated horror/comedy/musical, but this is a perfect movie to watch for Junesploitation. Tons of horror references and wall-to-wall cartoon violence and cartoon nudity. For people who find Ralph Bakshi and Heavy Metal too sophisticated and adult.

Kung Fu! - Dragon Lord (1982, dir. Jackie Chan) This is far from one of Jackie Chan's best movies, but there are two sequences alone that make it worth watching: a game sequence halfway through that's home to some of the most incredible athleticism you'll ever see and the final fight scene, which is great. If you're not feeling this one, try BKO: Bangkok Knockout from 2010. It is a completely crazy movie, both unintentionally hilarious and packed with some of the best action choreography this side of The Raid.

Roger Corman! - Battle Beyond the Stars (1980, dir. Jimmy T. Murakami) I like Corman's AIP output better than his stuff at New World (even if New World did give us Joe Dante and James Cameron), and I'm not even the biggest fan of this movie, a rip-off of both Star Wars and The Seven Samurai. But it's a good representation of post-Star Wars exploitation, when the little guys stopped being content being their own weird thing and just started imitating Hollywood's biggest movies.

Posted by Patrick Bromley at 7:46 AM