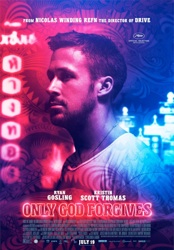 If you watch any five minutes of Only God Forgives, you might think it's a masterpiece. What you don't realize is that the remaining 84 minutes are just those same five minutes repeated on a loop.

Contrary to popular opinion, I don't believe that Only God Forgives is a terrible movie. It's just a movie that might not be very good, albeit one that is beautifully made. It is a stunningly gorgeous movie about only ugliness and horror -- the definition of Bruised Beauty. It demonstrates writer/director Nicholas Winding Refn to be one of the best working formalists: his compositions, neon red-soaked lighting and pulsing score (again by Drive composer Cliff Martinez) are all as good as anything else I'll see on screen this year, but in the service of very little, story-wise. Its themes are entirely single-minded, never really going any deeper than the movie's title. Yes, Only God Forgives. That is the movie's lone attempt at a statement: the world is a horrible place in which horrible people murder one another horribly. Oh, and sometimes men want to fuck their mothers.

Ryan Gosling once again brings his mopey A-game as Julian, an American running a boxing club in Bangkok. His brother, a real piece of shit, rapes and murders an underage prostitute in one of the few horrible acts that's allowed to happen offscreen in the movie. A deranged cop, Chang (Vithaya Pansringarm), gets the case and has the dead girl's father to slaughter Julian's brother, which kicks off an endless cycle of revenge between Chang's gang and Julian's crime family, led by his horrible mother (Kristin Scott Thomas, mostly unrecognizable). Lots of people die. Only God forgives. 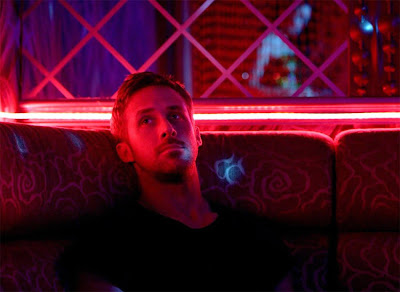 Though Refn has been making movies for nearly 20 years, he has remained something of a cult/arthouse filmmaker for most of his career. That means that the biggest point of comparison for Only God Forgives for most audiences will be Refn's last movie, Drive -- not just because his commercial breakthrough is the only film of his that they have seen but also because this one stars Ryan Gosling, is scored by Cliff Martinez, features the same long scenes of silence and sudden bursts of violence. Anyone looking for Drive 2 is going to be sorely disappointed. This is a movie that takes many of the things you liked about Drive uses them against you. Both are movies about essentially nothing, but Drive was about nothing in a cool way, while God is about nothing in a way that wants to hurt and upset you. Plus, Drive has characters in which we could invest and colorful, human performances. There was a love story at its center that gave the movie a beating heart; the sting came when we were reminded of why it was doomed. Only God Forgives has no interest in you ever caring about anyone, and fuck you for trying.

This doesn't automatically make it a bad movie, just a movie in which I am much less interested. Plenty of good films have been made out of terrible people doing terrible things. Characters can be unlikable while still giving us a reason to care about what happens to them, even if it means hoping they get what's coming. Not so in Only God Forgives. No, the characters (what little of them there is) are not likable by design. But they are also impossible to invest in or care about in any way; when someone is killed, it registers less than a teenager at Camp Crystal Lake. Refn compensates for our lack of any emotional investment by making the violence as graphic and harsh as possible -- if we're not going to cringe because someone we care about is dying, we sure as hell are going to cringe at the way in which someone we don't care about is dying. 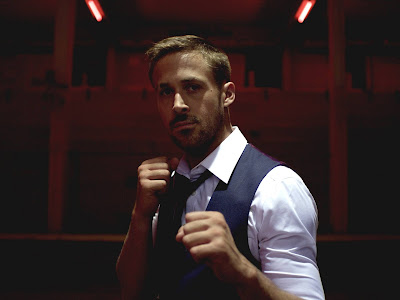 Gosling does the same blank, sad stare he did in Drive, but the context here changes our interpretation. There was enough going on in Drive that we assumed his blankness meant he was keeping everything under the surface -- that he was secretly a rich torrent of emotion waiting to gush if only some single mom/pixie could help him open up his heart. In Only God Forgives, the blank stare is because he doesn't know what the fuck to do. Julian is paralyzed by inaction, unable to stand up to his mother and be his own man. He can't even have sex with his prostitute friend Mai; he just pays her to masturbate in front of him. The guy literally can't do anything.

So about the mom. Kristin Scott Thomas is fine in the role and is clearly relishing the opportunity to play against type; looking like Paris Hilton after 50 years and two kids, she's all "cock" this and "cum dumpster" that. It's the kind of performance that critics go crazy for because it's just so different than the stuffy British character type we're used to her playing. Trouble is, for all her made-over looks, her vulgarity and her nastiness, there just isn't a character there. She is a vicious ball-breaker, nothing more. Besides the obvious currents of violence and revenge that run through the movie, Only God Forgives' Freudian undertones are the only thing it has going for it, substance-wise. In truth, calling them undertones is a massive understatement. There is nothing subtle about how much of the movie is about Julian fucking (or wanting to fuck) his mother. She has a hold on him that is not articulated. She explicitly compares the dick sizes of him and his brother. She speaks about them in sexual terms. It explains Julian's inability to relate to Mai on even a sexual level. And, in case we still haven't gotten the message, at one point Julian literally tries to get back inside his mother's womb. 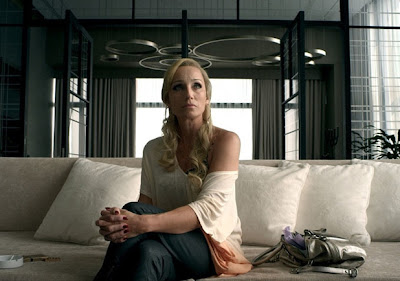 Only God Forgives is a frustrating experience. Maybe that's what Refn was after all along; like Julian, we can only watch in horror as terrible things play out, but we cannot do anything about it. The movie is not, as some critics have suggested (this was one of many films to receive a chorus of "boo[urn]s" at Cannes), without value. There are things to like. It is meticulously made. The music, the images, the endless tracking shots (it could have been called Push-in: The Movie) create a kind of trance -- though it's available on VOD (which is how I saw it), this is a movie that deserves to be seen in a theater. While it's playing, Only God Forgives casts a spell. Only when it ends do you realize that you are closing your hands on air. The movie is too pretentious to be truly pulpy, but still too thin to carry any weight.

But, again, maybe I'm being a hypocrite here. Earlier this year, I gave a positive review to Rob Zombie's The Lords of Salem for doing almost the exact same thing. Perhaps its just a matter of expectations, or perhaps it was easier to praise because that was a horror film and Zombie achieved exactly what he set out to do. I'm not sure what Refn's intent is with Only God Forgives, except to make a movie about lives lived in a cycle of brutal violence. This is a movie that will definitely have its fans. I just don't think I'm one of them.
Posted by Patrick Bromley at 12:03 PM