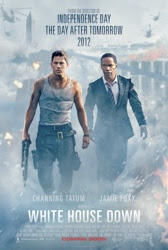 I'm not sure I have the words.

I really can't be mad at White House Down for being a bad movie, because it's the exact kind of bad movie that Roland Emmerich makes over and over. So I may be all "White House Down, you broke my heart!" but it's all "Bitch, you knew I was a scorpion."

White House Down didn't really break my heart, though it sure did disappoint. I am the audience for this movie. It is well documented on this site that I have developed quite a thing for Channing Tatum in the last 18 months. I'm a fan of Roland Emmerich, even though I only like about half of his movies. Die Hard, which this movie rips off wholesale, is still my favorite action movie of all time. It stands to reason that a Die Hard imitation directed by Roland Emmerich and starring Channing Tatum should be a home run.

Tatum is John Cale, a former soldier working a security detail for the Speaker of the House (Richard Jenkins). He brings his estranged daughter Emily (Joey King) to the White House for a tour while he interviews for a spot with the Secret Service on the very same day that James Woods and Jason Clarke (of Zero Dark Thirty) stage a coup and take over, holding sitting President James Sawyer (Jamie Foxx) for an undisclosed ransom. Luckily, Cale is inside and on the loose when the terrorist hit --- he just wants his daughter back! -- so it's up to him to keep Sawyer alive and stop the bad guys from doing...whatever it is they plan on doing. 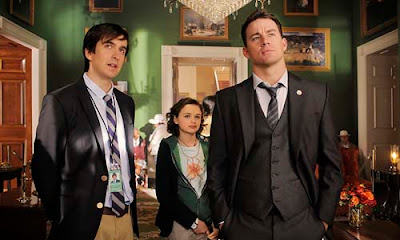 Because White House Down isn't content to just rip off Die Hard (though there is a good deal of that, down to the white tank top Cale sports), a lot of the bad guys' plan feels reminiscent of The Rock -- they're "patriots" who feel betrayed by America and are seeking some form of restitution -- but because their true motivations are obfuscated for so much of the running time, they never generate the same interest or sympathy that Ed Harris did. It's a choice that hurts the movie, and while I know why the filmmakers laid it out this way (a certain development would have been revealed too early any other way, though whether or not that would have mattered is up for debate) it doesn't change the fact that the movie is lesser for it. Just revealing new information does not automatically equal raising the stakes.

Even when it isn't referencing one movie explicitly, White House Down plays like an assemblage of action movie cliches. I wouldn't even complain about that -- I'll take an action movie that feels familiar if it's getting the job done -- but White House Down can't even play them straight. It has to present the dumbest possible example of every cliche. The most egregious of them is the "hacker" character (played by Jimmy Simpson), who wears fingerless gloves and blasts classical music and travels with a supply of lollipops. For a little while, I thought he was going to be the worst thing in the movie. I should not have underestimated Roland Emmerich. There was still plenty of bad to come.

Channing Tatum can't really be blamed for the movie's failure, as he certainly gives it his all and helps ground the movie as much as he can. There's really not a bad performance in the cast (as far as the major roles are concerned, that is; there's a guy playing a tour guide about whom the less said the better), and everyone seems overqualified: Richard Jenkins, Woods, Clarke, Maggie Gyllenhaal, Foxx -- even little Joey King is really good as Tatum's daughter. They're good actors stuck with bad material, and without them I'm not even sure this thing is even watchable. 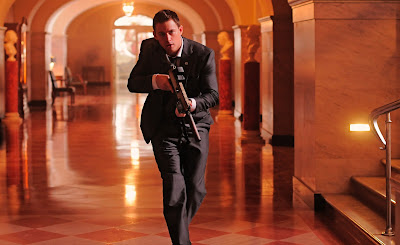 If anything, Tatum's performance is hampered by the fact that he's not in the movie enough. We don't know enough about his character (he wants his daughter back and he wants to be in the Secret Service), and Emmerich is so concerned with a "big picture" look at what would happen if the White House was taken that he can't be bothered to follow John Cale closely enough. We get all kinds of scenes focused on the political process of determining a new president and scenes outside the White House of Gyllenhaal (playing another Secret Service agent) and the military determining strategy and newscaster talking about what's going on and Cale's ex-wife watching the events unfold on TV and what the hostages are doing and before long we've lost focus on what the movie needs to be to work. Die Hard is great because it presents us a terrific character and follows him through an impossible situation. By turning White House Down into an ensemble movie like Independence Day or The Day After Tomorrow or 2012, Emmerich robs it of its most important connection.

I'll say this for White House Down: in a summer where it feels like so many blockbuster screenplays are being made up on the spot, James Vanderbilt's script is more tightly constructed than most. It's still full of stupid shit, but at least it sets things up in the beginning and pays them off by the end -- often to a fault. Emmerich is so worried that we won't notice every single little callback that he has to underline them in big stupid neon lights. Jamie Foxx is established a pacifist early on, quoted as saying he believes "the pen is mightier than the sword." There's the set up. Then later, a character who is holding him at gunpoint says something like "Still think the pen is mightier than the sword?" So now it's been reinforced -- that way, when Foxx finally stabs someone with a pen, WE GET IT. But just in case we don't, Emmerich is sure to add some awkward ADR of Foxx yelling "I prefer the pen!" FINALLY IT ALL MAKES SENSE. I was disappointed he didn't yell out "D'Artagnan, motherfucker!"

There is a moment in the movie that might be the most fucking ludicrous thing I've seen in a movie this year, made even more so by the way that the film slavishly builds towards it. I won't spoil it in case you're planning on seeing it, but it involves a little girl and a flag. It is hilarious, but unintentionally so. Had the movie been just a little more self-aware, I would have been comfortable knowing it the scene was designed to be laughed WITH and not AT, but such is not the case. That's one of the big problems with White House Down. It's too goofy to take seriously but too serious to enjoy as a goof. 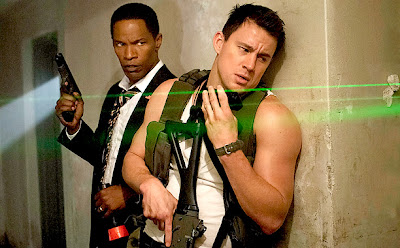 But the worst and most distracting thing about White House Down is just how cheap it looks. With a price tag of $150 million, the movie is not cheap AT ALL, but for some reasons boasts special effects that look like something made for the SyFy channel. And while I can't confirm it, I would guess that not a single exterior shot was actually filmed outside -- every scene has the feel of something done on a stage, with artificial light passing for sun and green screens making up the backgrounds. CGI has come a long way, but it's still not able to completely trick our eye that something is off about what we are seeing, and that sense of "offness" is all over White House Down. Roland Emmerich is supposed to be the guy who makes big, dumb, expensive movies in which things look great as they blow up. In this case, he only got the dumb and expensive parts right.

This is, of course, the second Die Hard-in-the-White-House movie released this year. The Deep Impact to this movie's Armageddon was Olympus Has Fallen, released back in March. I didn't see that movie, but our own Adam Riske did; you can read his review here. Having seen White House Down, I'm starting to think I've backed the wrong horse. Maybe I'll see the movie a year from now and find myself much more susceptible to its charms. It's certainly happened in the past with Emmerich's movies, which I often don't like the first time around.

I don't want every movie this summer to be a frustrating experience. I want to be entertained, to have fun, to be engaged with something. I thought White House Down would provide that. Instead it's a lot of nonsense -- and not the good kind, where a movie is so ludicrous that you have to give yourself over to its goofy energy -- and Emmerich's usual brand of tone-deaf humor. Here's a thought, Roland: don't bother establishing stakes that involve global nuclear annihilation if you're going to have a hissy tour guide complain about breaking vases in the same scene. Emmerich seems to have decided a long time ago that his movies have to include humor in order to appeal to everyone.

You know what appeals to everyone? Good, solid movies. Make one of those next time.
Posted by Patrick Bromley at 6:44 AM