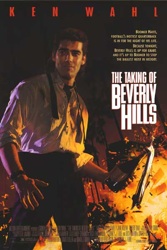 Holy shit, have you guys seen The Taking of Beverly Hills? Just kidding! No one has seen it.

One of the many knock-offs to hit theaters in the wake of Die Hard, The Taking of Beverly Hills (or ToBH) was barely released back in 1991; though made for a budget of $19 million, the movie only made $900,000 at the box office. No one saw it.

In fact, even today the movie is hard to see. It's never been released on DVD or Blu-ray. It doesn't show up on cable. I was only able to view it in 10 minute increments on YouTube, which is hardly the ideal way to watch anything, much less an action movie filled with explosions and bad football puns. But more on that in a minute.

I had forgotten all about The Taking of Beverly Hills for almost two decades until a few years ago when I was perusing the lineup at L.A.'s New Beverly Cinema (though I live in Chicago, I like to see what's playing there every month so I can curse my parents and the day I was born), and I became terribly jealous that there was going to be a 35mm screening of the movie all the way on the other side of the country. I remembered that I totally wanted to see it back in '91 -- not because it looked really great or anything, but because it's exactly the kind of movie I've always loved (movies like this are the reason for this column), and because for some reason I was intrigued that the hero of the movie was a quarterback.

Having finally seen it, I can say that The Taking of Beverly Hills is exactly the movie you think it is. There are a bunch of good ideas in the movie -- namely, the central premise -- but it's sometimes lazy and pretty badly executed. I still had a really good time with it because it's incredibly entertaining, but it's only for the most devoted fans of both the genre and the period. 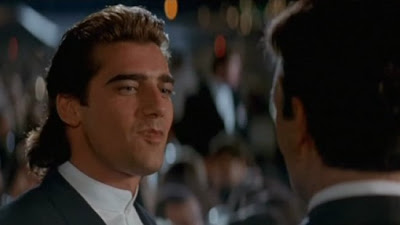 It should be noted that the opening credits of this movie last for nearly SIX MINUTES, during which no story is told, no plot is advanced and no characters are introduced. It's a six-minute montage of people shopping while a cover of "Be Thankful for What You Got" by a guy named Peter Blakely plays on the soundtrack. This is not a movie in any big hurry to get where it's going.

Ken Wahl (of Wiseguy fame, a show I've never seen -- I KNOW) plays Boomer Hayes, an aging quarterback for an unnamed L.A. football team. While macking on new acquaintance Laura Sage (Harley Jane Kozak), the entire city of Beverly Hills is attacked by a group of disgruntled ex-cops who stage phony gas attack, evacuating the city and looting all of the homes and businesses. Boomer ends up the only guy left behind to fight, which is exactly what he does, teaming up with officer Ed Kelvin (M-m-m-m-Matt Frewer, the wacky comic relief) to stop the invasion, save Beverly Hills and rescue Laura from the big bad guy -- who just happens to be Boomer's boss, team owner Robert "Bat" Masterson (played by Robert Davi, because OF COURSE HE IS).

So it's not quite Die Hard, because the setting isn't as claustrophobic, but the idea at play is still one guy trapped (all of Beverly Hills stands in for Nakatomi Tower) and having to stop all of the bad guys himself. The fact that he's teamed up with a sidekick makes it more like Die Hard with a Vengeance. Or Live Free or Die Hard. Or A Good Day to Die Hard. This movie came before any of those, though, so I guess it counts as innovation.

Unfortunately, the Beverly Hills setting is rarely utilized as well as it could have been. Little use is made of the locations until the climax. The rich snobs don't get their comeuppance, nor do they get to exact any payback despite being the victims in the movie. Even weirder is that there is no commentary on class or wealth -- The Taking of Beverly Hills more or less sides with the rich people. Boomer Hayes isn't the John McClane everyman, forced to swallow his pride to rescue the bourgeoisie he would normally go out of his way to avoid (or at least insult with a smartass remark at every opportunity). He's a millionaire quarterback -- a rich guy fighting to protect the "stuff" of other rich people. He's not even keeping them safe, because the city has been evacuated. It's only late in the movie that BEVERLY HILLS starts to matter. By the time Boomer is running around the shopping district hurling Chinese throwing stars like footballs into cop cars that crash into and blow up every fancy boutique on Rodeo Drive -- all while Faith No More's "Epic" plays on the soundtrack -- the movie has finally achieved the kind of hallucinatory lunacy it spends too long avoiding. It's the rare action movie that takes us to a place of "What the fuck am I watching?" Credit where credit is due.

Just in case you aren't sure when the movie was made while watching it, the soundtrack also features Janet Jackson's "Black Cat" and "Unbelievable" by EMF because OF COURSE IT DOES. That song is the musical equivalent of the film. 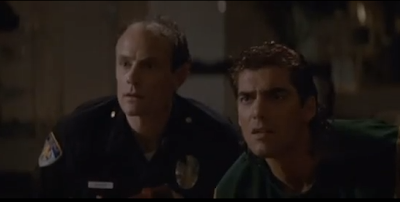 One of the best aspects of The Taking of Beverly Hills is just how much it embraces its football-themed goofiness. Boomer is a quarterback, see, so he can only relate to people (and vice versa) by speaking in references to the game.

"I'm a master at moving down field and they don't know I'm in the game!"

"You just got drafted!"

"I am NOT playing defense anymore!"

But it's not just the football puns that make for memorable gems in the movie's screenplay. Here's a sampling of some of the best lines NOT referencing football:

"If you fuck up this time, you'll be the deadest hitman in Beverly Hills. Because I'm gonna kill you myself."

"You know, Laura, you're just another notch on his jock strap."
"You're just a genital obsessive."
"Aren't we all? Ha ha ha ha."

Action movies -- particularly the ones from the '80s and early '90s -- are known for having bad, often corny dialogue, but there is something transcendent about the degree to which Beverly Hills' screenplay (credited to three writers) embraces its own insane dialogue. It becomes a kind of action movie poetry. No movie with dialogue like this can be entirely bad, because it's just too much fun to watch.

There's another touch in the movie that I love: because Boomer is a football player, he's got a bad leg and walks for most of the movie with a limp. Turns out that it's really because Wahl injured his Achilles' tendon while shooting his TV series Wiseguy and the limp was just written into the script. There's something that humanizes Boomer as an action hero -- not surprisingly, it comes right out of the Die Hard playbook, which has John McClane running around barefoot for the entire movie because it's the fucking best.

This was Ken Wahl's big shot at movie stardom. He had been acting since the '70s, but Beverly Hills was the movie that came out in the wake of his Wiseguy fame -- it felt like the one that was trying to make a movie star out of a TV star (much like...I don't know...Bruce Willis?), except that Wahl was doing movies first. I'd call this one his best, but obviously that would be The Wanderers. Besides, there's not much else to choose from. Have you seen The Favor? Jinxed? Race for the Yankee Zephyr? You really don't need to (that last one is not the worst, but the location photography is the best thing about it). Wahl stopped acting pretty much altogether in the '90s, save for an appearance in a Wiseguy TV movie, making this a curiosity on the level of Stone Cold and The Perfect Weapon -- action movies that tried to create a new genre star but which ended up being more of a one-off. 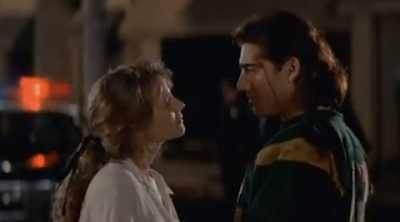 The Taking of Beverly Hills is a Heavy Action case study in what makes a "good" movie. Is it strong acting, nuanced writing, stylish direction, competent storytelling? Because the movie falls short in several (or all) of those areas. Or is a good movie simply one that's very, very entertaining during its 90 minutes? By those standards, The Taking of Beverly Hills is practically a masterpiece. Director Sidney J. Furie -- he of Iron Eagle and Superman IV: The Quest for Peace fame -- isn't going to give John McTiernan a run for his money any time soon, but there's an absurdist streak that runs through many of his movies that approaches Craig Baxley territory. That's a good place for action movies to be.

In closing, a plea to the Home Video Gods:

Dear Sony,
Please release The Taking of Beverly Hills on DVD and Blu-ray very soon. I already live with too much resentment and can't handle any more. Thank you.

P.S. - The movie was just released on Blu-ray in Germany. Lucky Germans. If anyone wants to buy me a region-free player, I can be reached at fthismoviepodcast(at)gmail.com.

Got a movie you'd like to see included in a future installment of Heavy Action? Let us know in the comments below.
Posted by Patrick Bromley at 12:14 PM