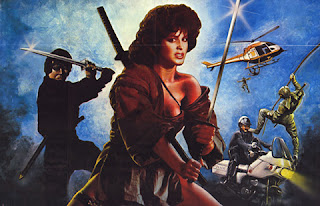 Did anyone do exploitation better than the Cannon Group?

Today we're celebrating the films of Cannon for Junesploitation, so it's a perfect time to shine a light on some of the studio's most important movies. If you've never seen a Cannon film and want to get a good idea of what their output was like in their heyday, these 10 (actually 12) movies are a good place to start.

1. Breakin' (1984) - Like the best exploitation filmmakers, Cannon owners Menahem Golan and Yoram Globus knew how to seize on a trend and turn it into a movie -- ANY movie. Perhaps their most famous example of trend exploitation (trendsploitation!) is 1984's Breakin', a musical designed to cash in on the dance craze of the early '80s. Because the movie is dated and cheap (because Cannon), it's become the subject of ridicule in the years since. It is, however, a lot of fun, with tons of energy and a sense of joy to the dancing about which it is hard to be cynical. Few Cannon movies are this feel-good. It was followed later the SAME YEAR by Breakin' 2: Electric Boogaloo, as well as a few other knock-offs that tried to cash in on a teenage fad: Rappin' in 1985 and Salsa in 1988.

2. Death Wish 3 - For most of the '80s, Cannon was in the Charles Bronson business: beginning with Death Wish 2, the actor made a movie for Golan/Globus almost every year: Kinjite: Forbidden Subjects, 10 Past Midnight, Assassination, Messenger of Death, Death Wish 3 and Death Wish 4: The Crackdown. The best of all of them is Death Wish 3, which plays like a Death Wish movie on freebase. Paul Kersey, who once became in a vigilante to avenge the murder of his wife (Death Wish) and daughter (Death Wish 2) relocates to New York and will now kill some motherfuckers at the drop of a hat. He takes on a gang that's terrorizing an apartment building full of old people. This is a crazy movie in the best possible sense; if you only watch one Cannon/Bronson joint, it has to be this one.

3. The Ninja Trilogy - Ok, so this is a cheat, because it's three movies. But there's no way to split up Cannon's ninja trilogy, three films that are totally unrelated to one another except that they all exist to exploit the ninja craze of the 1980s (and they all feature Sho Kosugi). It begins with 1980's Enter the Ninja, which stars Django's Franco Nero as a balding, mustachioed ninja who had to do battle with Kosugi when an evil CEO hires an assassin to get Nero's friends off their land. Go ahead, read that again. Ninjas, corporate executives, secret oil repositories, Italian ninjas. Two years later came Revenge of the Ninja, which graduated Kosugi to the lead and has him playing a guy who swears off the ninja life after his family is (mostly) murdered, but is called back into action when his American business partner reveals himself as a ninja assassin. So once again we get corporate politics mixing with shuriken and nunchakus. The movie is sublime, but the best was yet to come: 1984's Ninja III: The Domination, which ups the crazy of the past two movies by combining the ninja genre with a supernatural possession film. Breakin' star Lucinda Dickey plays an aerobics instructor whose body is taken over by the spirit of a dying ninja bent of revenge, so she has to enlist the help of good ninja Sho Kosugi (the hat trick!) to cure her. The Domination is one of the most entertaining exploitation movies of the '80s and one of my favorites in Cannon's enormous catalogue if only for how fucking nuts it is. Scream Factory is putting it out on Blu-ray this month. If you have enjoyed ANY of Junesploitation thus far, do yourself a favor and pick it up.

4. The Last American Virgin (1982) - One of Cannon's only non-Breakin' teensploitation efforts. The film, an attempt to bring the success of the popular Israeli Lemon Popsicle series to the U.S., follows three friends -- normal guy (the all-too-authentic Lawrence Monoson), jock (Steve Antin) and fat guy (Joe Rubbo, probably the best real-life fat guy name ever) -- trying to get laid, because that's what teenage boys did in the '80s (and at no other time in history). There are a lot of stupid set pieces, but Virgin seems determined to explore the dark and horrible side of all those wacky sex hijinks. It also has one of the saddest, bleakest endings of any teen movie made in the '80s. Killer soundtrack, too, which is entirely how the movie was sold. See it or be it.

5. Cobra (1985) - Every once in a while during the '80s, Cannon would get a shot at the big time. What's great about Cobra, the first of two movies with Sylvester Stallone (the other is Over the Top), is that instead of dressing themselves up to match their A-list star, they just dragged Stallone down to their level -- replace him with Charles Bronson or Michael Dudikoff and Cobra is every other action movie Cannon made in the '80s. It's violent, sleazy and stupid -- the studio's stock-in-trade.

6. Masters of the Universe (1988) - Cannon once again attempted to break through to mainstream respectability with this "family" fantasy film based on the popular children's cartoon, which was, in turn, based on a popular children's toy. As usual, their eyes were bigger than their wallets, and the budget kept getting slashed during production; even the climactic battle of the film was scrapped because Golan and Globus wouldn't allow any more filming (it was eventually shot as a weird backlit thing inside a garage or warehouse, but it's nothing like originally intended). Nowadays, it feels pretty cheap and tacky, but 10-year old boys don't really give a shit about that stuff. They think a lot of it is cool. And, to be fair, a lot of it is. The movie is softer and more ambitious than most Cannon films, but the studio's presence can still be deeply felt. 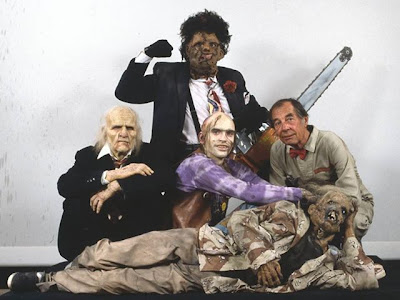 7. The Texas Chainsaw Massacre Part 2 (1986) - For as much as the Cannon Group trafficked in exploitation, they didn't make many horror movies, which makes The Texas Chainsaw Massacre Part 2 a fascinating rarity in the studio's catalog. After finding huge box office success with Poltergeist, director Tobe Hooper signed a three-picture deal with Cannon and essentially sealed his fate. Each of his films for Cannon, starting with the underrated Lifeforce and ending with his remake of Invaders from Mars, was a critical and commercial disappointment, and Hooper's career never really recovered. Released just a few weeks after Invaders from Mars was The Texas Chainsaw Massacre Part 2, Hooper's follow-up to the film that made his career and one of Cannon's few entries into the horror genre. Eschewing the gritty realism of the first film, Part 2 goes for black comedy -- it's a neon-lit, garish bit of demented lunacy that's unlike anything else Cannon produced. For as broad and bloody as it is, Texas Chainsaw Part 2 is real art. Every once in a while, Cannon let real art sneak by.

8. Invasion U.S.A. (1985) - Like with their relationship with Charles Bronson, Cannon was basically in the Chuck Norris business throughout the 1980s: Missing in Action and Missing in Action 2, Firewalker, The Delta Force, Hero and the Terror, Braddock: Missing in Action III, Delta Force 2 and The Hitman were all made for the studio in a 10-year span. The best and most representative of all his movies with Cannon is Invasion U.S.A., not just because it casts Norris as a block of soap that kills people, but also because it best expresses so many of the themes and concerns that permeated all of Cannon's '80s action films: that America is a scary and dangerous place that can be taken over by splinter groups either outside the country (like they are here) or from within (gangs were making the streets unsafe in roughly half of Cannon's movies). The only way to respond is with brutal, relentless violence. This is a demented, fascist action movie for purists only. Luckily, many of us fit that bill. 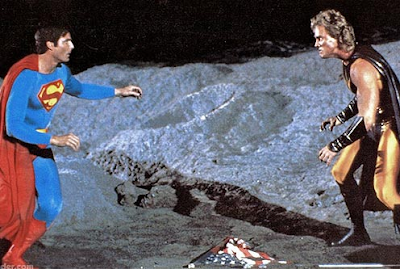 9. Superman IV: The Quest for Peace (1987) - As much as Cannon was a playground for genre films in the 1980s, the studio was very capable of fucking everything up. Case in point: they took a beloved franchise like Superman and drove it straight into the ground, grossing only $15 million with Superman IV (the previous installment had made $70 despite being a piece of shit) and making a movie largely considered to be one of the worst of all time. Many of the film's problems are blamed on budget cuts; shot for only $17 million (Superman III cost $39 million four years earlier), the studio was basically broke when the movie went into production and corners were cut everywhere -- most noticeably in the special effects, which look like someone holding up a cardboard cutout of Christopher Reeve and pretending to make it fly. The one good thing to come out of Superman IV was that Reeve got to make whatever other movie he wanted as part of his deal, which led to Street Smart, one of the best and most legitimate movies in Cannon's library. Superman IV demonstrated that the studio needed to stick to what they were good at and not fly too close to the sun. Like Nuclear Man.

10. Cyborg (1989) - Director Albert Pyun made several movies for Cannon, but this remains his best one: a post-apocalyptic sci-fi western starring Jean-Claude Van Damme (who got his start at Cannon with Kickboxer and Bloodsport) as a guy trying to transport a cyborg across the country. The movie, shot quickly and cheaply as a way of trying to salvage some of the money spent on failed productions of both a Spider-Man movie and a sequel to Masters of the Universe, owes a lot to the spaghetti westerns of the '60s with its open vistas, spare dialogue and emphasis on the "showdown." And in yet another example of late-era Cannon meddling, it's also not the movie Pyun made, which was originally moodier, less action-oriented and had a heavy rock score and a whole devil worship subplot. That version, called Slinger, can be bought directly from Pyun's website. If you're a fan of Cyborg, it's worth checking out.