It Came from the '80s: Lifeforce 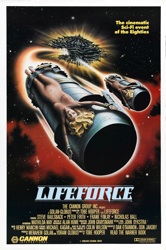 There are basically two kinds of people in the world: people who have never seen Lifeforce and people who don't think Lifeforce is very good. I am neither.

Lifeforce is the movie that pretty much killed Tobe Hooper's directing career. The first of his three-movie deal with the great Cannon Films, the film recouped less than half of its $25 million budget (which, for Cannon, might as well be Avatar money) and made Hooper something of a laughing stock in the process. Maybe because his previous movie, Poltergeist, had been so commercial (which has more to do with the Spielberg influence than Hooper's), a lot of the audience for Lifeforce assumed Hooper didn't know what he was doing -- that the movie just got away from him. Nope. Tobe Hooper knew exactly the movie he was making. Lifeforce is a crazy movie. It was designed as a crazy movie. It succeeds at being a crazy movie. Had it been released under it's original title, Space Vampires (FUCKING SPACE VAMPIRES!!), the movie might have been better received. A title like that is a little more upfront about what kind of movie one can expect.

A joint American/British space shuttle, The Churchill, stumbles upon a giant alien ship floating in the tail of a comet. Inside are enormous bat creatures, all apparently dead, and three human-looking figures floating in suspended animation. The shuttle brings the three "humans" back onboard before losing contact with Earth.

While everyone on Earth believes that The Churchill was destroyed in a fire, the bodies of the three humanoids are recovered and taken to the European Space Research Centre in London. Before long, the female humanoid (Mathilda May) wakes up and begins draining the LIFEFORCE (see?) out of the staff before escaping into the night, wandering London totally naked. Like with vampires, her victims also awaken, needing to drain lifeforce from living subjects, and the plague begins to spread. 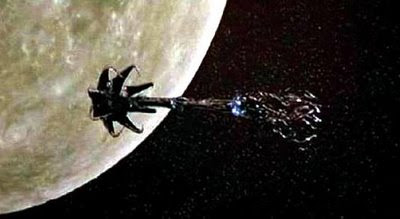 As this is going on, an escape pod from The Churchill is recovered with Colonel Tom Carlsen (Steven Railsback) inside, the only surviving member of the shuttle's ill-fated crew. He explains what transpired aboard the shuttle, saying that the crew had their lifeforce drained by the aliens they found and that he set fire to The Churchill to stop it from returning to Earth with the aliens on board. It seems that Carlsen has become psychically linked to the female vampire, so he and Col. Colin Caine begin searching for her throughout London. Complicating matters is that the vampire has begun jumping bodies, taking over the consciousnesses of strangers and essentially "shape-shifting" into other people.

Meanwhile, London is burning in the throes of a zombie plague...

There's way too much plot to describe in Lifeforce, and the more I try, the more ridiculous it sounds. The script, by the late, great Dan O'Bannon and Don Jakoby, attempts to combine some out-there sci-fi concepts with silly shit like naked space vampires and Halley's Comet. It's '50s pulp meets Nigel Kneale meets '80s excess. Its reach can sometimes exceed its grasp, but it's the reach that matters.

Nowadays, Lifeforce is remembered only for being the movie in which Mathilda May walks around naked. Ok, sure, that's certainly a selling point (as well as a memorable image, because BOI-OI-OI-OINNNNG), but it's also a little bit dismissive -- a way of stopping the conversation about the movie before it even starts by reducing it to a collection of nude scenes and nothing more. In reality, Mathilda May's "costume" is just one crazy element in a movie filled with crazy elements. It's also the logical extension of the sexualized image of the female vampire; after decades of pale women gliding across the moors in low-cut, decolletage-revealing nightgowns, Hooper and company just say "fuck it" and push everything forward. These vampires take your very essence, not your blood, and they don't bury the lede when it comes to seduction. Plus, it was the '80s. Everything was more graphic. 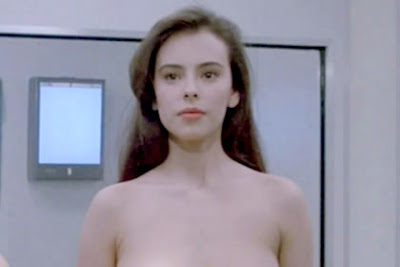 Railsback is not great as the movie's center. As an actor, he has always had a quality like he's an amateur who just wandered on to a movie set. In something like The Stunt Man, that works to his advantage, because he's literally playing an amateur who wanders on to a movie set. In Lifeforce, it's a bit tougher to take. As the movie goes on and his situation grows more and more desperate, his performance gets bigger and more out of control. It doesn't work. It's especially bad in comparison to the cast full of British actors like Peter Firth and Patrick Stewart, who are great at selling the ridiculousness of the movie with a totally straight face.

The back half of the movie is also problematic, as it starts to rely heavily on increasingly silly and convenient exposition (and, yes, that's silly by the standards of Lifeforce, a movie that introduces giant rubber space bats in the FIRST TEN MINUTES). The rules keep changing. Railsback gets to know what's going on at all times, because he just always "sees" what the vampires see and knows what they're thinking. It's a shortcut on which the movie relies way too many times. There are some larger sections that turn into Dogma or Prince of Darkness -- people standing around explaining ideas to one another instead of those ideas being made clear visually.

Of course, that's all offset by the zombie apocalypse that's tearing through the streets of London. You can forgive a lot of clunky exposition if hundreds of people are disintegrating under the glow of a dozen trashcan fires. JB has often suggested that the last hour of Lifeforce feels a lot like a Hammer movie, but he says that about any movie in which people speak in British accents. He's right, though (do not tell him). The way the movie combines horror and sexuality, the operatic feel, the way it tweaks the mythology of the vampire, the way it shifts genres within the same movie -- this is all stuff that Hammer was doing throughout the '60s (and part of the '70s, before things got terrible). Again, this is not a mistake. Tobe Hooper knew what he was doing. If he didn't want to pay tribute to Hammer, he would have just set the movie in the U.S. That's science fact. People need to stop treating Lifeforce like it just happened by accident. 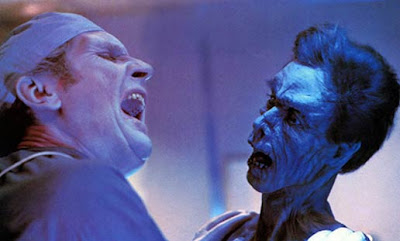 Part of the movie's bum rap might have something to do with studio interference back when it was released. Tri-Star cut 15 minutes out of the movie (including some of the sex and violence, because those things never attract an audience) and ditched large pieces of Henry Mancini's score in favor of a new score by Michael Kamen for the American release of the movie. Is that what undermined the movie's success? Probably not. Yes, the film should have been released in its original form and Tobe Hooper's vision should have been trusted (after the Poltergeist controversy, having his follow-up taken away by the studio was yet another blow to Hooper's credibility), but chances are that Lifeforce was never going to make a killing in 1985. It's just too fucking crazy. So the audiences of the '80s are forgiven for not seeing the movie's value. Everyone from 1990 forward...you're suspect.

The Tobe Hooper of the '80s was a director ahead of his time, and both he and his body of work is way overdue for a reassessment. From The Funhouse to Texas Chainsaw Massacre Part 2 to Lifeforce, he had a run of films post-Poltergeist that were dismissed or panned when they were released, but each of those movies has aged better than a lot of what made a big splash in the '80s. Any one of these three movies is superior to any Halloween or Nightmare on Elm Street or Friday the 13th sequel, but rarely get talked about or recognized outside of their small cult followings. Maybe it's because horror audiences don't always like their movies to be more than one thing, and all of Hooper's best movies are. They mix genres and tones, are both incredibly bleak and very funny. A movie like Lifeforce can be difficult to wrap one's head around in just one viewing. That's not a knock against it.

It's hard to say if it was the failure of his good movies that eventually led to the bad ones -- he lost confidence, or he couldn't get financing or good scripts -- or if the bad ones are bad because he simply lost it. But by the third movie in his Cannon deal, Hooper was remaking Invaders from Mars (a movie that's silly but not altogether terrible) before eventually making junk like The Mangler in the '90s. Lifeforce finds him at the height of his powers both commercially and creatively; the success of Poltergeist gave him the cache to make any movie he wanted and the biggest budget he ever worked with. He took those things and chose to make a movie about space vampires in London. Tobe Hooper is the fucking man.

The great, great Scream Factory! label is going to release Lifeforce on DVD and Blu-ray (the latter for the first time) this summer with a bunch of new special features and both the U.S. theatrical cut and the longer international cut on it. Like a number of titles the label has already released, the movie is finally going to be reassessed -- or, most likely, viewed for the first time by an audience who will wonder why it has never been more popular. Either way, it's about time people start recognizing Lifeforce for what it is. It's one of a kind.

Posted by Patrick Bromley at 7:20 AM