Movies I Love: The Funhouse 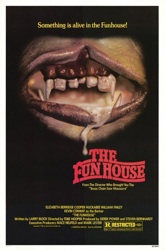 I won't spend a lot of time arguing that Tobe Hooper's 1981 movie The Funhouse is unsung, because JB is the "unsung" guy. But The Funhouse is pretty un-fucking-sung. And I love it.


Warning: Spoilers for The Funhouse ahead.

Though he's something of a brand name and considered a "Master of Horror," Tobe Hooper has made only two movies that get much love and respect. The first, The Texas Chain Saw Massacre, is rightfully considered a classic, albeit one that appeals primarily to diehard horror fans. Poltergeist is his biggest mainstream success (though one could make a case for 'Salem's Lot, but that was a made-for-TV movie) and one of only two movies he ever made for a major studio. The other is The Funhouse.

Poltergeist is great and all, but it's maybe my third or even fourth favorite Tobe Hooper movie. While it's the most successful movie he ever made, I can never forgive it for being the movie that ruined Tobe Hooper's career. The rumors that his biggest box office hit was actually ghost-directed by its writer/producer Steven Spielberg would plague him for decades, all but discrediting him as a filmmaker. Anyone incapable of believing that Hooper could have directed Poltergeist (at least to the degree that he was able to exert some authorship beyond Spielberg's voice) clearly has not seen The Funhouse. From it's excellent widescreen compositions to its sense of playfulness to the way it combines genuine scares with a sense of fun, a straight line can be drawn between The Funhouse and Poltergeist.

I didn't grow up with The Funhouse, but I had seen it once or twice on DVD and never really gave it a second thought. It wasn't until a 2 a.m. screening at the 24-hour Music Box Massacre horror film festival a few years back that my opinions on the movie really began to change. Actually, "form" is probably a more accurate word, since it felt like I was seeing the movie for the first time. And what I found is a gem of '80s horror -- a movie that's colorful and SO MUCH FUN in a genre defined by cynicism and ugliness. More than most of the films I've seen at the Massacre over the last six or seven years, The Funhouse stands out as one of my favorite experiences in the history of that event. Maybe it was just the right movie for the right time, but I've watched it a bunch of times since then (I even imported the region-free Blu-ray release from the UK) and I like it more every time I see it.

Elizabeth Berridge (best known for playing Mozart's wife in Amadeus) stars as Amy, an unremarkable teenage girl being set up on a double date with hunky Buzz (Cooper Huckabee). With their friends Liz (Largo Woodruff) and obnoxious Richie (Miles Chapin, Howard the Duck), Amy and Buzz head out for a night at a traveling carnival where they get high, check out a magic show (featuring William Finley of The Phantom of the Paradise, which is not why I love the movie...but it doesn't hurt), sneek a peek at a strip show and walk through an exhibit of freaks that includes a two-faced cow. The two-faced cow is two-faced foreshadowing. One of the teenagers gets the idea to spend the night in the funhouse (because one of his friends claimed to have done it), so Amy calls home and lies to her parents about where she's going to be for the night. Once they're inside the funhouse for the night, they happen to spy a guy in a Frankenstein mask paying Madame Zena, the carnival's fortune teller (Sylvia Miles), for sex. It's over too quickly, and the guy freaks out and kills Zena. His father, the carnival barker (played by Kevin Conway in one of four different performances), wants to cover up the murder, but realizes that he has been ripped off (Richie stole some money, because he's THE ASSHOLE) and that they are not alone in the funhouse. As is so often the way in '80s slasher movies, the group is then picked off one by one.

What might throw people off -- the reason it's never gotten the respect it deserves -- is that The Funhouse seems like it's going to take sharp turns but is actually totally straightforward. It feels thin because it is. Teenagers dick around a carnival for a while. They go into the funhouse. They see something they shouldn't. A monster tries to kill them. It succeeds in most cases. The end.

Maybe it seems like there should be some sort of twist because the movie keeps playing with horror movie expectations in a way that barely registers on a conscious level. It starts right away, too, with an opening scene that's a sly mashup parodying both Psycho and Halloween (yes, I know, there are a LOT of Psycho parodies, but keep mind this was 1981 and it hadn't been done a million times yet...just High Anxiety?) in which the a young woman is stalked via POV while showering. SPOILERS -- the stalker is actually her brother, and the knife he attacks her with is made of rubber. While it's weird and inappropriate that a young boy is staring at his naked sister in the shower (and by "weird" I mean "hot"), what we have here is a movie that's spoofing horror tropes 15 years before Scream would be credited with reinventing the wheel.

Consider, also, that MORE SPOILERS the naked girl in the shower is our heroine. She is what Carol Clover has dubbed "The Final Girl" -- the Laurie Strode or Nancy Thompson. She's supposed to be the virgin. The prude. We're not supposed to see her naked; we're supposed to see anyone and everyone BUT her naked. And, yet, this break with convention is repeated later on when she and Buzz sneak away in the funhouse to fool around. She is seen topless again, presumably ready to close the deal before they're interrupted by what ends up being a murder. The Final Girl is not supposed to have sex. Amy is doing it wrong (and, yet, SO RIGHT).

But, then, Amy isn't really a typical Final Girl, either. She does not survive by virtue of her plucky determination and can-do spirit. She does not find reserves of inner strength that allow her to go head to head with the monster. Her victory comes down mostly to dumb luck, making her one of the most passive Final Girls in all of '80s horror. Perhaps her Final Girl status was revoked the moment she took her shirt off and she isn't supposed to survive after all, but The Funhouse lacks the mean-spiritedness to kill off all of its characters or put on the stupid tag on in which the killer springs back to life in the final frames and takes Amy down with him (you know, the one every horror movie started stealing after Carrie was released). Even the killer himself subverts our expectations. At first, he appears to be a traditional slasher movie villain and, yet, when the Frankenstein mask finally comes off, there's a hideous Rick Baker monster underneath. It's just another of the ways that The Funhouse is a little different, a little more special than the decade's typical offering. There are nods to monster movies throughout, from the way Joey's room is decorated (he's a Monster Kid) to the clips of Bride of Frankenstein showing on the TV that Amy's parents are watching to the Frankenstein mask that the monster is wearing to the fact that the monster is A MONSTER. It's a horror movie for fans of horror movies.

All of this is in service of a story I know I described as "thin." I don't mean that as negatively as it sounds. Yes, the plot is pretty simple, but unlike, say, any Friday the 13th movie, it isn't just a premise that plays out. The movie unfolds with a kind of nightmare logic: A leads to B leads to C leads to AXE IN THE HEAD. Everything that happens is because of something that came before. Even the goofy shower scene opening has ramifications later on, when Amy's little brother has the chance to help but chooses not to because she threatened him for his incesty prank.

More than anything, The Funhouse lives up to its name. It's a great deal of FUN. ("It puts the 'fun' in Funhouse!" - Gene Shalit, gun in his mouth) It's not mean-spirited. It features a few moments of violence, but they're mostly bloodless (this didn't stop the movie from winding up on the UK's "Video Nasties" list, but it was more than likely confused with a movie called Last House on Dead End Street, which was alternately released as The Fun House). It's a beautiful movie, too, with carefully composed compositions that are saturated with color in every frame. It's one of the best-looking horror movies of the '80s.

I doubt this essay will go a long way towards changing people's minds about a movie they've already written off, and as much as I would love to be partially responsible for restoring the reputation of The Funhouse, most horror fans have decided that it's just one of many forgettable '80s slashers unworthy of a second look. If anything, the upcoming Blu-ray release from Scream! Factory (the new horror arm of the great Shout! Factory) will do more to convince people that the movie is better than they remember than anything I'm able to say. It comes out on Oct. 16. Here's hoping you'll buy it and see for yourself, and that at least some of you will come back and tell me I'm right about this one. I love this movie.
Posted by Patrick Bromley at 7:02 AM