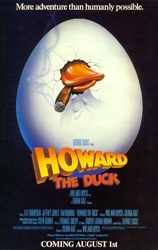 There are a whole bunch of high-profile failures that came out in the 1980s that, once removed from the excesses of the decade and the cultural climate under which they were released, have since been rediscovered and recovered from their initial bomb status. Movies like Robert Altman's Popeye and Elaine May's Ishtar, once lamented as giant, expensive disasters that had no business playing in movie theaters have since been reevaluated and gained a following as transgressive examples of their genres. It may have taken two decades, but the stink of failure has finally worn off and audiences can now appreciate these movies as misunderstood and, dare I say, ahead of their time.

Howard the Duck is not one of those movies.

Howard the Duck is still considered one of the biggest cinematic disasters of all time, most likely because it had attached as producer one George Lucas, whose questionable taste in wanting to bring the character to the screen speaks more about him as a filmmaker than anyone suspected in the late 1980s. Based on the acerbic, cigar-chomping Marvel Comics character of the same name created in 1973 by Steve Gerber and Val Mayerick, the movie became shorthand for "bomb" when it was released in 1986 -- the last thing any studio or producer wanted was another Howard the Duck. It recovered about a fourth of it's $36 million budget and helped kill the possibility of any studio doing another comic book movie (until Tim Burton made it viable again three years later). And, yet, it's one of those movies that a lot of people in the 20s and 30s have seen, because it it ran a lot on cable in the late '80s -- that golden era when all that mattered was that something was on, not so much what that something was. 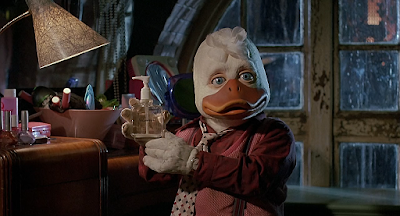 Let's talk for a second about the duck planet where we first find our hero. First of all, it's a duck planet. More important, though, is that it's some kind of Earth II, only everything is duck-focused. There's a poster on Howard's wall for Raiders of the Lost Ark, only it's called Raiders of the Lost Stork or something and everyone on the poster is a duck or duck-adjacent. Here's what I don't get about this: it's not like the movie is suggesting that a secret duck society is living on Earth, aware of our pop culture and then remaking and re-purposing it for the hidden duck population. I think we're supposed to believe that millions of miles away, a planet full of ducks (duck planet) came up with the exact same idea for Raiders of the Lost Ark and then a duck movie studio turned it into a movie starring duck Harrison Ford and then the duck equivalent of Drew Struzan drew a poster and then Howard the Duck put it on his wall because it was also a hit (proof that Raiders is bulletproof and can work with any species). What? And this isn't the only example. Howard is reading an issue of Playduck, which is Playboy for ducks (inspiring the first of two shots within a few minutes of one another in which female ducks expose their human-looking duck breasts, which I think is supposed to be funny but which definitely made me uncomfortable to see as a kid in the '80s). Everything about the duck planet is just like Earth, only with ducks. That's the joke. I don't get it.

Things don't necessarily improve once Howard arrives on Earth, having been sucked millions of miles through space in his recliner for no reason at all. A few people react with horror when they see a four-foot tall duck walking on two legs and wearing clothes. Mostly, though, people are all like "Hey, get a load of this fucking duck asshole," which I would almost believe is meant to be a joke about desensitized culture in Cleveland -- you know, Cleveland, where they've seen it all -- if there was any actual joke. Instead, it just speaks to the laziness of the world that Howard the Duck has created -- or, more accurately, the lack of a world. In the same way that writers Willard Huyck and Gloria Katz couldn't be bothered to imagine any duck planet that isn't just a carbon copy of Earth, they don't seem to be able to imagine an Earth in which anyone has a real reaction to what's happening. It's so much easier for every extra and bit part to say "what's with this duck?" and move along. 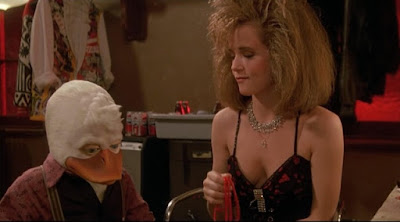 The first half of Howard the Duck is just a variation on this gag over and over: lots of lame extras, ugly punk rock club settings and duck puns. When Howard has to first rescue Lea Thompson from some punks with busy hands (rape punks), he beats them up using "quack fu." That's literally the kind of shit that passes for a joke for 45 minutes of the movie. Things improve a little in the second half, when Jeffrey Jones (playing a scientist) gets possessed by some kind of alien monster and gradually transforms and turns really evil and gets progressively buried under more and more makeup until there's a big laboratory showdown when the monster gets out of him but becomes a huge stop-motion thing designed by Phil Tippet (of RoboCop and Starship Troopers fame) that has to be defeated by a little person in a duck suit and Tim Robbins so that Lea Thompson and her band (which also consists of Agent Judy Hoffs and half of the twin sisters from the long-forgotten '80s sitcom Double Trouble) can perform a song called "Howard the Duck" (written by Thomas "She Blinded Me With Science" Dolby, who wrote all of the movie's music) on stage and be joined by Howard the Duck on guitar. It's only when Howard the Duck begins to embrace its own comic book, sci-fi weirdness that it gets at all interesting, but only in the way that the most passable '80s special effects comedy is watchable. It's not good (though the monster is cool), but it at least develops a little personality. 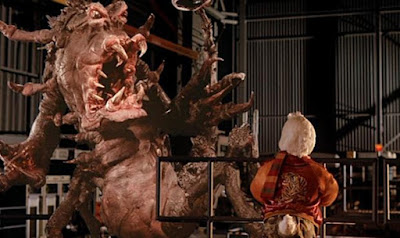 That's what's missing most from Howard the Duck: a personality. The comic book character was a grouchy, sarcastic dickhead; for the movie, he's been toned down so that he's less a sarcastic dickhead and more of a little person in a duck suit. It's a pretty good duck suit, as duck suits go, but both the effect and the characterization remind me of the Ninja Turtles from the Teenage Mutant Ninja Turtles movie. And not the original, even. More The Secret of the Ooze. His voice is all nasal and boring, too. He should sound like Jason Statham, but instead he sounds like Steve Buscemi.

On the retrospective documentary that accompanies the movie on DVD (which finally came out in 2009; it was unavailable until then), the movie's writers talk about how the critical response was brutal and kind of unfair, since it was a movie about a talking duck from outer space and wasn't meant to be Shakespeare. I call bullshit on that, because just because your movie is about something silly does not excuse it from being the best possible version of that silly thing. Just because your movie is called Snakes on a Plane does not mean that I should be expected to be satisfied simply because you show some snakes and at least one plane. You have to make an entertaining or interesting movie about snakes that are on a plane. Because I did not lower my expectations enough to enjoy your failure of a movie should not be written off as a character flaw on my part. 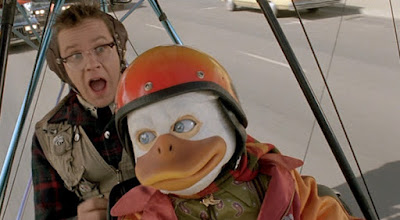 I never really had any affection for Howard the Duck, and seeing it again for the first time in over 20 years, I understand why. It's not good. I could enjoy parts of the second half in the way that I enjoy the science fiction comedies of the 1980s, but that has more to do with me than with anything working about the movie. It's definitely not one of the worst movies ever made, though. It's just misguided, and for a movie with so many bizarre elements it's really lacking in imagination. It's a pretty boring talking duck from outer space movie, and there are just too many of those in the world.
Posted by Patrick Bromley at 12:06 AM