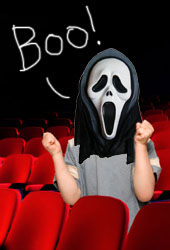 At long last ... #ScaryMovieMonth! "Yay!" -you. And, much like last year, I'm going to focus on some trailerz from horror films past. This week: SLASHER FLICKS! Not the best, or even my personal favorites. Just a handful that I wanted to feature. Why? Because this is my damn column and I can do what I want!

While technically not the first slasher movie (that's last), Halloween reinvented the genre/broke the mold/set the tone/other clichÈs that changed HORROR MOVIES FOR EVER (or some other platitude). But seriously, this is one effective, scary, inventive, unique film. I'm not going to sit here and tell you the history of the movie or why you should see it (that's been done better on this website here); I'll just comment on the trailer. There's something charming about these old previews -- they don't tell you much, they're poorly edited (almost as an afterthought) and they're LONG. Regardless, that John Carpenter synth score and shaky POV cam make me want to watch it RIGHT NOW. But I can't! Because I'm not by my TV! #FThisMovieProblems

"You've made it through Halloween, now try and survive Christmas!" Hilarious concept that I completely stand behind. Because holidays are about trying not to get killed. A homicidal Santa (is there any other kind) terrorizes a small town. In this preview, I especially love all the reaction shots from the nutcrackers. They're exposed to SO MUCH AX MURDER (and a wussy handgun kill), when all they want to do is crack some nuts. C'mon, Santa -- cut those nutcrackers some nutcrackin' slack! Believe it or not, F This Movie!'s own Erika LOVES this movie (and wants to have a million of its babies). She used to watch it a lot at sleepovers in the '80s and '90s (same with Sleepaway Camp). Just one more reason why every F-Head should covet Patrick's wife.

I watched this again two #ScaryMovieMonths ago (my new [and only] unit of time measurement -- for example, I first met my wife over five #ScaryMovieMonths ago ... and she still doesn't like scary movies. WHAT IS UP WITH THAT?), and BOY is it a piece of shit. Riding the wave of that new cool-teen-hipster-ironic-slasher-movie trend (popularized by the MUCH better Scream), I Know What You Did Last Summer basically barfs all over your eyes and face with bad acting, hairdos, attitude and plot. The only thing it has going for it is Jennifer Love Hewitt at the peak of her hotness (Heartbreakers, anyone?). And, despite the fact that I wrote a song in college about her being my girlfriend, that's not really saying much. #PartyofTwo

Perhaps the best thing to come from the whole Chucky phenomenon was this EXCELLENT Simpsons "Treehouse of Horror III" segment (also spoofing Gremlins) about an evil Krusty doll, "Clown Without Pity" (excuse the HORRIBLE quality [and, really dude? You can't center the camera on the TV?]). Re: the original Child's Play, it never really registered for me, probably because my parents were too cheap to buy me a My Buddy doll (which I have to assume is what this movie was based on). The sequels (five total!) got more and more ridiculous, and have developed a cult following of their own. Thank god for Jennifer Tilly.

The great (sure!) Adam Green writes and directs this super fun slasher movie. And it is a "fun" (you know what I mean) film (if you don't mind TONS of gore). Don't let the serious tone of this trailer fool you -- it's a GARBAGE preview, piggybacking on the themes and tropes of the slew of late 2000's torture porn franchises (Saw comes to mind). Kane Hodder (yes, that Kane Hodder) plays Victor Crowley ("Mister!"), a throwback villain in the vein of Michael Myers, Jason (i.e., Baghead), Leatherface, et al. I'm surprised this film isn't more popular with horror movie junkies. I mean, yeah, I guess it's popular enough -- it did spawn a sequel -- and Mr. Green is still working, so that's good. If you haven't seen Hatchet yet, what are you waiting for?

The granddaddy of them all! What a legitimately terrifying, creepy trailer! I really need to watch this again. RIGHT NOW. Sorry Halloween.
Posted by Patrick Bromley at 6:49 AM