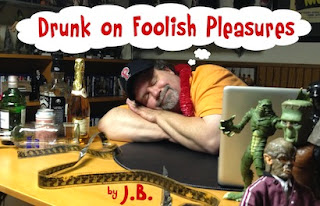 Now that it has been pointed out to me that the original 1972 Poseidon Adventure is actually pretty great, my favorite “bad” movie will forever be novelist/he-man Norman Mailer's 1987 crime dramedy Tough Guys Don't Dance. This movie is incredibly entertaining to watch, and is as appropriate a movie as there will ever be for a column titled “Drunk on Foolish Pleasures” since most, if not all, of this film’s characters are drunk for the entire length of the movie. The screenwriter, director, and most of the actors may have been drunk on the set during filming, too. It certainly seems that way.

Just ask Norman Mailer. In his considered worldview, drinking makes you a man… so does fighting… and so does not being gay. Tough Guys Don’t Dance is the work of a man who has had one too many testosterone injections directly to his groin. This movie’s screenwriter seems to be every boy who ever bullied me in high school; its director seems to be a sociopath. Both men are Norman Mailer. Tough Guys Don’t Dance is Norman Mailer’s first swing at directing a big-budget Hollywood film. Mailer managed to sweet talk our beloved Cannon Films in the go-go 1980s into green-lighting this adaptation of his then-current bestseller. His maiden directing effort was the low-budget, self-financed Maidstone, which resulted in a shooting (not a shooting of film, mind you—someone was actually shot on set during the film’s production).

The plot in brief: Amateur yachtsman and professional alcoholic Tim Madden (Ryan O’Neal) awakens from a particularly nasty blackout and finds himself plunged into a tale of adultery and intrigue: bags full of weed, bags full of human heads, and himself constantly half in the bag. Add more than a dash of scenery chewing from all sides and you get this sly parody of Harold Robbins/Douglas Sirk-style melodramas. Right? I mean it has to be a sly parody, right? You cannot tell me that the filmmakers took this piece of shit seriously.

We have spoken at length on this site about films reaching a stage of crazy delirium. As film lovers we all eagerly await that moment where the movie goes off the tracks; we have all seen so many “ordinary” movies that we crave the unique, the bizarre, the unexplainable. This film hits the crazy mark five minutes in—and never stops getting crazier! Give me films like this, full of insane bullshittery—at least this film never skimps on the passion, even though it is the passion of the religious zealot, the lapsed alcoholic, and the hopelessly mad.

When it is over, you know that you have seen SOMETHING.

Check out the trailer, featuring angry troll Mailer, reading from supposed preview audience cards that he probably wrote himself. Note how he seems to relish the negative ones:

The character names dreamed up by Norman Mailer are all part of this revelry, a fever dream of cornpone and bourbon and racial stereotypes: Police Captain Alvin Luther Regency, Patty Larreine, Dougie Madden, Wardley Meeks III, Big Stoop, Spider, Bolo, Finney, and Stoodie. Those last four sound like some kind of low-rent Southern law firm (“Hello, this is Spider, Bolo, Finney & Stoodie, Attorneys At Law. How may I help you? No, I’m sorry—Mr. Stoodie is at lunch with a client.”) You keep expecting to meet a character named "Grits" or “James Crow” or "A. Southern Man."  This is a film about the South written by someone who has never been south of Boston.

FULL DISCLOSURE: Tough Guys Don’t Dance does feature Isabella Rossellini, radiantly beautiful as ever—and just as bad and over-the-top as everyone else.

A popular urban legend that makes the rounds of my school district concerns the district administrator whose daughter is prominently featured in this film. Papa was so proud of his daughter that he invited all of his coworkers to a screening to celebrate her first big-budget, big screen outing. Seems Dad did NOT know in advance 1) what the hell kind of film this was, 2) what the hell kind of character his daughter would be playing, 3) what the hell kind of dialogue would issue from her mouth, or 4) the copious amounts of nudity involved in the part. Needless to say, Daddy was embarrassed, and a planned post-screening party was scuttled because all the guests were completely mortified by the film.

I think though that Dad should have been LESS embarrassed by his daughter's nudity, which is, shall we say, impressive, and MORE embarrassed by her performance, which reaches some sort of apex of bad acting. At times the poor girl seems to be playing a sentient ape, playing a female impersonator, playing Bettie Davis playing an uppity Southern Belle. This is a performance for the ages, a PERFORMANCE in all capital letters. Ladies and Gentlemen of the Academy... for your consideration… Debra Sandlund.

And in this we find further proof of just how confused and confusing her performance is: in 1987 Debra Sandlund was nominated as Best Supporting Actress for the Independent Spirit Award, and WORST Supporting Actress at the Razzie Awards. She lost both. Further further proof? She doesn’t even work under that name anymore – her subsequent acting credits are as “Debra Stipe.”

Tough Guys Don’t Dance also features dialogue that sounds like it was penned by a crazed fourteen year-old high on modeling glue – though it actually comes from the twisted mind of Norman Mailer. This nutty dialogue reaches its nadir in a scene where, after his character receives some very bad news, star Ryan O’Neal is called upon to repeat the words “Oh man! Oh God!” over and over again. This would be a test for the best of actors, and as we all know, Ryan O’Neal is far from the best. Apparently, this video clip and sound bite have become something of an Internet meme. I would say that we could turn this clip into some sort of drinking game, but I think Ryan O’Neal already has.

Some other choice scraps of dialogue I delight in rolling over on my tongue:

LAURENCE TIERNEY: “Six months ago, they told me to stop [drinking] or I was dead. I stopped. Now the spirits circle around my bed and they tell me to dance. I tell them, ‘Tough guys don't dance.’ They answer me, ‘Keep dancing.’”

ISABELLA ROSSELLINI: “My husband gives me six orgasms a night. That’s why I call him MISTER SIX!”

Oddly enough, there were several versions of this scene filmed. In the trailer, Rossellini says “five.” Overseas, Rossellini says “sixteen!” I once heard this bit of dialogue replaced on a network television broadcast with “Mister Three!” Apparently, it wasn't the orgasms themselves the network objected to, but the sheer number that the Wings Hauser character offered his new bride that offended their delicate sensibilities. Later in the film, Rossellini corrects herself:

WINGS HAUSER: (slurring from a stroke) “But I gave you six orgasms a night!”
ISABELLA ROSSELLINI: “None of them were any good.”

JOHN BEDFORD LLOYD (holding a gun on O’Neal’s character): “Madden, take it [he means his penis] in the mouth or you'll die. Will you take my pride and joy [again, his penis] into your mouth?” To be fair here, Lloyd seems to be the only actor in this godforsaken mess who actually knows what sort of film he is in and seems to be enjoying himself immensely.

The last line of dialogue illuminates the soul of Normal Mailer. Much like the films of Ed Wood (which Tough Guys Don’t Dance resembles in its dialogue and characters) the film is worth seeing for what it tells us about its creator. Norman Mailer is obsessed with being a man. He has an old school, “guts and glory” definition of masculinity that comes off as ironic and excessive when splashed across the big screen. According to Mailer, men want only to drink, curse, and screw. They chop people’s heads off. They cuckhold other men. They black out and forget that they have chopped people’s heads off. They overact until they give themselves strokes and seizures. Their worst nightmare is to have someone put something in their mouths that they do not want to have there. That’s the only reason Wardly Meeks III is the villain—he is not a real man.

At times Tough Guys Don’t Dance resembles a fantasy “man’s man” film that I have often imagined. That film would star John Wayne, Mel Gibson, and Steven Seagal. That film would feature a script by Norman Mailer (with last-minute rewrites by John Milius) and be directed by Sam Peckinpah. It would be titled Whiskey and Balls.