Review: Thanks for Sharing 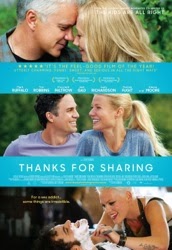 Here's what happens when sex addiction meets the sitcom.

I'll say this for Thanks for Sharing, the new ensemble comedy about people recovering from sex addiction: it means well. That's important for a film about damaged, self-destructive people. How could we take any of it seriously if the movie isn't willing to meet us on those same terms? So that's good. But the movie is directed and co-written by Stuart Blumberg, who previously wrote The Kids Are All Right. It should come as no surprise, then, that the two films share a lot of the same problems, combining believable, sometimes sticky character drama with sitcom simplicity.

Mark Ruffalo plays Adam, a successful businessman (he does something with environmental causes), who has been sober for five years. His addiction defines his life: he won't use the internet, he has the TV removed from every hotel room in which he stays. It's a struggle, but things are going along just fine -- until he meets Phoebe (Gwyneth Paltrow) at a party and the two hit it off immediately. He's not sure if he's ready for a real relationship. He can't even remember how to have sex with feelings involved. And he's not ready to tell Phoebe about his addiction for fear that she'll run the other way. 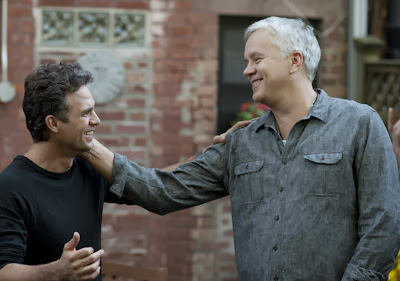 His sponsor is Mike, a former alcoholic and sex addict who lives his life spouting maxims and phrases he's acquired through 15 years of meetings (one of the screenplay's better touches). Mike's son (Patrick Fugit), himself a former drug addict, shows up after a years-long disappearing act and promises that he's clean and changed, but Mike has a hard time believing it. Complicating things even more is the resentment his son feels while watching the time and attention Mike is willing to give to those in the program. All of that stuff rings true.

The third storyline focuses on Neil (Josh Gad), a young doctor still in the throes of his addiction. He's been court ordered to attend meetings after getting busted for groping women on the subway and doesn't seem to take any of it all that seriously

He becomes a friend and de facto sponsor to Dede (pop star Pink, acting here under her real name Alecia Moore and proving to not be the worst), a former drug addict and sex addict who only knows how to relate to men by sleeping with them. There is potential here for a very sweet story about the unlikely platonic friendship that these two form, but Blumberg would rather turn every one of their scenes into a joke. Usually one about Josh Gad's weight. He can no longer take the subway (it's gotten him into trouble), so he has to run a lot. And that's funny, because he's overweight and therefore sweaty. Then he gets to ride a bike, which is also funny because he is overweight and runs into cars. Later, they go to a dance club, which is funny because he is once again sweaty. I assume you get the joke.

Thanks for Sharing is at its best when it stays on message: every day is a struggle for these people. Blumberg's screenplay (co-written by Matt Winston) takes sex addiction seriously, which is the best thing that can be said about it. It's not a serious, dark-night-of-the-soul examination of out of control behavior (those looking for such a thing would be better off watching Steve McQueen's Shame and deserve what they get), because Blumberg is still very invested in making sure the audience is entertained and, more importantly, that they like these people and this movie. And there is a lot to like -- the cast is obviously very appealing and does their best not to completely scrub away their ugliest tendencies; it's even suggested that Paltrow's character has some issues, though the movie blows it by making them explicit and then punishing her for it. It's a well-made movie with some nice directorial touches. But it can also be clumsy and broad. That's a shame, as the nuances works best. 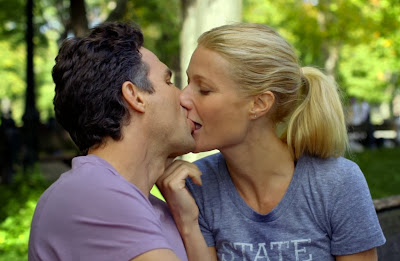 The scenes between Paltrow and Ruffalo are among the more problematic in the film, not because the actors aren't up to the task (they are) or because they don't have any chemistry together (they do). It's because Blumberg and Winston write so much of their dialogue like it's a late-'90s romantic comedy -- all too cutesy and clever by half. They are not relating to one another as people so much as writer's constructs. As the movie progresses, though, the screenplay is very straightforward in acknowledging some real difficulties for Paltrow's character -- more of that honesty of which the film could use more. I appreciate a movie willing to avoid saying "Hey, it's just one more obstacle that we can overcome, because we are attractive movie characters who like one another." Some obstacles can't be overcome. Some people aren't interested in relationships with this kind of obstacle.

When the movie isn't shying away from some of the truthful aspects of addiction, it works. Too often, though, it chickens out. A particular scene with Ruffalo -- one of the darkest in the movie -- starts out ugly and only gets uglier. It could have become a moment of healing for him and a newly introduced female character. Instead, it becomes a plot contrivance to put him and Josh Gad back in the same room so that an earlier reference to E.R. can be paid off and Gad can score a cheap laugh. 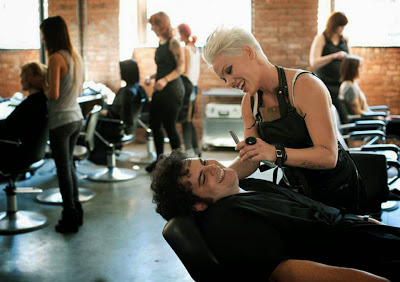 That's where Thanks for Sharing runs into the most problems: it wants to take addiction seriously, but it also wants us to chuckle through the whole thing. I'm not saying it's impossible to do both, but Blumberg's film has a two-pronged problem: the comedic bits butt up uncomfortably against the more serious stuff, undermining the impact just when it starts to pick up steam and b) it isn't funny. Funny will excuse a lot. Funny will compensate for shifts in tone. But funny has to be funny.

Thanks for Sharing is smart enough not to "cure" its characters, only to suggest that there is hope. But it will take work. This isn't a movie about lives changing. People make mistakes. They have setbacks. They continue to struggle. It's a movie that's capable of being honest and intelligent about a lot of things, but can't resist the urge to try warming our hearts with non-laughter. There's enough here to like, but the movie keeps undercutting itself.
Posted by Patrick Bromley at 11:50 AM