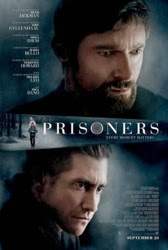 Here's a movie I was really dreading that turned out to be one I really liked.

In many ways, Prisoners, the Hollywood debut of director Denis Villenueve, is the movie I feared it would be: grim, grimy, positively allergic to sunshine, constantly carrying the weight of grief in its gut. All of the trailers made it seem like something I would never want to see, as I've grown far more squeamish towards movies in which little kids are taken or harmed since having a couple of my own. And while I certainly like all of the people involved, it was a task to get myself to the theater so I could sit through what I assumed would be an epic of sadness porn.

But Prisoners is also something very different than what I expected. It's not just Mystic River Redux, with Hugh Jackman in full-on INTENSE mode screaming about "MY DAUGHTER!!" It's actually more of a mystery thriller, and a pretty good one for most of its running time. It takes a couple of compelling characters down several seemingly unrelated paths, and it's only when those paths begin to converge that the movie threatens to buckle under the weight of its own coincidence. The fact that both the filmmakers and the actors salvage what could have been a deeply problematic last act is a testament to just how accomplished Prisoners is. 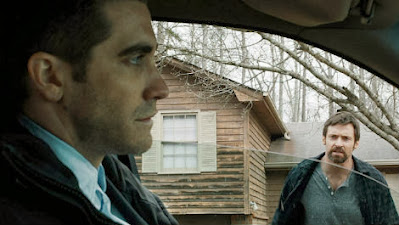 The plot is pretty straightforward: Jackman plays Keller Dover, a carpenter and survivalist raising two kids with his wife (Maria Bello). They go to the home of the Birches (played by Terrence Howard and Viola Davis) to celebrate Thanksgiving. The two youngest girls ask to go outside. They do not come back. The police are called, and the unfortunately named Detective Loki (Jake Gyllenaal) takes the case. The only lead anyone has is a mysterious camper driven by a man (Paul Dano, ever the creep) who may or may not have been capable of committing a crime. When the cops are forced to let him go for lack of evidence, Keller decides to take matters into his own hands.

That's the basic setup, and it's everything that's promised in the movie's marketing. Gradually, though, the movie takes on a different life, introducing new elements and pushing its characters in unexpected directions. It's easy to imagine a movie studio-friendly version interested only in Keller's choice between damnation and redemption, but that's not this movie. While the film certainly raises some moral dilemmas -- how far would you be willing to go if it means getting your child back? -- it's not all that Prisoners has on its mind, and the movie is richer for it.

One of the things that's best about Prisoners is that the screenplay (by Aaron Guzikowski, whose only prior credit is Contraband, so let's consider this a BIG step up) doesn't go overboard with the character exposition. Yes, it is hinted that Keller used to drink, multiple references to his survivalist mentality (complete with fully stocked basement) and a number of allusions to his devout faith, but the movie never beats you over the head with any of it. I kept waiting for some mention of the fact that he had done time (all the other clues are pointing in that direction) or some huge admission that would lay on his instability or potential for violence thick, but it never comes. The filmmakers respect the audience enough to let them piece the characters together based on the information they are given. 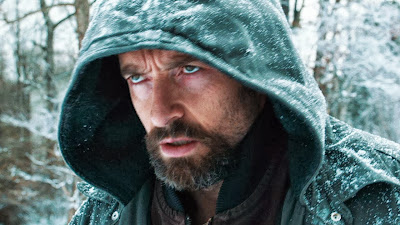 Jackman is pretty good playing against type, though the script sometimes asks more of him than he's able to deliver; it might have been more interesting to see another actor who seems truly capable of doing some of the dark shit that Jackman threatens to do. But he's certainly fine, and it almost doesn't matter because half or more of the film is dedicated to following Gyllenhaal's unfortunately named Detective Loki as he relentlessly tries to break the case even in the face of a parade of obstacles. He isn't given any back story at all (save for one seemingly throwaway line about where he lived as a kid), and both the character and the performance are all the better for it. It's in the tattoo we see on his neck, which he mostly covers by buttoning his shirt to the very top. It's in the way he twitches and blinks too much, deprived of sleep and running on only caffeine and adrenaline. Loki comes across as a guy who's very smart and more than a little unpredictable -- the kind of cop who could easily have been a criminal if things had gone just a little differently. Every time Gyllenhaal is on screen, the movie is better.

There's plenty else to like, too. The bench of supporting actors, which includes heavy hitters like Maria Bello, Viola Davis, Terrence Howard, Melissa Leo and even Paul Dano (all of you Paul Dano haters will likely enjoy the way his character is punished in the movie, even though you probably shouldn't), all make the most of their limited screen time. The score, by the (fortunately named) Johan Johannsson, is subtle and effective. Roger Deakins shot the movie, so you know it looks fantastic -- he's able to make even grey skies, slushy driven snow and dilapidated buildings look beautiful. One of my favorite shots comes in the first third, when Jackman's character is first searching for his missing daughter in the thick of woods that swallow the entire town. His flashlight illuminates a couple of trees right in front of him; beyond that, total darkness. There is such hopelessness in that single image, which is on screen in only a few seconds. Deakins sells us on the plight of these characters -- he puts us right in their shoes -- with just that shot. 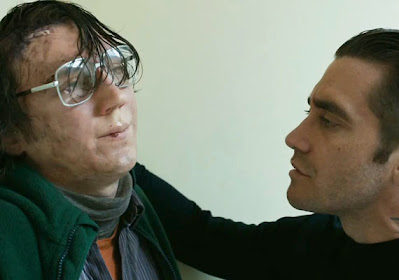 The movie is long. At two and a half hours, it may test the patience of some viewers. Villenueve seems to be reaching for the scope of a masterpiece like Zodiac (a movie I thought about a lot during Prisoners, and not just because Jake Gyllenhaal is in both) but told on a much more intimate scale. Part chamber drama, part police procedural, part tragedy, part mystery, the movie does a lot of things and does most of them well. Like a ghost story that runs out of air as it resolves, Prisoners gives us a lot of compelling threads that disappoint as the filmmakers begin tying them together -- the questions are a lot more interesting than the answers. Some of them feel obvious, others impossible. At the same time, there are implications that some of these events were set in motion years -- even decades -- ago, which gives things a kind of haunting weight. Yes, the movie is bleak, but not unrelentingly so. Unlike a lot of Hollywood movies (particularly star vehicle dramas like this one), not every loop is closed, nor question answered by the end. There are things to think about and, better, talk about on the drive home from the theater.

This one came out of nowhere for me. I was surprised at what a skillfully made, engrossing movie it turned out to be. It's nice to be pleasantly surprised, even by a film this dark.
Posted by Patrick Bromley at 7:43 AM