Drunk on Foolish Pleasures: The Blob! 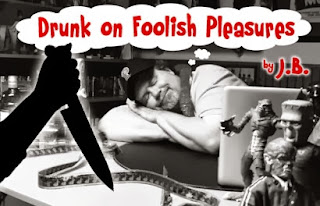 It creeps, and leaps, and glides, and slides across the floor
Right through the door, and all around the wall
A splotch, a blotch… be careful of …

I unabashedly love the original 1958 Blob. I do not love it ironically or half-heartedly. My pulse quickens when I hear the its theme song; I think that the fact that this ditty was a worldwide hit was partially responsible for raising this modest, independent production from its spot on a double bill with I Married A Monster From Outer Space to the renown and reputation it enjoys today. The fact that it was an early starring vehicle for Steve McQueen does not hurt, either.


Need a non-musical endorsement? None other than The Criterion Collection has released this film on laserdisc, DVD, and Blu-ray! So suck it, you miserable Blobophobes.

The plot in brief: Hot-rodding teen Steve (Steve McQueen) is out on a date with his best girl, Jane (Aneta Corsaut) when they see a fiery meteor fly overhead. The meteor lands on the outskirts of town, where a local ne’er-do-well (Olin Howland) is just dumb enough to poke it with a stick. The meteor breaks open, revealing a gooey red mass (The Blob) that quickly gets to work dissolving the old man’s arm. Steve and Jane rescue the old man and take him, arm still covered in goo, to the local doctor.

Doctor Hallen (Stephen Chase) attempts a surgical de-Blobbing, but to no avail. The gooey mass “digests” the old man and continues to grow. Steve and Jane rush off to summon the authorities. The Blob eats Doctor Hallen and his equally delicious nurse.

The police do not believe perennial troublemaker Steve; they think he is playing a prank. Several more townspeople are eaten. The Blob makes an appearance at the local movie theater, interrupting a midnight horror show. The Blob continues down the street and envelopes the local diner, which is unfortunate, as Steve and Jane, along with Jane’s footie-pajama’d little brother, are trapped in the basement.

Will the police finally believe that Steve is TELLING THE TRUTH?


Jack Harris, the film’s producer, provides a commentary track on the Criterion disc that is nigh impossible to listen to. He is an older man who, based on his raspy basso-profundo voice, has smoked five packs of cigarettes a day since the day of his birth. Throughout my viewing of the film, I kept clearing MY throat, hoping it would help him.

Harris actually shares said commentary track with film historian Bruce Eder, who should have been allowed to go it alone. Eder observes that The Blob is a home movie “not of who we were in 1958, but who we thought we were.” Like every vintage film, The Blob succeeds as a documentary snapshot of its time (“Watermelon, 4 cents per lb” says the market sign—and just look at those cars!), but then goes beyond this to reveal the attitudes and values of its time as well. This is small-town life at its hokiest. The amateurish quality is part of its charm. 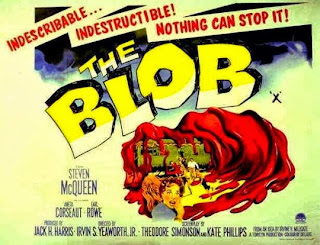 The Blob also says a lot about human beings, not just in 1958, but now and forever. The old man at the beginning of the film pokes the meteor with a stick. When the meteor breaks open, revealing its gooey insides, he proceeds to POKE THE GOO with a stick! That’s what any of us would do. Oh, do not lie to my face and tell me that you would do the “right” thing – leave the meteor unmolested and fetch the authorities. Every single one of us would poke that goo with a stick. We would! It is what makes us human, and horror films are all about exploring what makes us human.

One of the reasons horror films work so well (and will continue to be made into infinity) is that we are so stupid as a species they will never run out of raw material.

We here at F This Movie! have been talking at great length recently about affection for films from one’s youth and the lingering effect of the conditions that accompany a first screening. I saw The Blob when I was very young, and it really got to me. It got to me as an eight year old, and it still gets to me as a 51 year old.

The scene in The Blob that effects me the most – the scene that no amount of hipster-douche laughter can destroy – is late in the film, in the diner, when Steve and Jane think they will never make it out alive. There is not a hint of condescension or irony in this scene—it is played straight and to great effect. Steve tries to comfort Jane’s little brother, and Jane begins to cry.  They really believe that they are going to die.

We might call this trope the “Intense Solemnity of Imminent Death” (ISID). The diner basement scene in The Blob is a rarity in 1950s sci-fi and horror films, which usually seem more intent on the spectacle of carnage than on its aftermath. The original War of the Worlds plays the ISID card well; a scene late in that film set in a church is almost impossible for me to watch. The recent Gravity played with the ISID concept and does it well.

Clearly one of the dubious merits of horror films is that they prepare us all for the inevitable, and in this single scene The Blob does that better than most. There is a similar scene in Toy Story 3 (both involve fire); in both scenes, the filmmakers let the action play for so much longer than seems necessary that the audience genuinely begins to wonder if the films are about to sacrifice all of their protagonists. 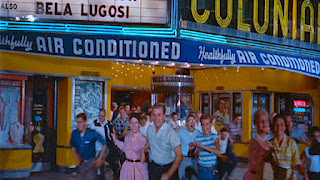 Since 2000, Phoenixville, Pennsylvania hosts an annual "Blobfest,” the highlight of which is a re-enactment of the scene where moviegoers run screaming from the theater. Chef's Diner has also been restored and actually allows people to go into the basement!

The Blob itself was silicone, with more and more red dye added as it ate more and more people. In 1965, collector Wes Shank bought what was left of the Blob silicone from the film’s producers. He ran tours through the town, let people stir the bucket of goo that was The Blob, and even penned a book, From Silicon to Silver Screen, Memoirs of The Blob. 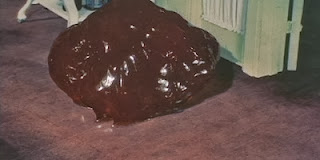 Finally, I love how, in the film, all the townspeople pick on Steve because small-town life is a bore and they have no real enemies to fight. When The Blob shows up and starts to kill them, everybody wises up as to how good they had it before and how Steve is actually a cool, resourceful guy. I identify with Steve (and not just because of my uncanny resemblance to McQueen) I wait with baited breath for a real Blob to show up in my town, so that my wife, son, friends, and students will realize by comparison HOW NICE I REALLY AM.