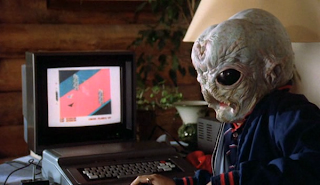 Last year after his annual trip to Wonderfest in Louisville, JB wrote about being a Monster Kid -- someone who fell in love with monsters at a young age and continues to love them to this day. All of us who look forward to Scary Movie Month all year long are Monster Kids, too, but we are so seldom represented on film. That's especially puzzling because the directors who make horror movies are often Monster Kids themselves.

Occasionally, though, one makes his or her way to the big screen. Here are five of the best Monster Kids in horror movie history: 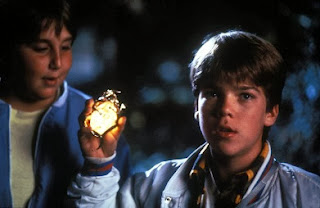 1. Sean Crenshaw, The Monster Squad (1987) - The quintessential Monster Kid, Monster Squad's Sean (Andre Gower) is the best equipped kid on this list because he's the only one who believes in monsters even BEFORE they start showing up. From his daily "Monster Club" meetings to his t-shirt that boldly declares STEPHEN KING RULES (making him a childhood hero of yours truly), Sean does not fuck around when it comes to monsters. It's an obsession that serves him well; his knowledge and his belief make him mankind's only defense against the threat of real monsters. What was previously seen as a juvenile distraction is the very thing that gives him the tools to survive -- a common thread among cinematic representations of Monster Kids. Maybe it's because we all want to believe that this knowledge we've built up from years of watching horror movies is going to have a practical use someday. You know, like a monster attack. 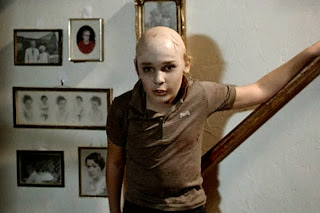 2. Tommy Jarvis, Friday the 13th: The Final Chapter (1984) Monster Kid Tommy Jarvis (Corey Feldman) has the distinction of being the person who finally killed Jason Voorhees -- for a little while, at least. This monster movie enthusiast is able to take down the Man in the Mask because he understands the psychology of the monster -- he shaves his head (and puts on eyeshadow?) to look like First Jason and distracts him long enough for the killer to get a machete in the face. When that doesn't quite get the job done, Tommy goes to town and hacks away at Jason Voorhees enough to make up for four movies' worth of teenage death. Of course, it comes at a price: the final image of the movie suggests that Tommy's encounter has driven him crazy, and that the Monster Kid may become the Monster. Two more movies would focus on Tommy Jarvis and throw away this concept with total disregard, but the Tommy Jarvis of The Final Chapter is the best character in the entire franchise, and a big part of why Friday 4 is the best movie in the series. Rumor is that the character was modeled on special makeup effects designer Tom Savini (right down to the name), who returned to the series to kill Jason Voorhees once and for all. Or so he thought. 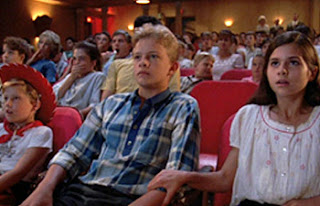 3. Gene Loomis, Matinee (1993) Gene's love of monster movies doesn't prepare him to battle with real-deal monsters, because Matinee isn't the kind of movie in which the real deal shows up. Mostly, all of Gene's monster movie knowledge lets him get closer to Lawrence Woolsey (John Goodman), a William Castle stand-in whose latest monster movie, MANT!, is making its premiere (in Atom-o-Vision!) at the local theater. When Matinee begins, Gene's monster movie obsession makes him an outcast among his peer group; by the end he's a hero, saving his little brother from falling off a collapsing balcony and, at one point, becoming what he thinks is the Earth's last surviving man. The events of Matinee confirm what those of us who love the movie already know: Monster Kids are the coolest. 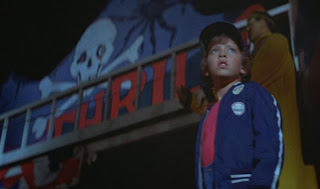 4. Joey Harper, The Funhouse (1981) Unlike the other Monster Kids on this list, Joey Harper is a dick. I mean, not totally, but he's not the hero and makes a lot of dick moves -- including busting in on his naked teenage sister in the first scene and scaring her with a rubber knife while she showers. Also, he doesn't even try to help when she and her friends are being attacked and murdered by a homicidal monster. You know, dick moves like that. To be fair, his older sister did promise she would "get him back" for the shower business, so I guess his fear of her recourse justifies letting her die, right? Up to that point, he's a pretty great movie Monster Kid -- his room is covered in Universal Monster posters, he has a collection of rubber masks and an obvious affection for Psycho. He also seems a little sad and lonely wandering around the carnival all by himself, and believably scared the way a kid would be when he realizes he snuck away from home and is now all by himself. He's also a Monster Kid in a movie made by Monster Kids, so's he's the only character to make it out ok. 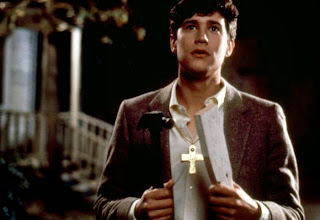 5. Charlie Brewster, Fright Night (1985) Charlie Brewster (William Ragsdale) wins the hearts of horror fans and proves his worth as a Monster Kid in his very first scene of Tom Holland's great Fright Night: he's making out with his girlfriend, but keeps trying to sneak a peek at the TV showing an episode of "Fright Night," the weekly creature feature hosted by his idol, washed up horror actor Peter Vincent (Roddy McDowall). He would rather watch a horror movie than get lucky! Who among us has not face a similar dilemma? Just kidding. Most of us only had the "horror movie" option. AS IT SHOULD BE. But Charlie Brewster is like the synthesis of Gene from Matinee and Sean from Monster Squad -- he's a horror movie nut who gets to befriend a real-life icon, but who also uses the knowledge built from years of watching monster movies to kill some real fucking vampires. PLUS he does eventually get lucky. We all want to be Charlie Brewster. He's so cool.
Posted by Patrick Bromley at 7:46 AM