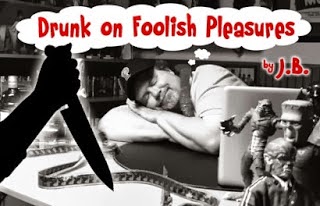 This past weekend I went to Universal Studios Hollywood – the first time I’ve visited during Scary Movie Month. It got me to some excessive ruminating. 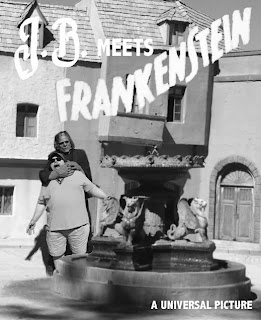 Loyal F This Movie! readers/listeners know about my love for the original Universal Monsters. Well, I just returned from a pilgrimage to their birthplace – Universal Studios Hollywood – and the theme park the studio has built there.

My first visit to the park was almost twenty years ago; at that time, I was a little surprised that the studio seemed almost embarrassed about its single greatest contribution to film history. On that visit, our guide for the famous tram tour actually commented, “Yeah, back in the, like, twenties? Universal couldn’t, like, afford? The big stars? So that’s why they had to make horror movies? Because, like, they could get anyone to wear the make-up?” 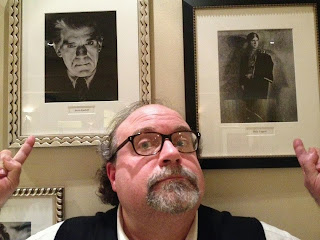 It may have taken a couple decades, but Universal now seems proud of the monsters: their images are all over the theme park. At one point on the current tram tour, visitors pass posters for films that Universal regards as their “landmarks” – and more than half of the posters are for horror films. In 2007, the studio opened a walk-through attraction called Universal’s House of Horrors, a beautifully detailed haunted house where actors dressed as Nosferatu, the Mummy, Chucky, Ygor, and the Wolf Man jump out at tourists (those are the ones we saw; I can imagine how the Phantom of the Opera, Norman Bates/Mother, or Frankenstein’s Monster could be worked into the mix.) The attraction also features a life-size mock-up of the laboratory from the finale of The Bride of Frankenstein.

In short, it’s heaven. It’s just the right amount of scary. At the entrance there is even a nice little tribute to Jack Pierce, who created all of those iconic make-up effects in the thirties. Halfway through the attraction, visitors cross a bridge that is surrounded by a swirling miasma meant to recreate Larry Talbot’s fevered wolf dream in The Wolf Man; it also inspires major vertigo. Frankenstein’s monster hangs around outside the attraction and takes pictures with the kiddies.

The experience made me think about how, through these iconic movies, Universal did not just indulge or exploit our fears and our love of monsters – the movies organized our fears, fostered them, and made them reality. The theme park commodifies that fear and finds ways to monetize it. The whole issue seems so twisted, such a hall of mirrors; we go to theme parks to forget reality, yet this particular theme park celebrates the very movies that made our fears “real.” The wizards at Universal have turned these fears into safe theme park reality… and we are all pretty sure we will survive.

One example of what I mean: Adjacent to the theme park is City Walk, a touristy outdoor mall with lots of shops and restaurants. The movie theater there, the AMC Expensiveplex, features an iconic image from Bride of Frankenstein as its marquee. Is this Universal’s ironic comment on movie-going as a perennial dating ritual? 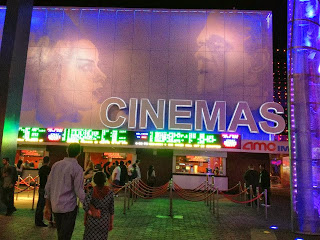 One of the many cool insights Tom Holland offered in his recent F This Movie! interview with Patrick was that “horror is a metaphor… it is infinitely malleable.” When we watch a conventional drama, we are concerned with the “reality” on the screen. In a horror film, there is certainly the reality of the specific narrative, but there is always something extra going on, an allegorical subtext that is inescapable.

I find it interesting how adept the original Universal Monster films are at getting at this subtext that so clearly fascinates us, and how adept Universal Studios has become at making attractions that capitalize on that subtext. Because the House of Horrors attraction is based on the original films, it is the perfect showcase for the metaphors of horror – the tropes and subtexts of these iconic films – and also how they are manifest in the reality of a theme park experience.

We have the horror of PLACE, be it a haunted crypt, the woods in the dead of night, the Bates motel, or the bowels of the Paris Opera… or the “Stage 13” building that houses the attraction itself, made to look like a spooky castle. They are all represented here.

The Wolfman explores the horror of CHANGE, and the House of Horrors attraction pays homage to that movie and werewolf imagery. We also experience that transformation in a much more immediate way as our environment changes; we step into the attraction and the gorgeous California sunshine becomes the very darkness of unpredictability.

We see the horror of SELF (a subtext in movies like Dr. Jekyll and Mr. Hyde or The Fly) in the hall of mirrors section, where we often turn a dark corner only to discover that we are being confronted by nothing scarier than… ourselves… reflected back to us in a shadowy, fragmented way.

The attraction’s centerpiece, as I mentioned, is a recreation of Dr. Frankenstein’s lab. Amid lightning, thunder, and Franz Waxman’s distinctive score, we hear repeated on an endless loop a line that was originally censored from the film: “In the name of God, I now know what it feels like to be God!” In the very center of the attraction (in its womb, if you will) the horror of CREATION takes center stage. Also, Ygor pops out at you and chases you with a hatchet.

I find it fascinating that Universal’s House of Horrors is simultaneously an exploitation of, and a catharsis for, our deepest fears.

Lastly, there is the horror of LOVE itself. We see this not only in The Bride of Frankenstein, but also in Universal’s Dracula, with its subtext of the horror of attraction (which is ironic, since the Universal Studios theme park is FULL of attractions.) I don’t know much, but I know that I love my wife and son, and I know that I love the Universal Monsters. In the documentary Fear and the Dark, actress Barbara Steele explains that we fear the things we love because we fear our dependency on them, fear what we will do because of our love, fear that we will lose control because of that love.

CAVEAT: During October, Universal hosts “Halloween Horror Nights” when they turn the WHOLE PARK scary, with special attractions, mazes, and hundreds of out-of-work actors playing roaming zombies. Yet I made the decision to visit during the day. How could I pass up the scare fest? Well, my non-metaphorical, subtext-free and very real fear of big crowds made the nighttime thing much less appealing. I also theorized that, since the regular day experience and Horror Night experience are separate tickets, the day might be a bit less crowded, because all of the creepy tourists-who-think-they-really-are-vampires would sleep during the day and choose to attend at night.

As we left the park at six, we saw thousands of people queuing up for the evening event. It was a sea of humanity, a roiling mob. And that is when I witnessed the SCARIEST thing I saw all weekend: Row upon row of metal detectors set up just for Halloween Horror Nights. Because GOD ONLY KNOWS WHAT REAL WEAPON SOME FREAK IS GOING TO TRY TO SNEAK INTO THE FUN THEME PARK CELEBRATING MAKE-BELIEVE HORRORS.

Don’t these “children of the night” know that when you try to make it “real scary,” it stops being “fun scary?” New item for the gift shop: a t-shirt that glows in the dark and reads, “I Got Shivved in the Churro Line At Universal Halloween Horror Nights!” 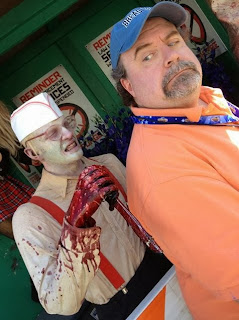